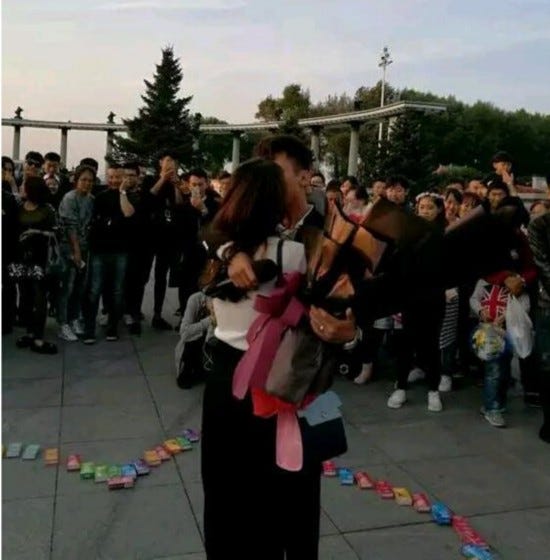 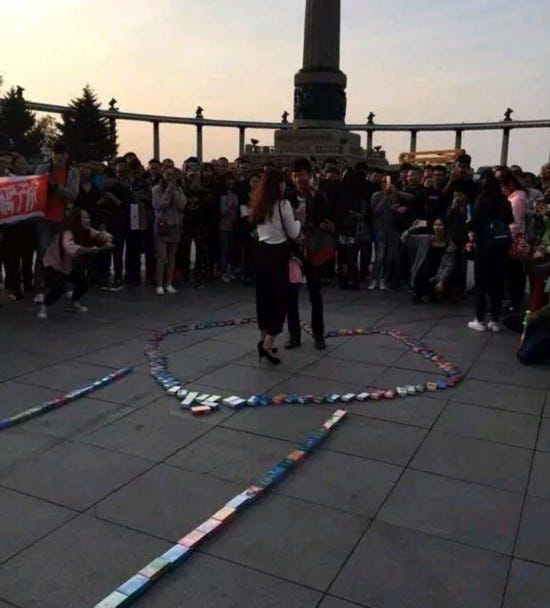 Daily Mail- Some buy flowers or prepare a romantic speech, but this man decided to confess his love to his dream girl using 999 boxes of condoms and a bouquet made from thongs. The man caused quite the scene in Harbin, northern China, on September 25 as he confessed his love and got down on one knee, reports the People’s Daily Online. He told her that a man on average has sex 6,000 times in his lifetime and he wanted every one of those times to be with her.

The man arranged the boxes in a heart shape and then held a bouquet fashioned out of thongs. He told the woman that he wanted to be her boyfriend. He told her: ‘From the moment I saw you, I knew I loved you.’ The man then told the onlookers that they could take the boxes of condoms for free. They were gone in just 30 seconds. The new couple were then seen leaving the scene in a Porsche.

What a fucking move out of this Chinese dude! Most chicks would probably slap the shit out of their boyfriend for popping the question they have dreamt about their whole life by using a bunch of rubbers and thongs as props. But not this chick. She is either a freak between the sheets or loves this dude more than oxygen.

And I know exactly what this guy was doing when he dropped a ridiculous stat about the average person having sex 6,000 times in their life. There is no way humans have sex 6,000 times, right? No way the Elias Sports Bureau approves that. The life expectancy in China is 75 years old. I don’t know when Chinese people start fucking, but I imagine it is usually some time during their teenage years. At that rate, we are looking at these Chinese SOBs fucking 100 times a year? Maybe an average guy busts a nut 6,000 times during his life. But there is no chance in hell that the average person has sex 6,000 times. Even though all these people scooping up those condoms in a millisecond like a seagull eating food at the beach has me thinking that there is more fucking going on in China than I realize.

My opinion is that this guy dropped the 6,000 number because he wanted his future wife to give him the green light on 6,000 or so romp sessions as an engaged/married couple. Brash and bold as all hell. Absolutely, positively no chance it happens, no matter how freaky his chick is. But an A for effort regardless.