This isn’t even close to the first time we’ve seen 11-year-old Aito Iguchi before (I feel like the kid has been 11 for the past 2-3 years). But he randomly pops up about once a year or so, and every time he pops up I’m left there staring at my computer screen thinking to myself “how the fuck did he just do that”. It’s actually a little depressing every time he shows up on the internet because I’m again reminded that a small child could dominate me in 1-on-1 unless I go Wolf “The Dentist” Stansson on him. 11-years-old and has some of the smoothest hands in the entire world, let alone just Japan or just kids in pee-wees.

Just imagine what 7 more years of development in Canada and coaching from Pavel Barber is going to do for this kid. And yeah, he’s a small little guy. Sure, this kid would be toast 20 years ago before guys like Kane and Gaudreau* came around to prove that hockey is a little man’s game too. Like Johnny Hockey said,

So all you have to do is make sure you put an enforcer out there with this kid. Maybe import a sumo wrestler from Japan to play on his left wing and fuck anybody up who even thinks about taking a run at him in the corners. Then let his hands and quickness take care of the rest. If the Edmonton Oilers could suck so much for so long just to get their hands on Connor McDavid, it’s not too inconceivable to think another team could take that course and blow for the next 7 years to make sure they have a squad ready for Aito Iguchi in 2023.

*turns out that their playing style isn’t the only thing that Johnny Gaudreau and Aito Iguchi most likely have in common. They probably rock the same flex as well. 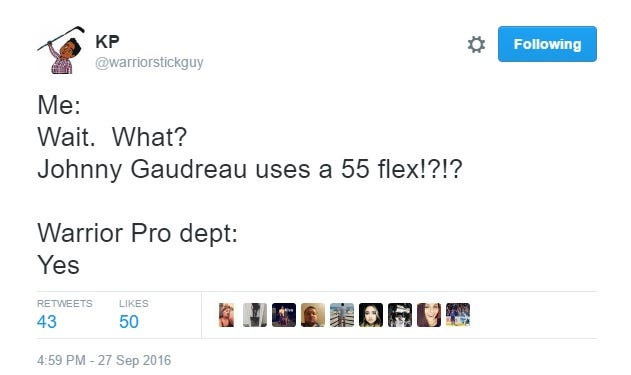 Good news for Johnny is that if he ever breaks his stick during a game, he can just grab a back up from one of the Mites On Ice.