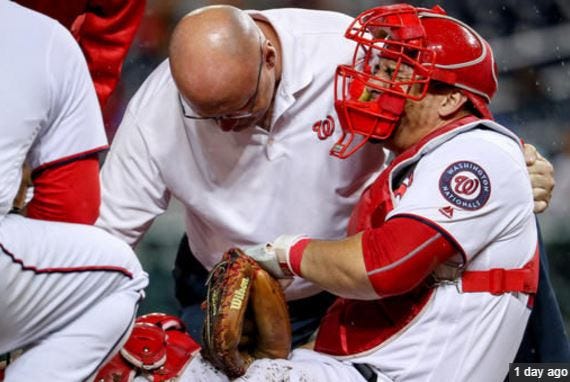 Losing Wilson Ramos sucks. I’ve been a big fan of Ramos’ well before he developed into the dominant catcher that he has been this season. While Ramos’ season-ending injury is a major blow both to the Nationals’ roster and to Ramos’ contract hopes when he hits free agency this offseason, it is not as big of a disaster as we might fear that it is.

Ramos’ season-long stats still look gaudy – and they are, especially for a catcher – but 2nd half Ramos is nowhere near the star that he was during the first four months of his 2016 campaign. Through August 7th, Ramos was hitting an astounding .338/.387/.566 with 18 homers as a CATCHER. Those are MVP numbers. In 2012, Buster Posey, the last catcher to win an MVP award, hit .336/.408/.549 with 24 homers over the course of a full year. Anyways, since Ramos’ incredible start, he has floundered. I’m no longer talking about the wonders of LASIK eye surgery and how it can turn an impatient and below-average offensive catcher into a legitimate MVP candidate.

From August 8th until his saddening injury, Ramos lit up the stat boards with a blistering .232/.272/.352 and while he had started to get hot in his final 10 games, his contact rate was back at (or below) his career marks and he had not taken a walk since September 12th. Ramos is an extremely likable player but if he keeps hitting like he has for the past month and a half, how much will the Nationals really lose? Jose Lobaton is nothing special and is certainly less talented than Ramos but Pedro Severino is a skilled defensive backstop and could platoon with Lobaton during the post-season.

To reiterate, I love Ramos and I’d love to extend him because I do believe there is a space for him on this team and I think that he will ultimately find some sort of middle ground between the super-human April-Early August Ramos and the very mediocre Ramos that has played in DC since 2010.

I feel terrible for Ramos missing out on some potentially big money in free agency but his injury has also created an (unwanted) opportunity for Mike Rizzo to re-sign the Buffalo for a much more team-friendly price. Further, while I would have loved to have a .307 catcher in my lineup in the NLDS, it would be silly to expect Ramos to actually play as well as he had in the first half of the year. I wish Wilson Ramos a very speedy recovery and I hope he’s rocking a curly W in April 2017 but, in terms of winning in 2016, his injury should not be as big a hindrance as we are anticipating.