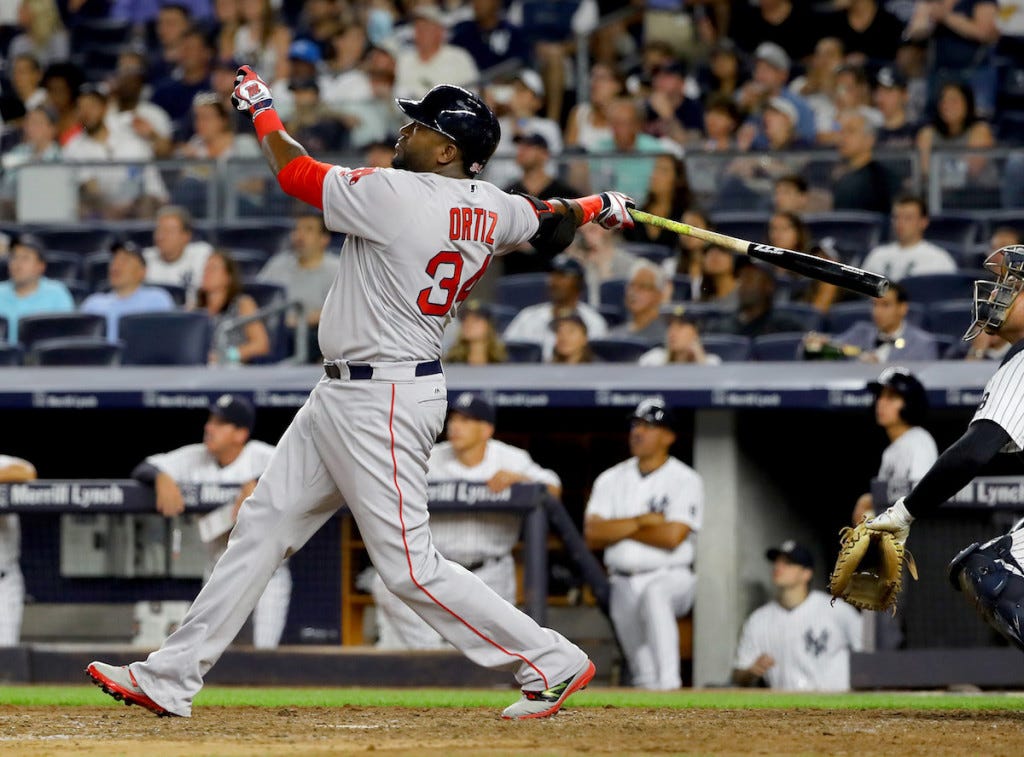 The other day, one of my teammates comes over to me in the clubhouse and says, “Hey, you see what they’re gonna do to you in New York?” I don’t know what he’s talking about. I’m like, “What’s up? They gonna give me a pizza or something?” He says, “Nah. Your last game, the fans are gonna pull their pants down.”

I’m like, “Nah, bro. Come on. Be serious.” Then he shows me an article on his phone about some guy who’s trying to get everybody in Yankee Stadium to moon me. This dude even made a whole website: moonbigpapi.com.

Bro. Come on. Let me tell you something. If 50,000 people moon me, I promise you two things. First, I’m gonna laugh so hard I might start crying. Then when the tears dry, I’m gonna step up to the plate and try to hit the ball all the way to the choo choo train. You gotta be careful. You guys don’t have Mariano no more, you know what I’m saying?

Ortiz had a piece in the Players Tribune today, reflecting on his career against the Yankees, and how they’re such a popular team in his native country of the Dominican Republic. He talked about how it’s just different when he plays against them, and how Manny Ramirez, Pedro Martinez and he used to say, “Alright, how we gonna take these motherfuckers down today?” Yankee fans have been booing Ortiz for 14 years, but little did they know that they were only increasing the odds of getting punished by the DH as a result of their public display of disdain.

When I’m standing in the on-deck circle and I hear all those boos, I get this feeling I can’t even describe. I’m so focused. My adrenaline goes through the roof. I’m totally locked in. The intensity is just not the same against another team. Some players are born to be Yankees, you know what I’m saying? I was born to play against the Yankees. Boston is not just my team. Boston is my city. I consider myself a Bostonian, and it’s the thing I’m most proud of in the world.

Ortiz also thanked Yankee fans, despite their hatred for him.

Yankee fans, I got one final thing to tell you. Thank you. For real. You pulled the best out of me. When you boo me, it’s one of the best feelings in the world. I’m not gonna lie to you. Sometimes I get outta bed in the morning, and it’s like, Damn. What happened? I got old. It takes me a long time to get my body ready for these games now. But I guarantee you this. When our bus pulls up to Yankee Stadium today, I’m gonna be ready to go. And when I hear you boo me, I’m gonna try to hit the ball over that white fence, all the way to the motherfucking choo choo train. Respect.

It’s not like that in the Bronx. You were nearly single-handedly responsible for Yankee fans’ favorite team being attached to the greatest collapse in the history of the sport for the rest of eternity. They’re going to boo the shit out of you. And when they do, I can’t wait to watch you hit a baseball all the way to the motherfucking choo choo train.