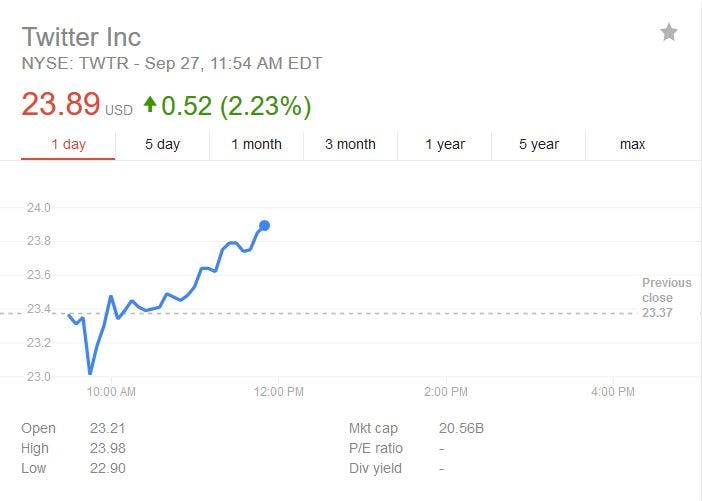 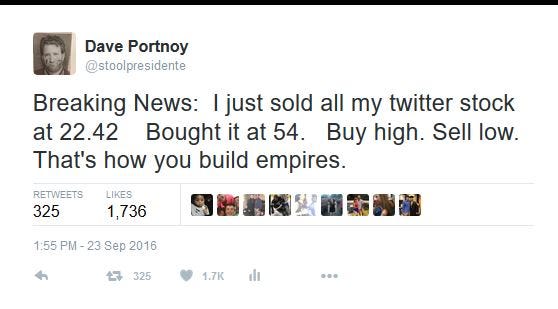 So Twitter stock is on fire lately. It’s up like a bazillion percent since last week after buyout rumors circulated. First it was Sales Force.com who was rumored to by them. The stock jumped from 18 to 22. Twitter stock hadn’t been at 22 in like 4 years. Well being the shrewd business man I am I sold the shit out of it at 22.42.  Why did I do this? 1. Because I owed my bookie a billion dollars.  2. Because I’ve seen this song and dance a thousand times with Twitter. It goes up and then it ALWAYS goes back down. They’ll release their earnings or some shit and it will suck. So finally I was like you know what I’m gonna sell this shit. And right off the bat it seemed like a genius move. Twitter dropped to 21 after I sold it. Salesforce.com said they weren’t buying Twitter because Twitter sucks. Everything was coming up Pageviews.

And then that Nazi fuck Walt Disney came from the rafters and said he was gonna buy Twitter. Now Twitter is back on the move. It’s close to 24 bucks. Do you know what the only thing worse than buying twitter at 54 and selling it at 22 is? Watching it skyrocket back to 54 while you sit on the sidelines after keeping it for 2 years while it sat in the toilet.  I’m so fucking mad right now I could strangle Hank. There is literally no company in the world that has tormented me quite like Twitter the past couple years. I need them to go bankrupt and I need them to go bankrupt tomorrow. Nobody pulls the wool over me eyes and gets away with it.