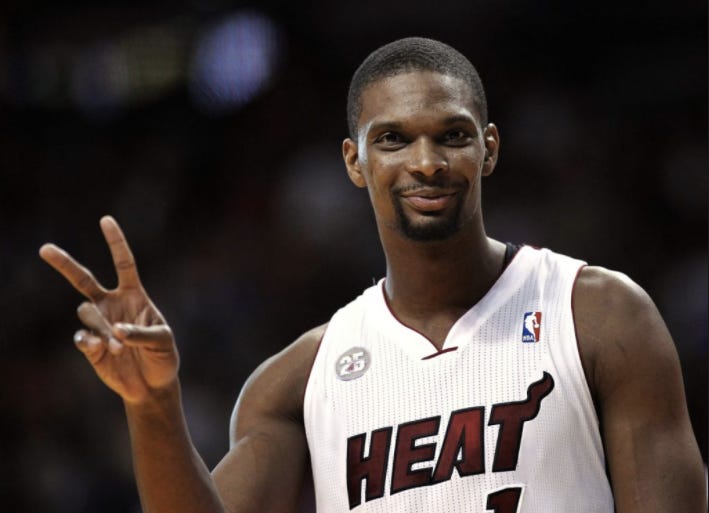 MIAMI (AP) — Chris Bosh has failed his physical and is not being cleared for training camp by the Miami Heat, a person with direct knowledge of the situation told The Associated Press on Friday.

The person spoke on condition of anonymity because neither Bosh nor the team has made any announcement. It’s a major blow to the All-Star’s comeback plans and a decision that will likely add to the tension between the team and its highest-paid player.

Bosh has gone through a series of medical tests in recent days, and the results apparently were not enough to convince Miami that he’s able to play – at least, not yet. The team holds media day in Miami on Monday and starts training camp in the Bahamas on Tuesday. It’s unclear if Bosh will even be present for those events.

If this isn’t a case of the MIA doctors being shady and that slime ball Pat Riley trying to get out of the Bosh deal, then this fucking sucks. On behalf of myself and all of Barstool Sports (not sure if I can do that but ¯\_(?)_/¯) I want to start by wishing Chris Bosh nothing but best as he continues to fight to get healthy. Since sitting out the second half of 2015  due to blood clots, beating it, having it come back if that’s what this is, is a total gut puncher. While Bosh is 32, he still has a lot of basketball in him, good basketball at that, so this sucks for anyone who loves watching him play.

Basketball reference says he has a 99.5% to enter the HOF, and I don’t know how you possibly debate that. As a Celtics guy, it feels weird to talk this way about Bosh, but I feel responsible since we “battled” him in the Atlantic for 7 years, and then had an actual rivalry during his 6 or so years in Miami. In fact, maybe the most impressive part of his entire career might be the fact that I don’t really hate Bosh, despite him being on those Heat teams. It’s weird.

Bosh is an interesting case when evaluating the great talents in NBA history, because his HOF career might be the quietest I’ve ever seen. Bosh is really, really good, yet there is a perception around him that doesn’t really fit his accolades. Here’s a guy who made 11 All Star Teams, but only 1 All NBA (2nd team) which came in 2006, and to me that wasn’t even the best year of his career. For me it’s his last season in Toronto when he put up a 24/10 with 51% shooting and yet, nothing to show for it. How can a player who is that consistent, been an All Star for so long, not truly get the recognition he deserved? Probably because he played in fucking Canada for a shitty Toronto team, but it’s still a injustice.

What impresses me about the career arc of Chris Bosh, is how he evolved his game. He was never going to be that big, back to the basket bully type player, so as the league shifted in its current style of play, that suited Bosh perfectly. Much like when Boston formed their own Big 3, there were questions on how Bosh would adapt no longer being the top dog. Well, he responded by being arguably better. The biggest change in his game, in my opinion, was the development of his three point shot. With players like Dirk/Anthony Davis/KAT/Olynyk/Porzingis being who you think of when talking about three point shooting big men, Chris Bosh turned himself into a 34% shooter for his time in Miami, including 37% last year. Like the great players do, he learned how to adapt in his later years and made it into a legitimate weapon. Yes, I’m still salty thanks for asking asshole.

So it sucks to have to see a HOF talent have to walk away from the game early because the NBA is better with Bosh in it, and this just adds to the list of Kobe, Duncan, and most likely KG. Look at those names, that is basketball royalty. At this point life > basketball, and he’ll probably end up at ESPN doing studio work which will be great.

Now quickly, for the Celtics, this isn’t the worst news. First Middleton goes down in MIL, now this, it’s looking more and more like a three team race in the East. And hey, I’m not sayin, but it may be a good time to do some research on a certain team’s expectations, and then once learning that information place a certain amount of capital on it. Not saying, just saying.