Professional dancers who have trained their whole lives in ballet are not thrilled to see the 20-year-old model and reality star slip on point shoes and bounce around a dance studio in a tutu like it’s all some kind of JOKE. After all, they endure grueling rehearsals, years of wear and tear on their bodies from training, and a lifetime of calluses. 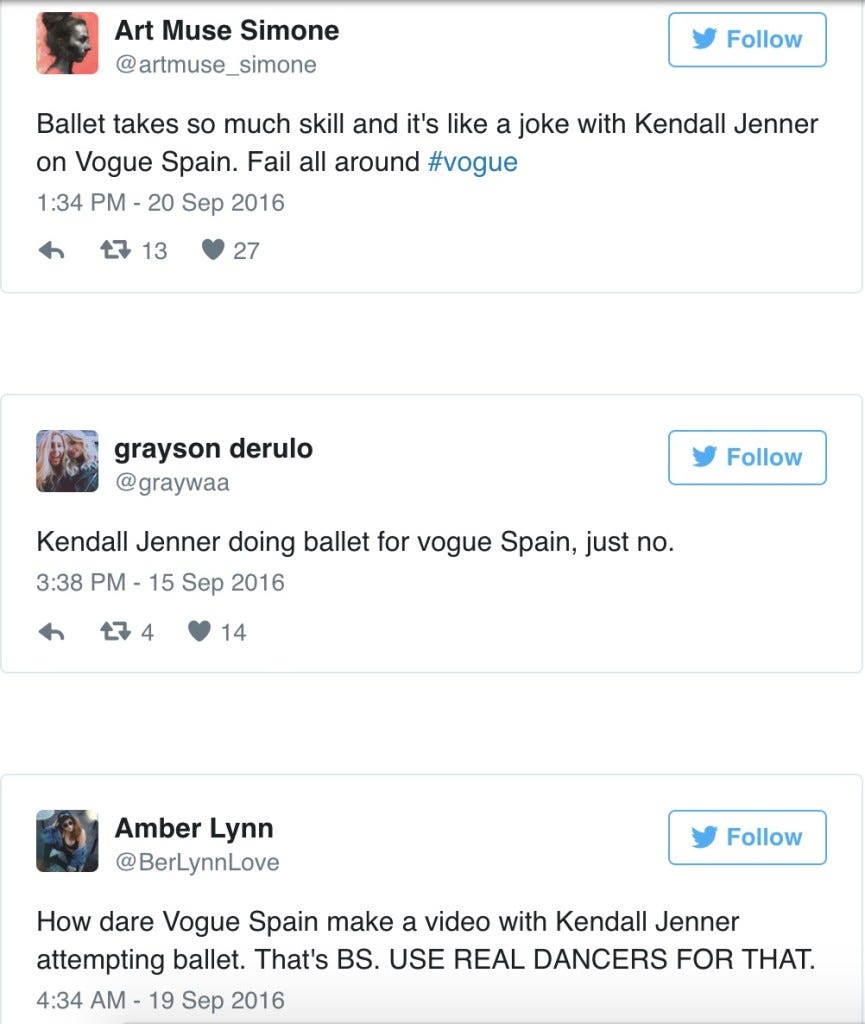 Sometimes I see these articles when looking for something to blog about and I’m genuinely not sure if I’m seeing a parody or not. I mean yes people obviously look for any reason to get offended in general these days and yes people in particular have so much disdain for Kendall Jenner and the fact that she’s taken seriously as a high fashion model primarily because of her famous name…but bitching about her dressing up like a ballerina for a photoshoot? They dress famous women up like all sorts of shit for these things, I’m positive I’ve seen hundreds of these where women are on a boat wearing a captain’s hat but you don’t hear the Yachtsman lobby being like “Whoa now, can she tie a clove hitch? Use a real man of the open seas instead.” No one wants to see some chick with Asian girl binded feet on the cover of Vogue Spain, they want Kendall Jenner there dressed up as if she knows the difference between a plie and a set of pliers. Hell you could put her in a fake Harambe outfit like our PR firm did with a girl on the Rundown a week or so back and it’d still sell more covers than a million ballerinas with decades of training. No one fucking cares about “real” ballerinas, get over yourself you graceful mangled-footed monsters.

And while I’m on the subject, enough with how seriously every girl takes the fact that they “danced” at some point in their life. It’s not some fucking secret society you were in as a child or teenager so why does every chick who’s done it brag about it for their entire lives? If you’re a cheerleader or dancing professionally anywhere that doesn’t have an open buffet with gonorrhea sprinkled all over it, then fine, talk about how much you love to dance and have done it since you were five and sacrificed hours to be great at it. If you’re a girl working in fashion who took jazz tap when you were a kid and now take one Zumba class a year, maybe avoid busting out “how important dance is to your life.” There are scientists who don’t take themselves as seriously as a chick who took dance growing up.