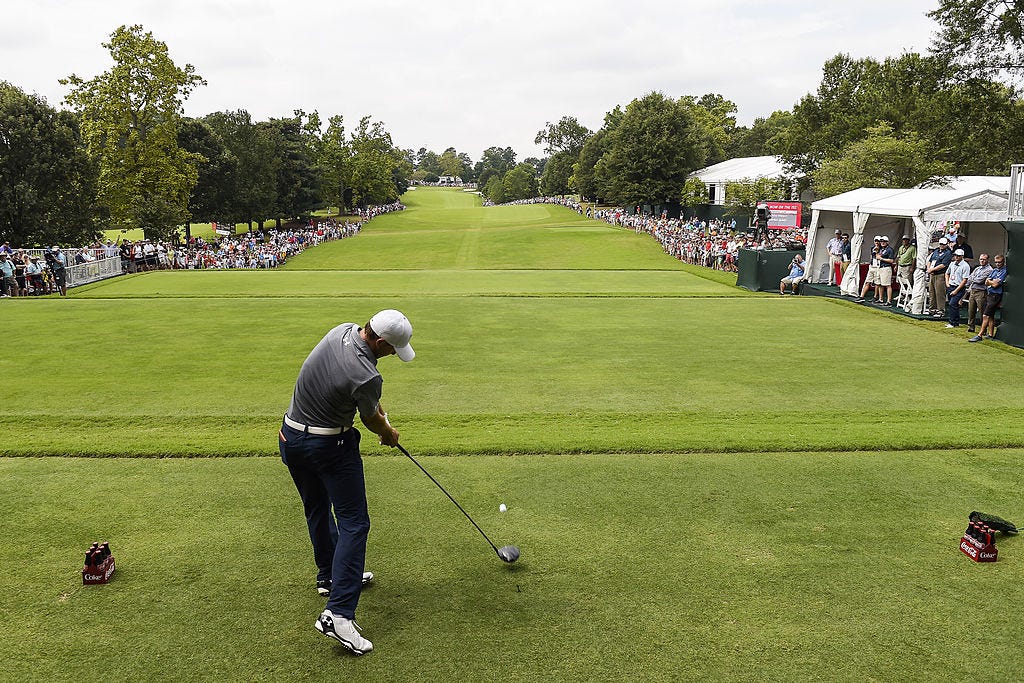 Ten million dollars, that’s the prize for winning the FedEx Cup. Although only those in the top-5 in FedEx Cup points are guaranteed to win the $10 million if they win at East Lake, the last 8 winners at East Lake have also secured the FedEx Cup title. So it’s damn likely that if you focus your ass on winning this week — and you pull it off — you’re in for a nice little Tour Championship + FedEx Cup $11.5 million payday.

The PGA Tour introduced the FedEx Cup Playoffs in 2007 in an effort to inject passion, excitement, and drama into the Tour’s early fall events. By all measurable accounts, they’ve succeeded. It’s the best players playing top courses for a shitload of money. What’s not to like? 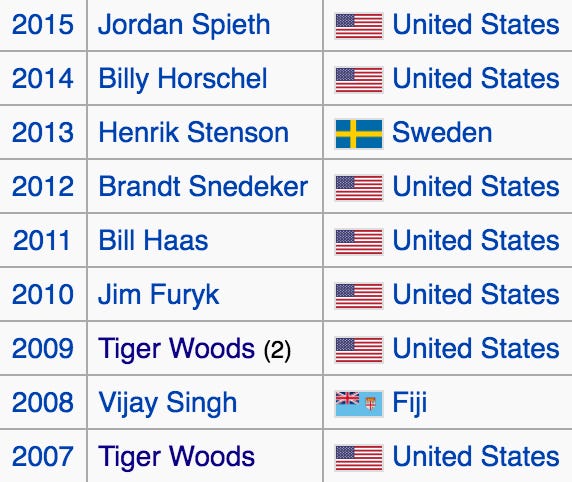 You don’t really win this thing by fluke. You gotta be good all year and then be the best at the end. It’s grueling. It’s tough. It’s competitive as fuck. It’s the Tour Championship at East Lake — let’s do it. 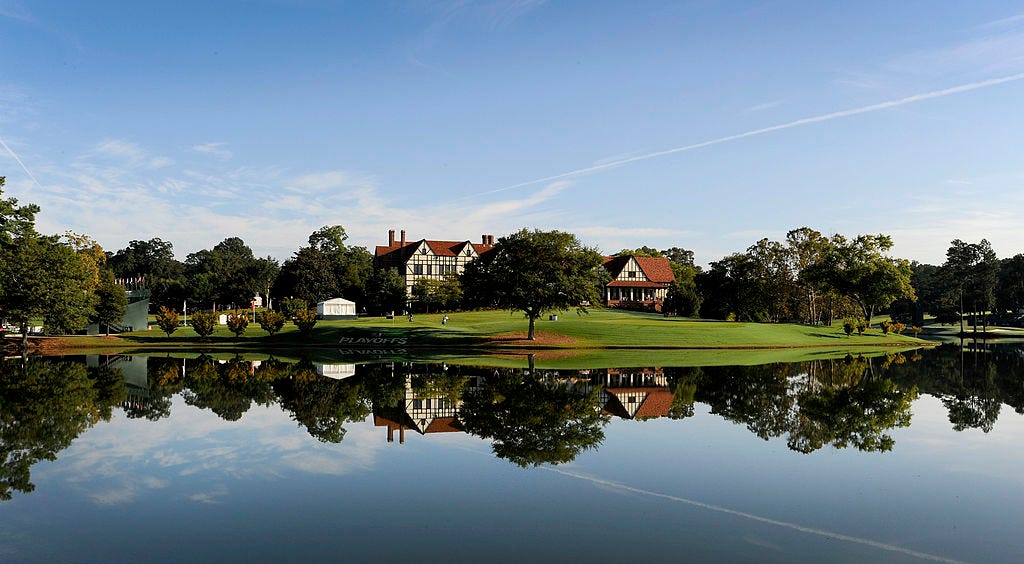 East Lake’s fucking awesome. Water, trees, a 600-yard closing par 5 and a beautiful clubhouse. The home track of legend Bobby Jones, East Lake tips out at over 7,300 yards, plays to a par 70, and has defended itself fiercely over the years. In 5 of the last 8 Tour Championships, the winner’s come in at single digits under par. We like that.

Important to note that the nines at East Lake have been switched this year. Front nine is back nine. Back nine is front nine. Up is down. You get it. 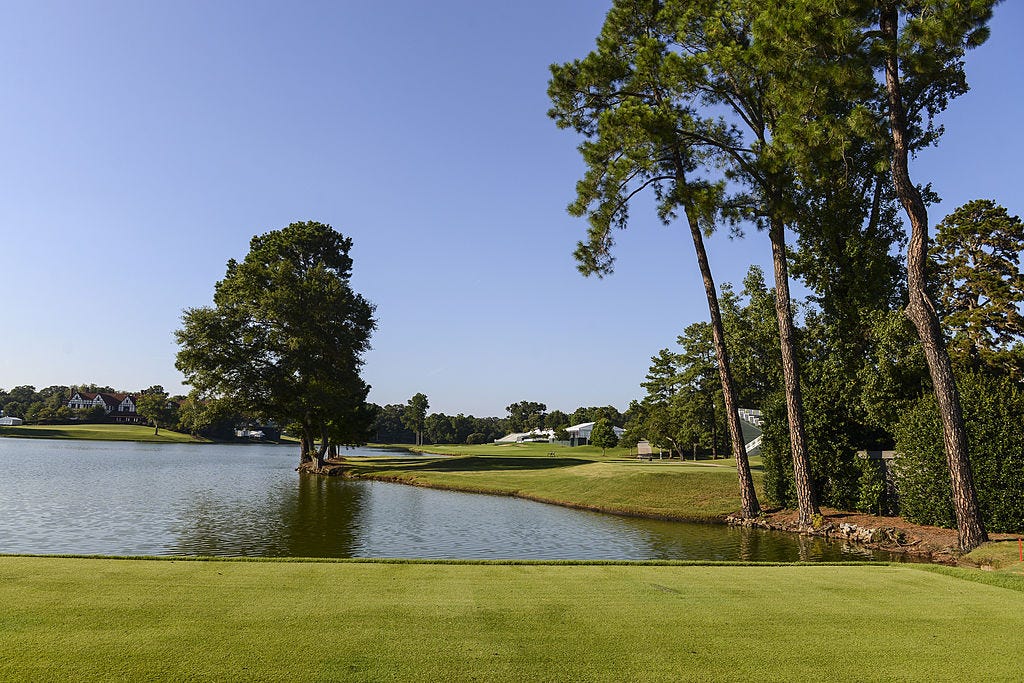 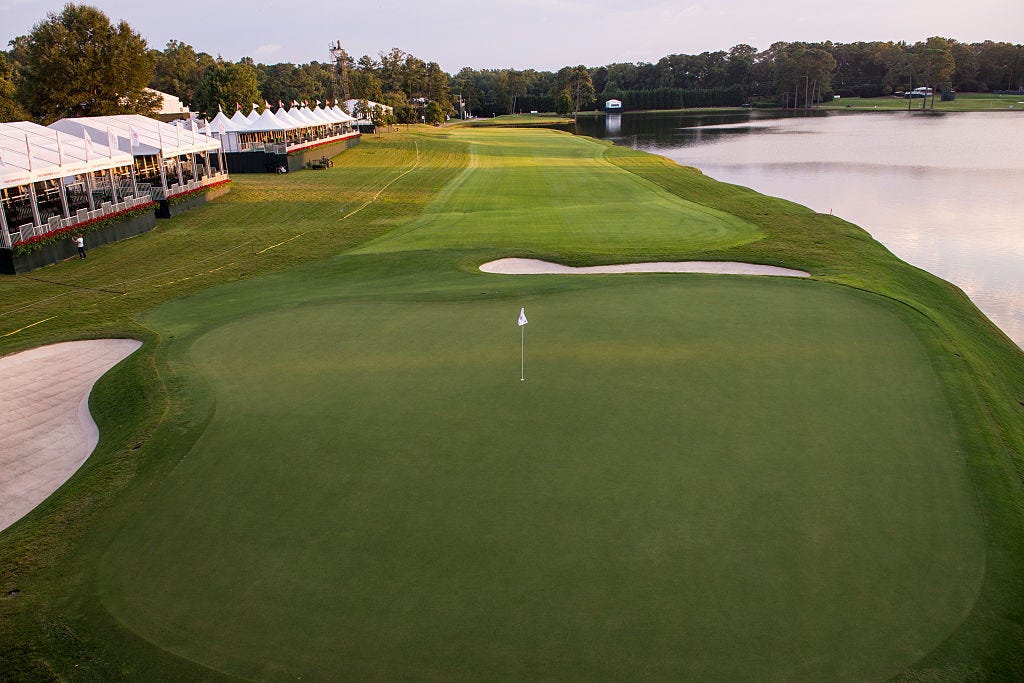 A world-class hole, the 8th (previously 17th) has become one of the more famous 4-pars in the game. Water hugging the entire left side. Trees narrowing the tee shot. Bunkers and heavy rough guarding any bailouts to the right. The 8th has been the stage for both extremely expensive and extremely profitable shots.

Bill Haas famously got up-and-down from the pond in a playoff to eventually win the FedEx Cup in 2011.

The hole’s not overly long, but its lurking trouble provides a stellar venue. Awesome hole. 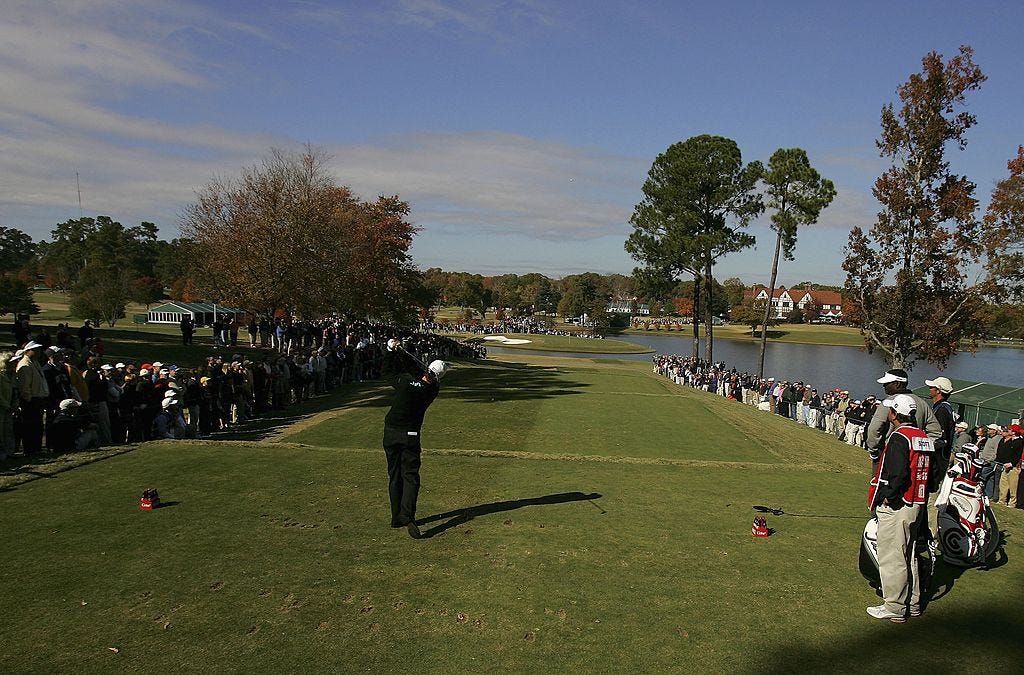 Basically an island green. Think 17th at Sawgrass, plus 80 yards. That’s the view from the tee. Sure, you can bail out slightly left, but anything a little short, a little right, or a little long is toast. A beast of a par-3 now positioned in the closing stretch can make or break your tourney. 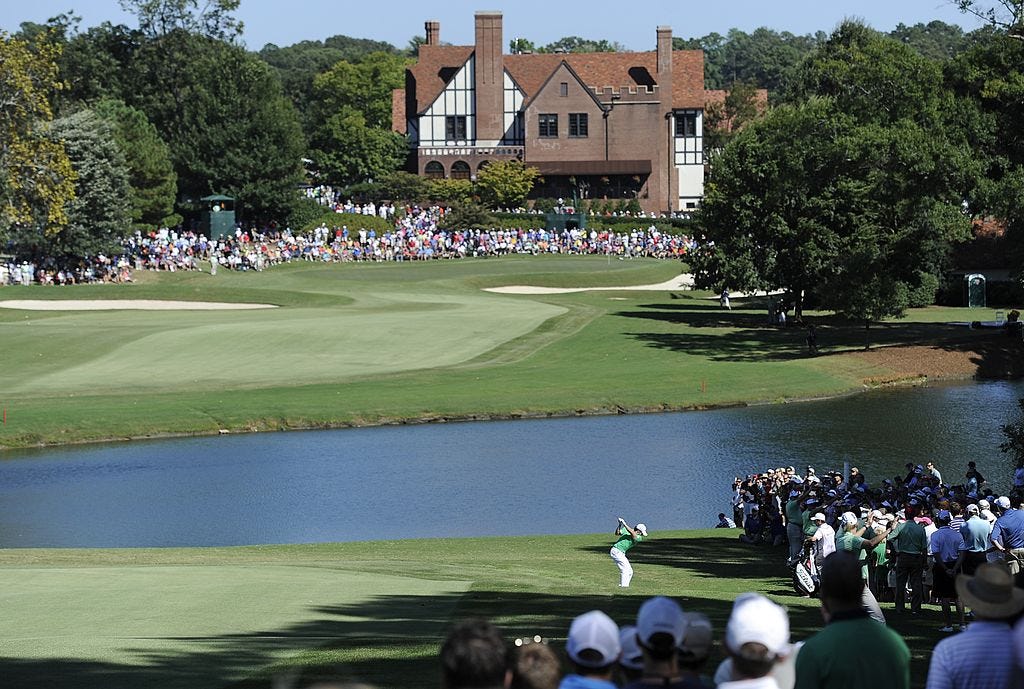 With water, layered bunkering and that lovely clubhouse view (you all know my affection for clubhouses), I sure like the 18th. That’s the view from where the boys will be trying to reach in 2. A good drive makes getting there no problem, but hit it in the wrong spot and 4 becomes 6 reeeeal quick. With the nines switched this year and this par-5 serving as the closing hole, we’re all expecting and hoping for serious drama here come Sunday.

The top-5 in the standings are auto-FedEx Cup winners with a win this week. Nothing can stop them. Here they are in order:

The favorite? This guy.

Best b-day ever! I love you @paulinagretzky

Here are the next 5. These guys also have a great shot if they win, but will need a little help:

Rory and Spieth have been shit on for having down years, but Spieth’s won twice and finished runner up at the Masters and Rory just won in Boston. So who knows. Rory’s also second in line for the bettors. 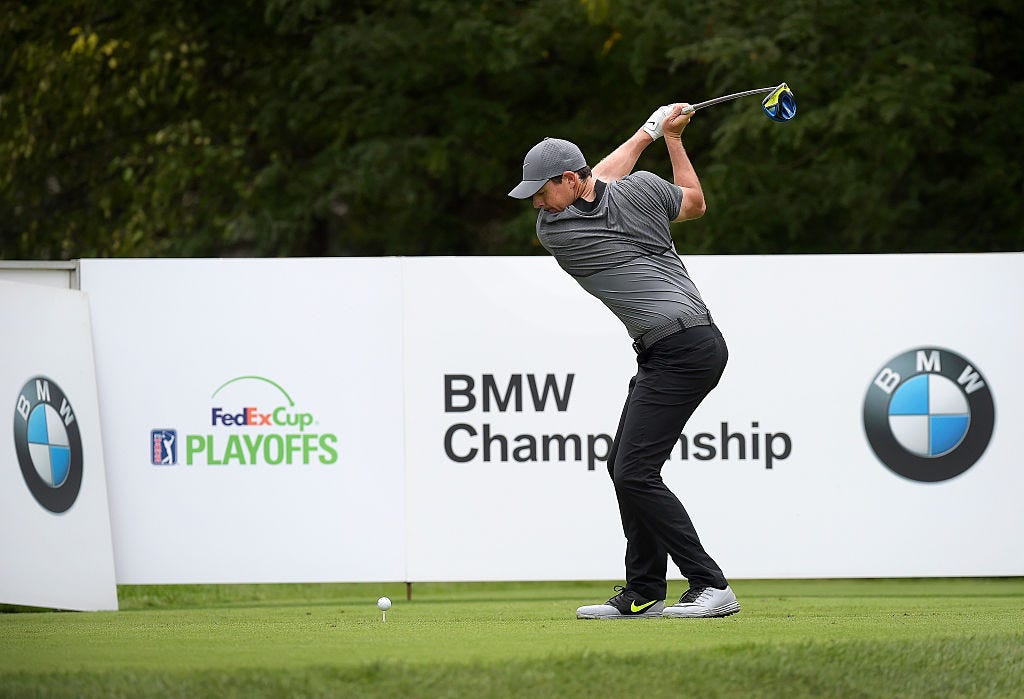 There is just one remaining question going into the Ryder Cup and that is who will be the 12th and final member of the American team. The golf world has essentially boiled it down to 3 (kinda 4): Bubba Watson, Justin Thomas, or Daniel Berger. Bubba is the historical and experienced choice, but he’s clearly not beloved in the team room and his RC record stinks. Thomas and Berger have both won this year and are the “hey let’s get some new fucking blood in there” choices. I favor Berger for recent form (top-10 in 2 of last 4 stars versus Thomas, 2 missed cuts), but my guess is the team favors Thomas (boys with Fowler/Spieth, spring break crew). 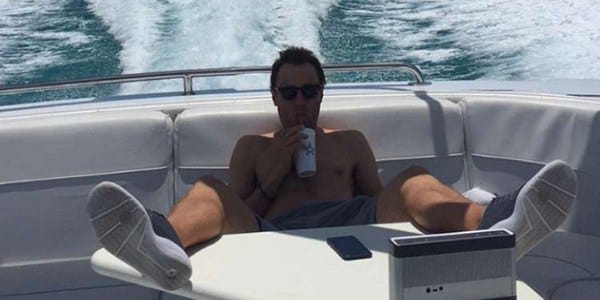 Like I mentioned earlier, more winners have finished single digits under par than double digits in the Tour Championship’s last 8 runnings. The nines have been swapped and the track is looking tough, but these guys are just so damn good. DJ just rocked Crooked Stick with a whopping 23 fucking under. I think 12 wins East Lake.

I don’t like it. I don’t want it. The last thing I want to see going into Ryder Cup week is the Euro’s biggest weapon winning golf’s most lucrative prize. But this fucker has tweaked his putting, won 2 events ago in Boston, and seems to always rise to the occasion come Ryder Cup season. We’re less than 9 days away from balls in the air at Hazeltine, which means Rory starts to rip it up.

The cheeky little North Irishman wins it this week. Not a terrible bet at 7 to 1. (I always put hundo spot on my pick, btw. not a profitable habit.)

It’s getting hard. Real hard. The year’s best 30 golfers are all here and all looking for some serious paydays. If they were playing like shit, they wouldn’t be here. That’s the nature of the playoffs. So how do you pick DFL? Well, you look at Sean O’Hair. This dude’s a rollercoaster. He’s 25th in the standings and finished 52nd at the BMW (out of 68 players). Sorry Seano, DFL coming your way. Especially with this droopy ass body language. 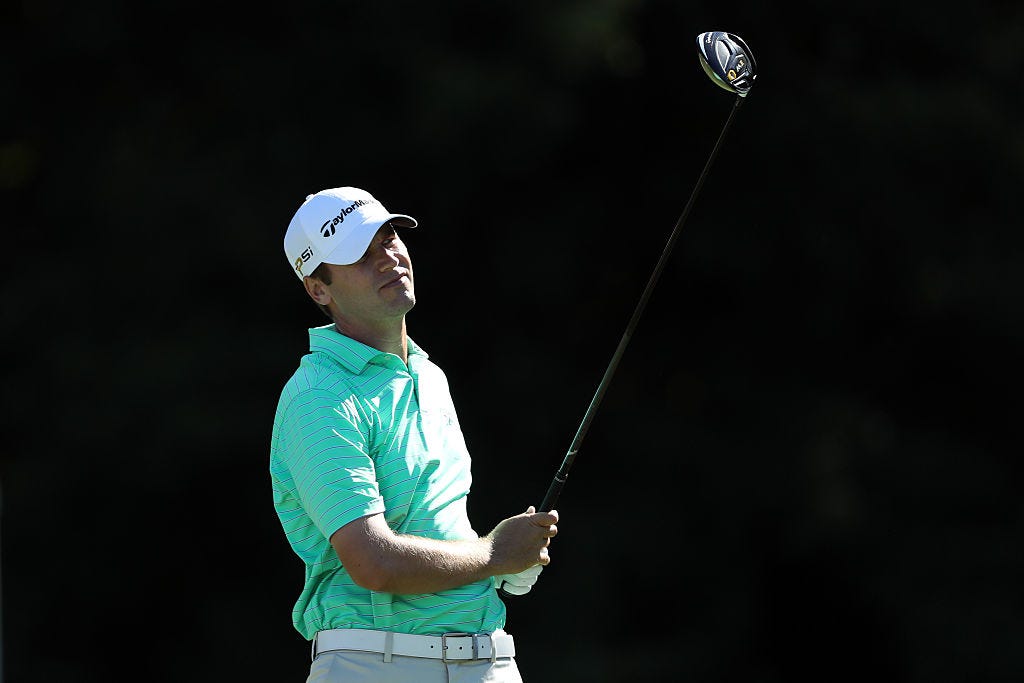 Last event of the season. One week until the Ryder Cup. The next time I write about a PGA Tour event, Tiger Woods will be playing. Think about that. Let that sink in.

Speaking of Team USA and Ryder Cup and Tiger Woods, Lee Westwood threw out some early bulletin board material. Fuck Europe. I’ll leave you with this. (via CNBC)

“I don’t know what impact there will be from having Tiger around,” Westwood said to ESPN.com. “They have always struggled to find a partner for Tiger that’s been successful. He could have an adverse effect in the team room. People have always seemed to try to do too much when they have partnered him. It might be different if he’s one of the vice-captains, you don’t know.”

“The captain is obviously building them up a lot and making a few interesting decisions. They have got a strong side and probably are favourites, but they haven’t won it for a while and they are playing in front of a home crowd. There is a lot of pressure on them. That is going to keep building in the next week or so and by the time the Ryder Cup comes around, it is going to be pretty intense for them.” 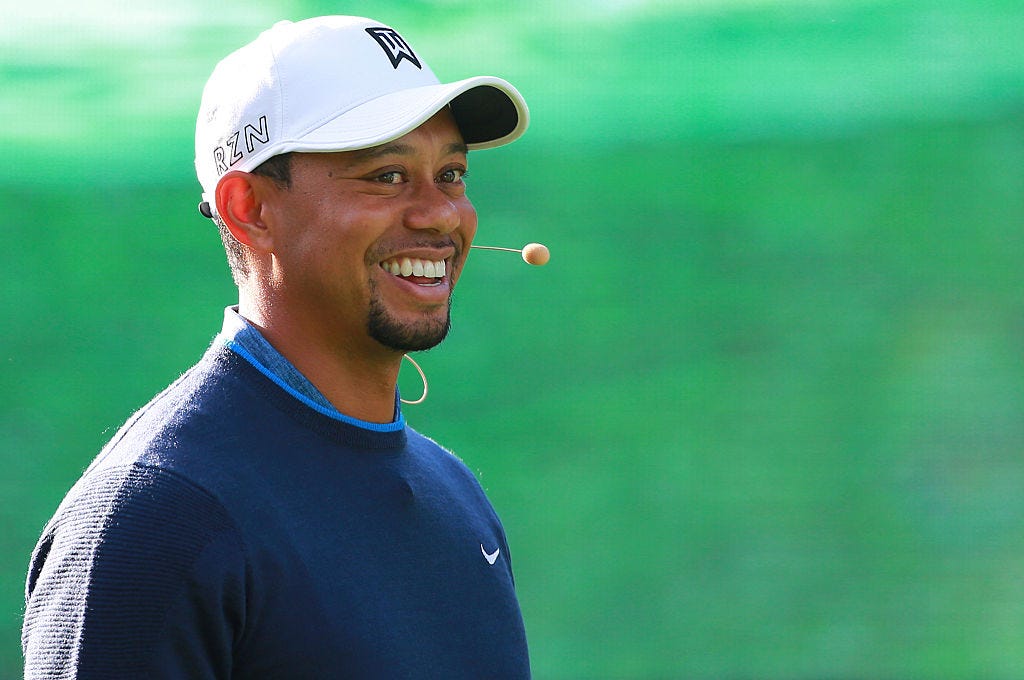