USA Today – North Carolina is coming off a brutal 70-41 loss to East Carolina, the Tar Heels’ first defeat of the season and second in two years to the Pirates. The loss also knocked UNC out of the polls. Good thing the Tar Heels have Caleb Pressley, the self-appointed Supervisor of Morale.

“It’s just cool,” Pressley says, smiling in his office. “No one’s argued it. I think I’ve lived up to the title.”

Pressley is a UNC senior, technically a student manager for the football program he’s been a part of these last four years. For the first three years, he was one of UNC’s backup quarterbacks, trying to work his way up in the pecking order. He lost any and all ground he’d gained last spring, when he skipped all of UNC’s spring practices while studying abroad in Scotland. When he returned to Chapel Hill, he realized it was time to retire from playing football. His coaches realized they might have another role for him.

So Pressley began his new role as UNC’s play signaler. He’s made the most of his new position — claiming office space down the hall from the coaching staff (and decorating his office walls with Fatheads and a poster of Eastbound & Down’s Kenny Powers) while also raising the bar for signaler fashion nationwide.

Pressley isn’t sure where he got the idea to do this — “I like to think it just came to be in a very vivid dream,” he says — but he pitched the concept of him wearing former UNC players’ NFL jerseys on the sidelines. Fedora liked it, and the ACC, NCAA and Nike all approved it. “They said it hadn’t been done, so we thought we’d be the first to do it,” Fedora says.

“What’s better for morale than being in a win-win situation?” Pressley says. “The players we wear I think are happy. I know I’m happy because I get to look kind of cool on the sideline. I think recruits would like it because they see Carolina puts players in the pros. I think fans like it. They tweet at me all the time and ask what jersey I’m going to wear — and tell me what jersey I should wear.”

He loves that people care, that they’re happy. Same with the players, his former teammates. That’s really what being the Supervisor of Morale is all about.

“I do signal in plays, but the rest of the time I take it upon myself to be what other people need me to be,” Pressley says. “I know everyone so well because I’ve been here for four years. I obviously know the quarterbacks really well. Part of it is building relationships and knowing what people need you to be — and being that for them.”

“All I have to do is come in, signal plays, talk to my friends and dance around on the sidelines.”

I will give Caleb Pressley this. If there is ONE thing that UNC football…hell, UNC athletics in general…needs right now, it’s morale. Like you just can’t get dragged through the mud and beat up and stomped on anymore than UNC sports has in the past few years. Just story after story after story of some sort of shady shit going on. Big time investigations making national headlines about how all your athletes take made up classes. Past superstars putting you on blast to any media outlet that will listen. Whistleblowers, plagiarism, postseason bans, lost scholarships. Giving up 70 points to ECU and dropping out of the polls in most recent on the field news. Just one disaster after another. Enter – this laid back chilled out bro motherfucker in his NFL jerseys. 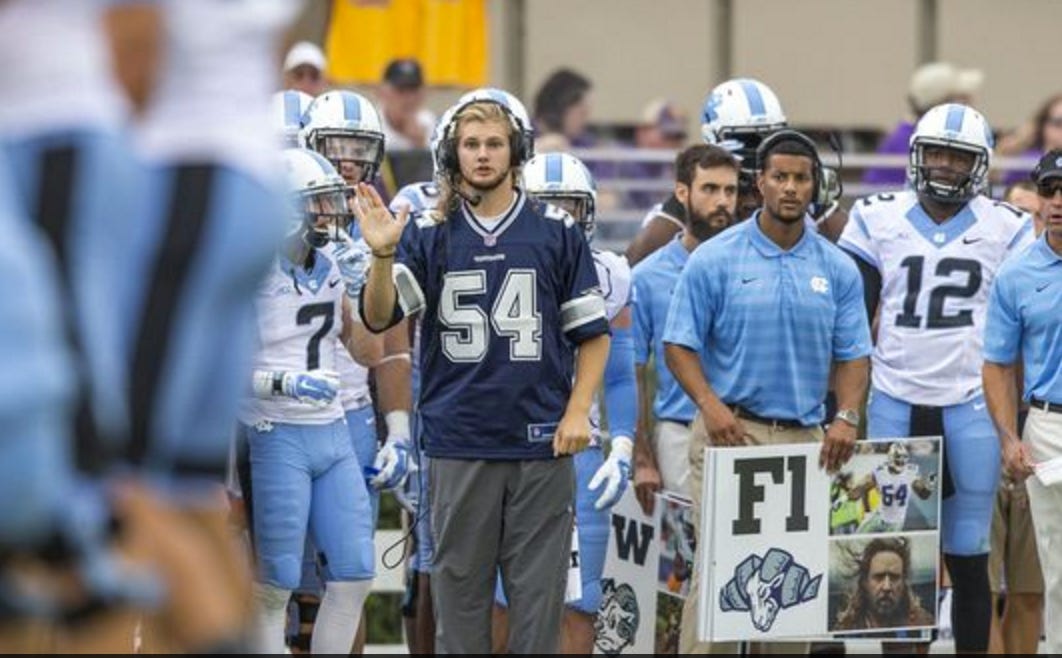 Signaling plays, talking to friends and dancing on the sidelines, just what the doctor ordered to turn things around. Can feel the morale building already.