I hate myself for writing this. I HATE myself. Not just a little hate, either. I’m talking the kind of hate that Bart Hubbuch must feel every time he looks in the mirror and realizes it’s time to go to work. A place of work where his gray, old ass is a paid version of a child whose mother just banished them to their room so they’re lashing out at random people on the internet. As I sit here and write this, I feel the exact kind of shame that Bart Hubbuch feels when his kid says, “Dad, I’d really prefer you not come into career day. All my friends know what you do, we do the same thing.” I feel gross.

Every thing about this is pathetic. It’s pathetic that the state of football in New York City is so weak that the only way its beat reporters can maintain relevance is trolling New England fans. It’s pathetic that the economy is so bad that a father must resort to prepubescent antics just to keep food on his family’s table. It’s pathetic that I have to write this. I fucking hate every single second of it. I’m actually having a little panic attack as I slam the keyboard because it just feels so sad.

But, I’m a guy who calls a spade a spade and Bart is the most pathetic man on the world wide web. It’s no longer up for debate. He’s a New York writer who makes Jets fans like the Patriots. That’s a feat so incredibly impressive it belongs in the bible. But even more impressive than that fact is the one that Bart manages to convince himself that he’s somehow the bastion for all that’s right. In his truly fucked up and sad head, he’s the voice of the people. Bart is doing the world a service by obnoxiously pointing out that the New England Patriots have never had a black quarterback, ignoring the fact that the New England Patriots haven’t exactly had a lot of turnover at the quarterback position and two men have started for close half of the franchise’s existence. It’s absurd I even have to write this but the Boston Patriots also drafted a black quarterback with their first ever draft pick. They also had the first black coach in the history of the AFL, Rommie Loudd. It’s fucking bullshit that I have to say that, almost like I have to brag about not being a fan of a racist franchise in 2016. But it’s even more bullshit to accuse an entire region of racism, a pretty loaded word, because we haven’t had a black starting quarterback in 57 years, despite the fact that plenty were drafted (Michael Bishop, Rohan Davey, and Jacoby Brissett to name a few) but never got a chance to start because Tom Brady and Drew Bledsoe, two decent players I guess, were in the way.

The best part of Bart is how sadly predicable he is. I’m sure he’ll respond to this with a tweet about Bradygate, or something. Bart’s got an album of Barstool controversies in his phone that he just uses to tweet whenever we have the audacity to call him on his shit. That’s my favorite part of Bart, though. He holds every employee responsible for everything that’s ever happened at their place of work. Write for Barstool? He’ll yell “Bradygate!” Work for WEEI? “METCO bus racist comment!” It doesn’t matter if you were involved in the controversy, or even worked for the company at that time, it’s on your head. Unless you’re Bart Hubbuch and work for the New York Post, then you’re free. All the sexist, generally despicable, or racist headlines and cartoons the Post has published, like the one where they call Obama a monkey 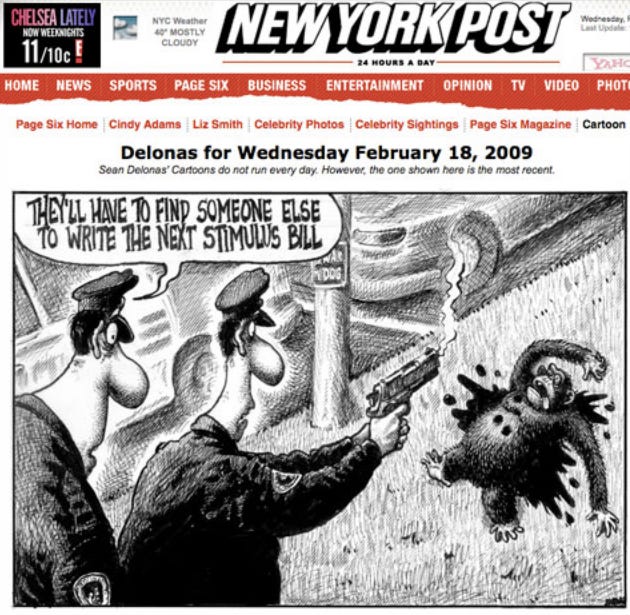 have absolutely nothing to do with him. He’s clean. Bart is just a good guy who fights for what’s right and doesn’t at all have an agenda.

I’m not even sure I’m going to post this.  That’s how much I hate myself for giving this pathetic troll the attention he so desperately craves.

PS – Bart’s not a racist though, even though he said he was waiting for an “English translation” of a Marshawn Lynch press conference. He didn’t delete it to cover his tracks, he deletes ALL his tweets. Just like Tom Brady destroys all his cell phones. 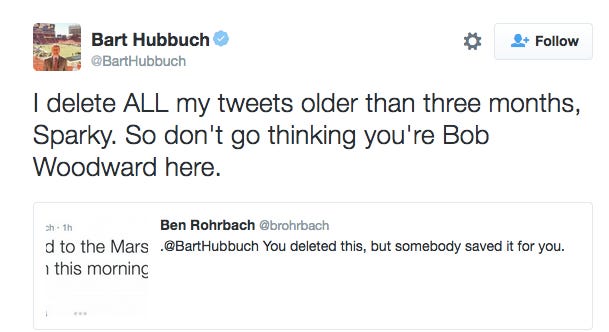