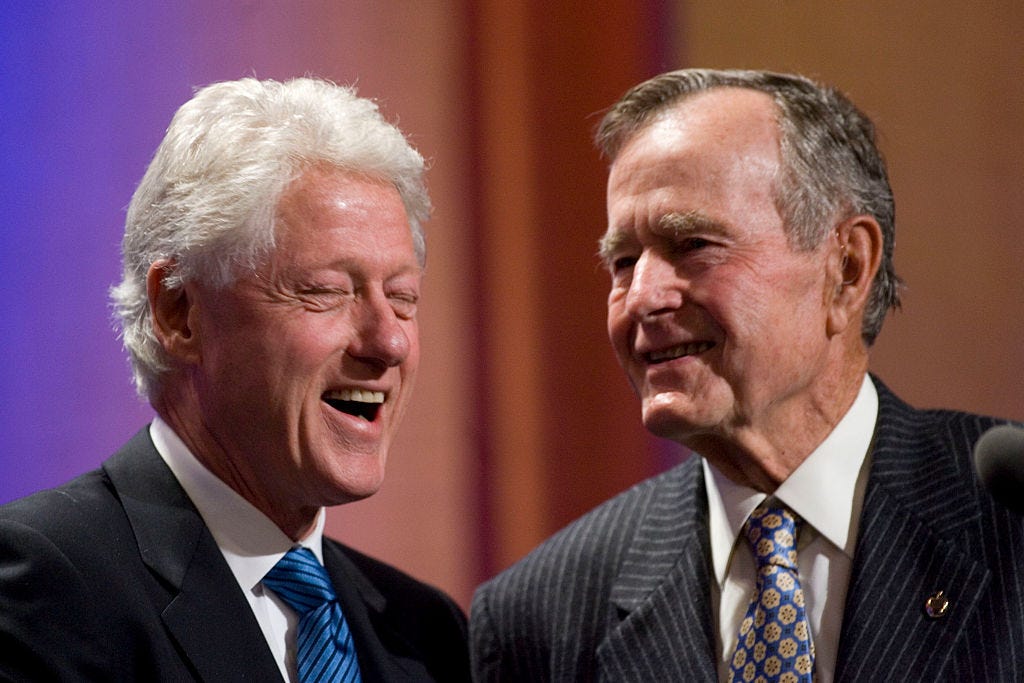 Politico — Former President George H.W. Bush is bucking his party’s presidential nominee and plans to vote for Hillary Clinton in November, according to a member of another famous political family, the Kennedys.

Bush, 92, had intended to stay silent on the White House race between Clinton and Donald Trump, a sign in and of itself of his distaste for the GOP nominee. But his preference for the wife of his own successor, President Bill Clinton, nonetheless became known to a wider audience thanks to Kathleen Hartington Kennedy Townsend, the former Maryland lieutenant governor and daughter of the late Robert F. Kennedy.

On Monday, Townsend posted a picture on her Facebook page shaking hands next to the former president and this caption: “The President told me he’s voting for Hillary!!” 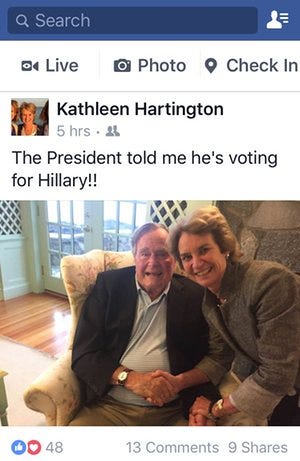 Asked about Townsend’s post, George H.W. Bush spokesman Jim McGrath in an email replied, “The vote President Bush will cast as a private citizen in some 50 days will be just that: a private vote cast in some 50 days. He is not commenting on the presidential race in the interim.”

It’s no secret that the Bushes are not happy about the 2016 presidential election cycle. Jeb Bush had been rumored to be next in line for GOP presidents as far back as 2008. The family was just biding their time. Assessing the landscape. Deciding when precisely to go for it. With Obama’s approval numbers down a few years ago and Hillary the presumptive DNC nominee basically since Barry took office, the stage was set for a classic Bush v Clinton race for the White House.

Then Donald Trump popped up, shit on Jeb for 6 months straight, and made him unceremoniously disappear. Made him have to do a self-deprecating Emmys appearance to repair his national image. Here are some of the things Trump said about Jeb:

– “He’s a total stiff, Jeb Bush. Here’s a guy, honestly, if he weren’t in government, you wouldn’t hire him to do anything, okay? If you had a company you wouldn’t even hire him.”

– At a New Hampshire town hall in February, Trump called Jeb a “lightweight,” “not a smart man,” “stiff,” and a “spoiled child.”

– “I like some of them,” Trump said of GOP opponents before turning to Bush. “I don’t have a lot of respect for Jeb. Jeb’s a lightweight.”

So do I believe Bush 41 is voting for Hillary? Yes. Absolutely. As much as these people have always been in opposition to the Clinton Machine, they’re the same thing just on the other side of the aisle. Slick Willy and Dubya have been charity partners for years. They’re boys.

Although no, it’s not a shocking move after the way Trump v Jeb played out, it’s still incredibly rare. I’m a ‘uge history and politics buff and I cannot remember the last time a former president voted for the presidential nominee of the opposition party. Just speaks to the normalcy and consistency and predictability of this election. A former president is generally one of the most powerful and influential members of the party, brought in to campaign in key swing states, give convention speeches and draw a linear connection between himself and the party’s natural successor. The Bush family has 2 living former presidents — not only is neither towing the line for Trump, but at least one is voting for Hillary. Interesting.