In a public Facebook post, color guard member Sophie Randleman, a junior at ASU, said one of her fellow students was “shoved by several very large, intentionally aggressive, football players.” Randleman said the color guard member “had severe pain and had to sit for most of the game.”

Randleman said she later learned that “several other members were groped, sworn at, taunted and touched in ways that were definitely not asked for.”

From its seat in the press box on Saturday, The Post recorded both teams’ entrances. The Appalachian State color guard stands in front of the far sideline, waving flags. From this video — shot high above the field, with a mobile phone — it is difficult to tell if anyone was assaulted. It is also, obviously, impossible to determine intent.

While Randleman’s comments should be concerning to UM, it is not typical for a color guard to be standing in the path of a team running into the field. Visiting teams don’t usually have to dodge students.

Today was a weird day. Appalachian played University of Miami in Boone this afternoon, and unfortunately it was a loss for the Mountaineers.

I want to start out by saying that I know that Color Guard isn’t viewed highly of by the common individual, let alone most individuals. It’s a thing that I enjoy doing, and I’ve grown a thick skin in regards to how it’s viewed. I’ve learned not to care; however, I do care deeply about my fellow color guard section members, and will not tolerate being outwardly disrespected.

For the end of our marching band’s pregame show today, the color guard was lined up in groups on the back sideline as well as 8 steps in front of the back sideline. Typically, the opposing football team will make an effort to run around us as we spin to our fight song, apologizing if they get in our way or make an effort to avoid us completely. Today, Miami’s football team decided to blind side one of our members on the corner of the field. She was shoved by several very large, intentionally aggressive, football players. No apologies were made regarding this incident, and the member who was hit had severe pain and had to sit for most of the game. I turned around just as this was happening, and was immediately furious and upset. Leaving the field, I thought that this was the only incident that occurred. It turns out that several other members were groped, sworn at, taunted, and touched in ways that were definitely not asked for.

I was told repeatedly today that Miami’s team is notoriously scum, but that is no reason to sit back and let this happen. I can’t even imagine how many other events similar to this one have occurred. I know the likelihood of this event gaining attention is very slim, because at the end of the day, we’re “just the color guard”. I want to call attention to the fact that this is unacceptable, but ultimately I’m unsure of the next steps to take. It’s worth trying.

On a more positive note, I was on ESPN today because I decided to walk behind an interview and make a weird face.
Don’t stand for something just because you think you don’t have power over the situation, have a nice night.

Listen let me say this first loud and clear, bumping and hitting and assaulting any sort of band member or Color Guard is way out of line and not what college football is all about. Harassing and cat calling and groping female members of either is especially bad. Under no circumstances should that ever be tolerated and anybody who does it should be punished.

In other news I have completely solved the problem.

When an entire team of gigantic D1 football players hopped up on adrenaline and testosterone are running out of a tunnel prepared to bash skulls with other 250 pound men for 60 minutes, going in this direction: 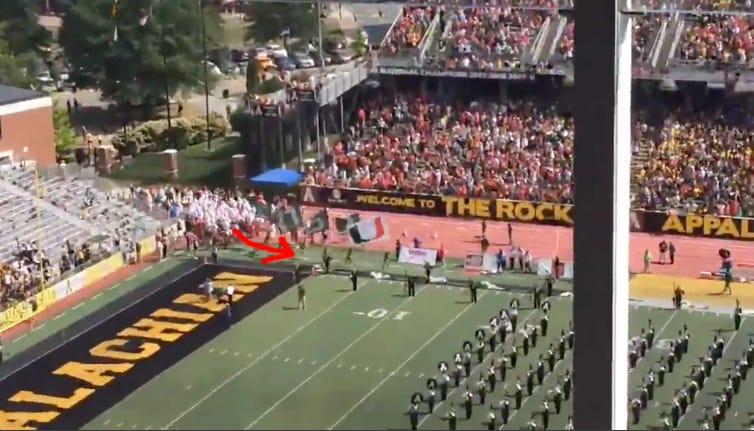 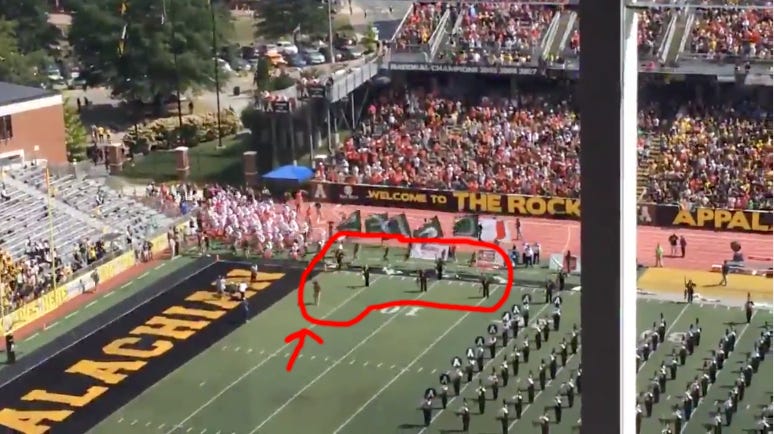 Because as you can see from the following diagram (Fig. 3), your paths will intersect, and you’ll make it hard for that mass of 105 players to run to their bench: 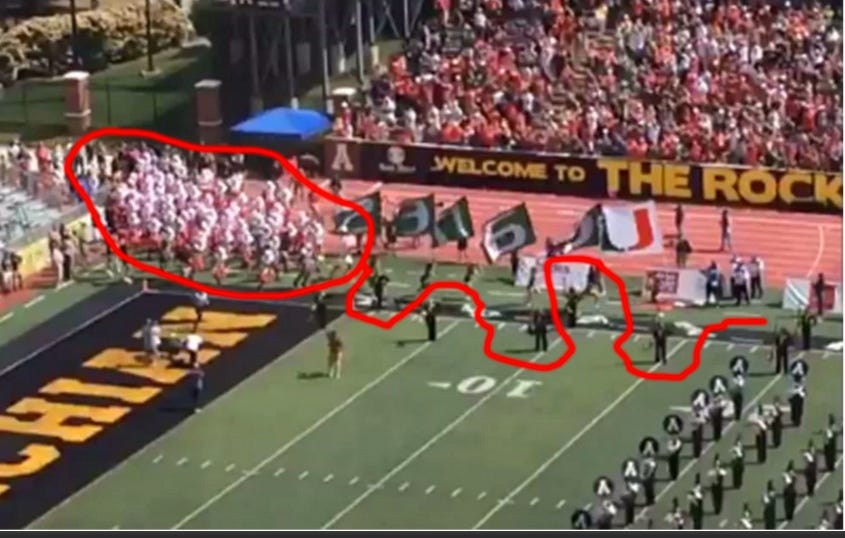 Now as I understand, in the past opposing teams would politely tiptoe around you standing directly and I mean directly in their path. And if they stepped on your toe or brushed your shoulder they would immediately apologize and send an Edible Arrangement to your dorm room. It seems like Miami wasn’t quite as well-mannered, but then again, what can you expect from the U?

But if you were actually sexually harassed and battered and bruised by these thug Miami players somewhere that the cameras didn’t seem to pick up then I’d get the cops involved for sure.