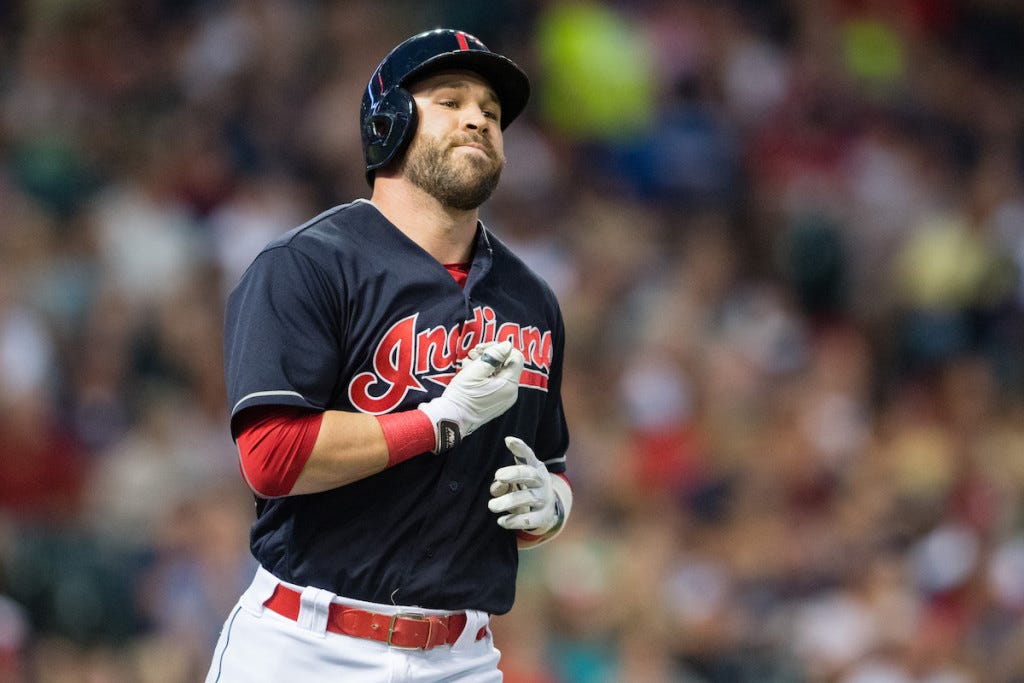 I feel bad for the Indians. If you’ve been following my coverage of this team all year, I’ve been talking about how overlooked they are, how fun they are to watch, how something special is happening in Cleveland this year with their 10 walk-off wins, and how their league-leading rotation was going to take them deep into October. Welp. Not anymore.

The Tribe’s three-headed monster of Corey Kluber, Carlos Carrasco and Danny Salazar is now just Kluber, who is certainly still a monster and a big time candidate for Cy Young, but it’s going to be next to impossible to carry an entire team to a championship by himself. Earlier this month, Salazar suffered a forearm injury, and hasn’t taken the mound since, and Carrasco broke a bone in his pitching hand on Saturday, which resulted in Indians manager Terry Francona saying that his season is over. That’s a major, major blow, and it’s no surprise that most feel like the loss of these two starters means the end of the World Series chances in Cleveland this year.

Paul Hoynes, who has been covering the Indians since 1983, had some thoughts about Cleveland’s recent chain of unfortunate events.

The Indians won a ballgame Saturday afternoon, but their postseason dreams ended. Write it down. On Sept. 17, the Indians were eliminated from serious postseason advancement before they even got there. They have 14 regular season games left and they’ll eventually clinch their first AL Central title in nine years. But that’s where it ends, because no team can withstand the losses the Indians have suffered over the last nine days.

Harsh. But I mean, is he wrong? Of course he’s not wrong. If Salazar and Carrasco are out, your postseason rotation now becomes something like Corey Kluber, Trevor Bauer and Josh Tomlin in a five-game series. As I mentioned earlier, Kluber has been awesome all year, and both Bauer and Tomlin have had decent stretches of solid pitching performances, but since July 2, Bauer and Tomlin have thrown 139 innings with a combined 6.35 ERA and a 1.50 WHIP. That’s terrible. And those are the guys that you are now depending on in place of Salazar and Carrasco, yet some Indians players are upset with Hoynes’ column saying that their chances in the postseason are slim to none. Surprise! One of them is Trevor Bauer himself. 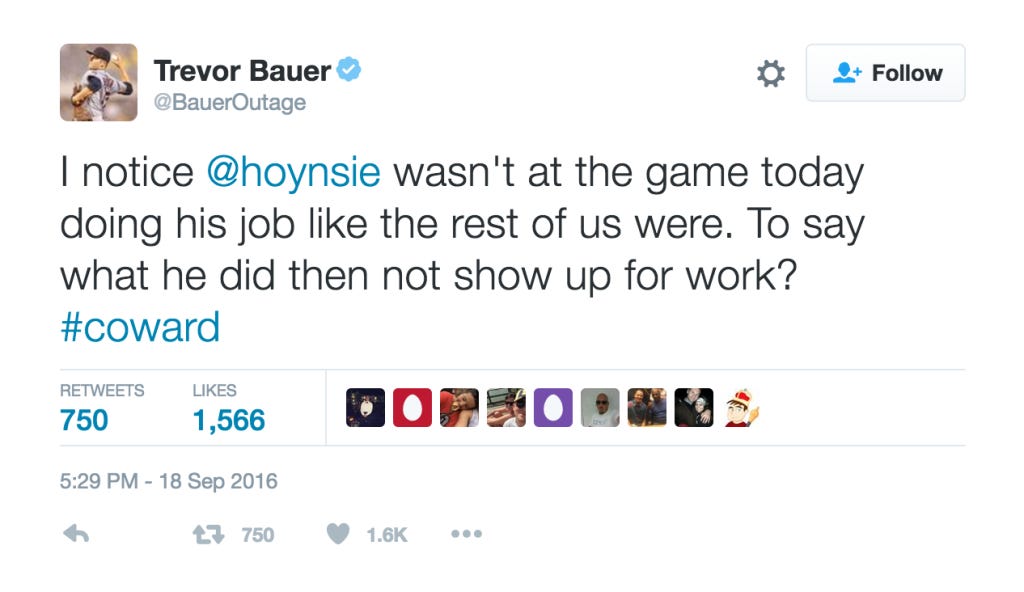 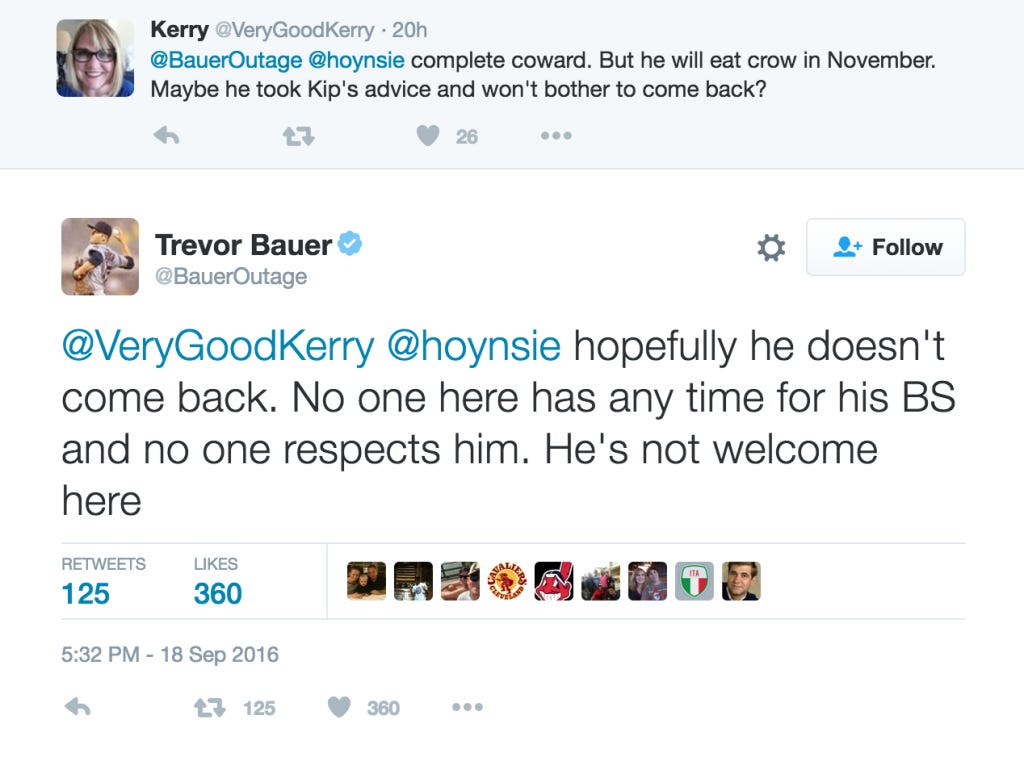 Just a little context here — Bauer’s a certified lunatic. Throwback to my favorite blog that I’ve ever written at Barstool, the story about how Bauer wanted the person who called the cops on him for flying his drone to live a short and miserable life. So, if these tweets came from anybody else, I’d probably tell them to relax, and that beat writers aren’t baseball players, how they don’t need to be there everyday, and how it’s completely normal for them to get days off during the week. However, since it’s Bauer, I’ve just gotta take a step back and enjoy the show while the Indians still allow him to tweet. Jason Kipnis had a great response, though. 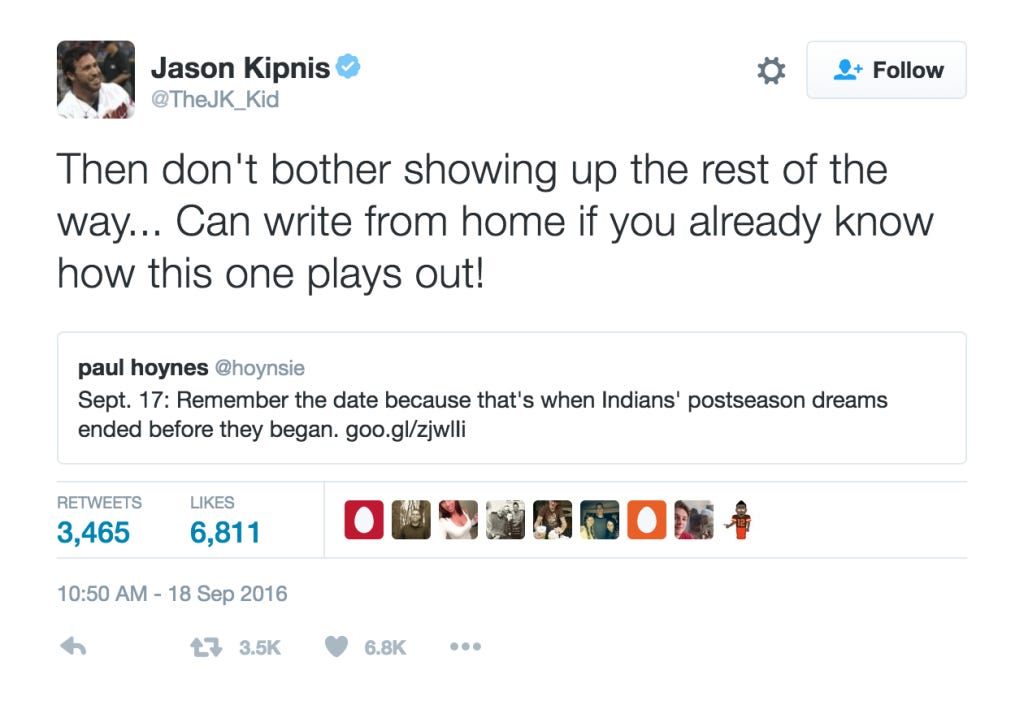 Good for Kipnis. Obviously I’m on the logical side of thinking that the Indians are fucked without Carrasco and Salazar, but anyone who has a problem with Kipnis saying something like this is a stiff. What do you expect the guy to say? You want him to retweet the story and say, “Yup! We’re fucked! Maybe next year!” I’m sure the players’ response is a mix of taking offense to the notion that they have no shot, mixed with their frustrations of losing those two guys in the first place.

If you’re a guy in that clubhouse, you’ve gotta know that losing those two guys is a HUGE hit on your chances come October. If they band together because of everybody writing them off, then great. They’ve got one hell of a manager who’s had his back against the wall and the deck stacked against him in the postseason before, but he also had one of the best teams ever to bail him out of that. This Indians team without Salazar and Carrasco is far from that.