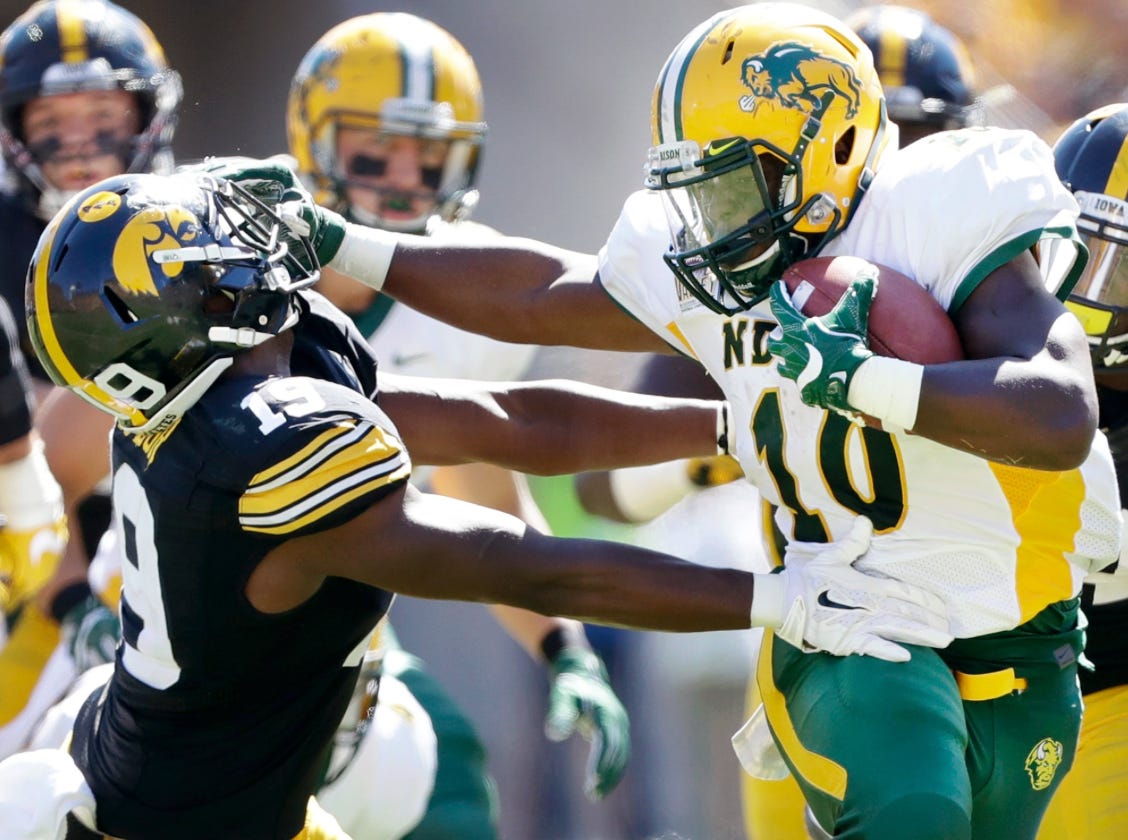 The hits just keep coming. Not all that surprising though. As soon as that last-second kick sailed through the uprights I knew it was the worst possible news for the highly-ranked Iowa Hawkeyes. It doesn’t even matter that North Dakota State is the best FCS team in the land and has won a zillion championships in a row (literally a zillion). The narrative coming outta the NDSU/Iowa game on Saturday was gonna be, “Oh shit! The team that went undefeated last year got beat at home by an FCS school!” And that’s what it is. That narrative is totally fine and pretty accurate and Iowa deserves all of the shit that is currently cascading upon us now. This Iowa team (and especially last year’s Iowa team) were called frauds from the jump. Everybody waiting for the other shoe to drop. Last season it took until the B1G Championship game for that other shoe to drop. Then that shoe plummeted 40 floors and onto the street below during the Rose Bowl against Stanford.

This year it didn’t take nearly as long. Week 3 against a rabid NDSU Bison squad at Kinnick Stadium in Iowa City. Iowa’s bread and butter this season has been the two-headed monster of LeShun Daniels and Akrum Wadley. Those two rushed for 204 yards Week 1 and 161 yards Week 2. Last Saturday? 49 yards. Total. Iowa’s run blocking wasn’t nearly as sharp and that was a big reason why they lost. Also, and this dawned on me Saturday as I watched our run game struggle, the Hawks don’t really have great wide receivers, if any. There’s Matt VandeBerg who is good and CJ Beathard’s favorite target. Then there’s Riley McCarron and then there’s………..I don’t know who. TE George Kittle is good too but we don’t have any big time playmakers. Combine that with a sputtering run game and that’s how you lose to an FCS team at home. Iowa has some injured offensive linemen so there’s a chance it gets turned around soon. Hopefully.

Oh and I’d be remiss if I didn’t mention Kirk Ferent shitting his pants down the stretch. Act scared down the stretch with play calling and that translates to your players getting skittish. Those two run plays on Iowa’s final offensive possession caused every longtime Iowa fan to puke on their shoes. We’ve seen that nightmare scenario play out seemingly hundreds of times. Get the ball back up less than a field goal, call two plays where our running back runs into the back of our linemen and falls down, finally call a pass play on 3rd and long, get sacked. Nightmare shit. Like I said immediately after, 2015 Kasino Kirk at least runs capable plays there. Maybe even calls a play action and tosses it over NDSU’s head. He goes for the kill. New Contract With A Huge Buyout Kirk apparently plays to lose which is exactly what happened.

– Josey Jewell is a monster on defense