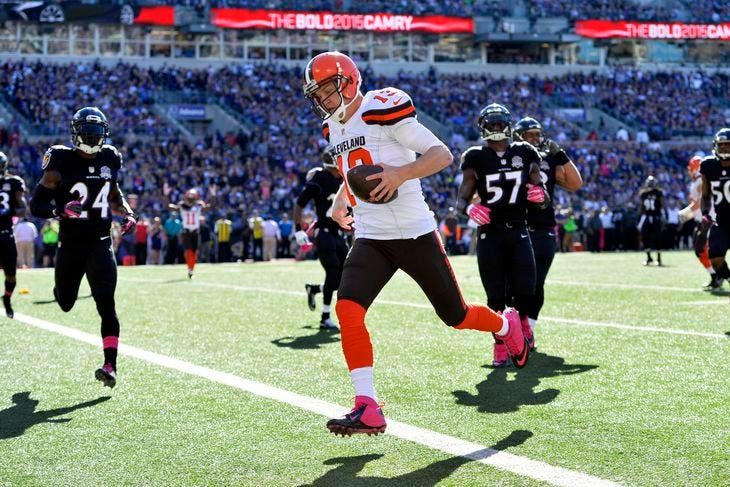 Last week the Ravens rode a mixed performance to a 13-7 win over an (increasingly) abysmal Bills team. It didn’t necessarily leave a great taste in my mouth, but it was a step in the right direction considering they failed to close out so many games last year. I took solace in the fact that the next week’s opponent had pretty much gotten their doors blown off by an FCS quarterback making his first career start. On top of that, RGIII was under center and looked like his same terrible self that couldn’t hold down a job in DC. The Ravens could literally CTRL-C —> CTRL-V their gameplan against Tyrod Taylor and find themselves at 2-0.

And then RGIII things happened. As Tuesday went on, news trickled out that RGIII had hurt himself, and maybe more seriously than originally thought. Sure enough, the Browns put Bob on the IR and that left us with our worst nightmare…. Josh McCown. For those Ravens fans who have effectively blocked 2015 out of their brains (trust me, I’ve tried), let me refresh you. This is the guy, a career journeyman, who threw for 669 yards and 3 TD’s in two games against the Ravens. He OWNS the Ravens.

Those two games basically came down to 2 fluke plays. A touchdown that Gary Barnidge caught with his goddamn legs, and a blocked FG return by Will Hill on the final play of MNF. Those are the exact kind of games this football team needs to avoid, especially against lowly teams like the Browns. The last thing I wanted to see was a QB who has a tendency to drag us into those games. Going a step further, McCown even dragged us into one of those back in 2013 while with the Bears, beating the Ravens 23-20 with another mistake-free performance. So yeah, Josh McCown is the kinda guy who is gonna make us pull our hair out on Sunday.

Where does our hope lie? The hope is that this Ravens secondary has changed for the better. Eric Weddle was very impressive last week and has changed the entire complexion of the secondary. Splash plays murdered the Ravens in games the past few years, and they did a great job of bottling up Tyrod last week. Plus the defense may not have been as bad last year as it appeared. Take a look at this:

Not so bad now huh?

I hope things are different, I really do. I also hope the offense can piece together a few more drives and finish them off in the end zone Sunday. It was clear what kind of potential the O has with all of the targets Joe has to work with, but we can’t lose sight of the run. Trestman has shown impatience with it, and Cleveland gave up over 2,000 yards on the ground last year. Pound the rock, and then take em down over the top to Mike Wallace or Perriman for a big score. That’s the formula for a rout on Sunday. We’ll see if Josh McCown can spoil that yet again.