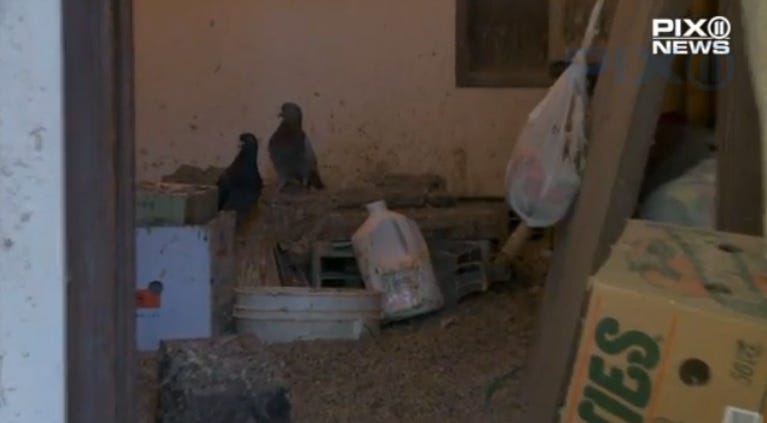 PIX- Hundreds of pigeons were rescued Thursday from a Long Island home, the doors of which could barely open because of how much bird droppings were on the floor, authorities said. “Every time we go somewhere, we think we’ve seen it all. This is horrendous,” said Gary Rogers, spokesman for the Nassau County SPCA. “You can’t even walk around the house. You can’t open the doors because of all the pilings of bird droppings.”

It’s unclear what prompted officials to respond to the home at 2071 Abbot Ave. in Merrick, but when they arrived, they found some 350 free-flying pigeons inside, including newly hatched birds. More than 2 feet of bird droppings and seeds covered the floors, Rogers said.

The man who lived at the home was carried away in a stretcher, his body and head covered in sheets exposing only his face. An oxygen mask covered his mouth. He was taken to a hospital in unknown condition, Rogers said. The reason he was brought to the hospital was not revealed. Animal control officials are now tasked with capturing each bird, all of which were loose in the house. Rodgers said they’ll likely “be there for a couple hours.”

First of all, congratulations to any reader that made it through that story without gagging at least once. You are a stronger person than I. It was bad enough just reading about a ton of those flying rats living together in a house, but the fact you can’t open the door because the bird shit was so high may make me throw up. Like I legitimately gagged just typing that sentence. Whoever owned those pigeons had to have a screw loose, right? The most famous pigeon guy of all-time is Mike Tyson for Christ sake. The police should definitely visit the tenant of this house before letting him back into the wild, because I think a house full of 350 or so pigeons is the definition of precrime.

But when he gets out, I don’t know where he will live. Because that house needs to be destroyed right now. They don’t even need to get all the pigeons out. Those things seem to be indestructible anyway. Just bulldoze that residence to the ground like Forrest Gump did to Jenny’s childhood home and be done with it. I would rather live in a house that I knew someone was murdered in than a house where all those pigeons lived. Because not only do you have pigeons doing pigeon things like shitting and being disease-ridden vermin in there. But you have pigeons dying, pigeons fucking, and pigeons birthing other pigeons. Dissssgusting. Plus there are some smells that cannot leave a place. I would imagine an old pet store has to be aired out for at least 2 months before a new tenant can move in. When a New York animal control spokesman says “We think we’ve seen it all, this is horrendous”, you know shit is bad. I have no problem working in a circus of an office with my chief of content making fun of me for being fat. But if the Milk Boyz start buying animals like ferrets and turn the office into their personal pet store, I think I am out.