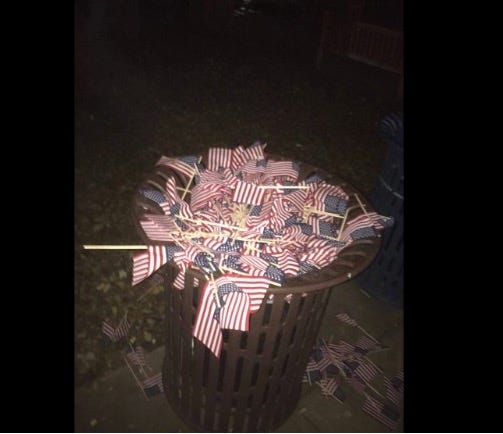 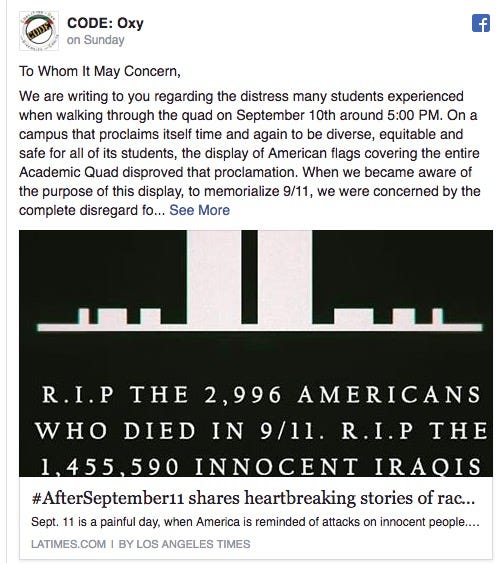 (CNN)- Occidental College is investigating the vandalism of a 9/11 memorial on campus after the US flags used in the display were tossed in the trash.

What a surprise, Young Republicans stirring up trouble on campus. Let me guess, they brought a big cutout of Trump and started chanting BUILD A WALL in front of all the Mexican students or something. Always looking to stir up trouble in the name of “free speech.” Can’t even imagine what they did to be this offensive on 9/11…

The Occidental College Republican Club said it had planted 2,997 tiny flags — one for each of the victims of the September 11, 2001, attacks — on the quad of the Los Angeles liberal arts college of 2,100 students.

“Vandals crushed, snapped and threw in the garbage every single flag,” the college GOP club said on Facebook. “Not one was left in the ground.”

Wow. It’s even worse than I thought. 2,997 flags…honoring each of the lives lost in the worst terrorist attack on American soil? Who approved this???

And it gets worse…

The temporary display consisted of a sign saying, “9/11 Never Forget Project,” along with an “R.I.P.” message to those killed in the attack. Small US flags also lined the sidewalk.

Jesus, if I was there I would have torn each and every flag out myself, with my own hands. Just a disgusting display of an exclusionary and nationalistic narrative. Incredible, not to mention extremely inflammatory for these punks to try and memorialize innocent people who tragically died. Makes me sick to my stomach thinking of all the people who had to sit by and watch American lives honored.

Thank God the Coalition @ Oxy was there to clean up the mess.

CODE: Oxy
September 11 at 4:25pm ·
To Whom It May Concern,
We are writing to you regarding the distress many students experienced when walking through the quad on September 10th around 5:00 PM. On a campus that proclaims itself time and again to be diverse, equitable and safe for all of its students, the display of American flags covering the entire Academic Quad disproved that proclamation. When we became aware of the purpose of this display, to memorialize 9/11, we were concerned by the complete disregard for the various peoples affected by this history.
As students of color, this symbol of the American flag is particularly triggering for many different reasons. For us, this flag is a symbol of institutionalized violence (genocide, rape, slavery, colonialism, etc.) against people of color, domestically as well as globally. Additionally, if the goal of the memorial is to commemorate the lives lost during 9/11, the singular nature of the American flag fails to account for the diversity of lives lost on that day.
Historically, the American flag and subsequent American nationalist symbols, have been polarizing and marginalizing to people of color living within the United States. This has been most recently exemplified in Colin Kaepernick’s protest of the American national anthem.
When this institution allows thousands of American flags to be placed in the center of campus it speaks volumes to the students that have lived their lives under the oppression of this flag. From Native students whose land was stolen to undocumented students who live in fear of deportation to Black students who see their communities destroyed by state sanctioned murder, this school is saying your fear and trauma do not matter here.
In addition, many students were confused and inquiring about what the purpose of the flags in the Academic quad was. This indicated to us that the message of “commemoration” was lost and absent in the use of the flags. This is not to say that the American flag is inherently comparable to the violence that has occurred under its silhouette, but to state that it is an ineffective memorial for what has happened to the people of the world in the past fifteen years. This is not a critique of desiring to remember the fallen, this is a critique of failing to comprehend who, or what, has been lost. To this end, we wanted to provide more information and more context in order to center the actual lives and individuals affected by 9/11 rather than a simply placing a symbol of one nation.
In an effort to broaden the memorial, signs and a poem (attached below) were posted throughout the quad to more deeply remember the events that occurred on 9/11 as well as the lives that were lost within and outside of the United states as a result of those attacks. The main sign reads, “R.I.P the 2,996 Americans who died in 9/11. R.I.P the 1,455,590 innocent Iraqis who died during the U.S. invasion for something they didn’t do.” This sign puts into context that more than just Americans died on September 11th. Additionally, we placed tweets from these articles,

to highlight the experiences of Muslim Americans whose lives have been severely changed for the worst in the aftermath of 9/11. It is extremely important to note that Eid al-Adha begins on September 11 this year. By placing these flags on this day shows a complete lack of thought, care or understanding of the students that are still living with the rising Islamophobia in the aftermath of 9/11.
We sign this in solidarity with each student on this campus, each member of the United States community and those in the global community that have experienced oppression under the guise of American patriotism.

Preach! Fuck America! (They chanted from their private liberal arts college in Los Angeles with a $406 million endowment).

And I understand that the school and the police have a job to do, and they have to investigate, but isn’t following the legal process nationalistically American too? Can we just skip it and arrest these kids immediately? Because they’re not going to stop, and they’re flaunting it in all our faces.

“This is beyond politics, this is about those lives that were so tragically taken,” the college’s Republican club posted.

“Of course, we put them back in the ground,” the club said of the flags. “If you try to destroy it, we will rebuild it.”

Seriously, get them off the streets.

And while we’re at it, get this thing off the streets too (caution, trigger warning):