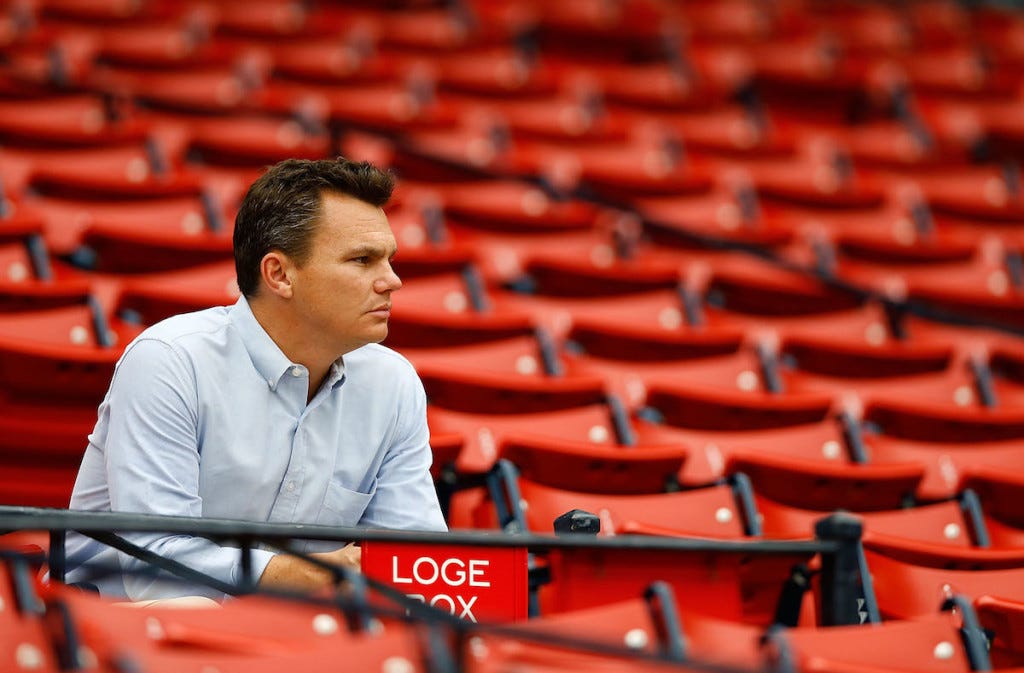 I don’t blame Cherington for declining that position with Boston. By accepting that position, he would’ve essentially been accepting and agreeing to a demotion, and I don’t think he actually deserved a lesser role within the organization that he had been with since 1999. On the surface, the Cherington Era as general manager will be looked at as a failure. In year one, you had the 2012 Red Sox, who were an embarrassment to the franchise, and Bobby Valentine will go down as one of the worst hirings in team history. A World Series title was sandwiched in between a last place season in 2012, and two more last place seasons in 2014 and 2015.

Which decisions sank Boston to the bottom of the division in those years? The Bobby Valentine hiring, AJ Pierzynski signing, Grady Sizemore signing, trading Jon Lester, not re-signing Jon Lester, signing Stephen Drew for the second time and moving Xander Bogaerts to third base, trading John Lackey for Allen Craig and Joe Kelly, signing Justin Masterson, not re-signing Andrew Miller, signing Rusney Castillo, and signing Pablo Sandoval. Off the top of my head, those are the biggest organizational blunders during the Cherington Era, but the biggest ones — the Valentine hiring, not re-signing Lester, and the Sandoval signing — I’m not even sure you can blame Cherington for those.

The Valentine hiring was undoubtedly an ownership call. Botching the Lester negotiations was, again, the fault of Larry Lucchino and Red Sox ownership, and in the case of Sandoval, when you’re talking about investments of upwards of $100 million, that’s an ownership call. Ownership knew that the team was coming off two last place seasons in three years, and they wanted a “name” and a guy that they could market, so they signed the big fat Panda. There’s no way that Cherington would’ve made the baseball decision to make that kind of investment in a player like Sandoval.

But here in Boston, we dwell on the negative, so Cherington’s legacy will unfortunately have a negative connotation to it, mostly because of the three last place finishes in four years, even though the one lone year not spent in the basement ended with a World Series parade. It’s time to give Benny boy the credit that he deserves, because I truly believe that he was given a raw deal here in Boston.

First and foremost, he got a ton of shit for decisions that he made that didn’t work out right away, but have since panned out. Cherington was crucified for the Rick Porcello extension of four years and $82.5 million before he even threw a pitch in a major league game for the Red Sox, but here we are a year later, and Porcello is 20-3 with a 3.21 ERA in contention for a Cy Young award. He also signed Hanley Ramirez, which he’s on the record as saying that that was his decision, and he got killed for that one, too, because Hanley ended up being one of the worst left fielders in baseball history.

Well, turns out he’s a pretty damn good first baseman, but Cherington never got to hang around to see that come to fruition. Speaking of Hanley — people forget this — but when Theo Epstein left the team for a brief period of time during the 2005-2006 offseason, Cherington and Jed Hoyer were named co-general managers of the Red Sox, and that’s when Hanley was traded to the Florida Marlins for Josh Beckett and Mike Lowell. That was Cherington and Hoyer, not Theo.

Cherington got shit for signing the biggest dud to ever come out of Cuba in Rusney Castillo, but how soon we forget that he was the one who signed Yoan Moncada, who just yesterday was named Baseball America’s Minor League Player of the Year for 2016, and was ranked as the No. 1 prospect in the MLB by MLB.com prior to being called up this month. Jumping around a little bit here, but let’s rewind back to 2012 for a second.

We all know where this is going — Cherington pulled off one of the biggest blockbuster trades in history when he sent Carl Crawford, Adrian Gonzalez, Josh Beckett and Nick Punto to the Dodgers in the biggest salary dump of all-time, allowing the Red Sox to hit the reset button, setting the stage for the 2013 World Series championship. You know what else he did in 2012? He traded Lars Anderson to the Cleveland Indians for a knuckleballer by the name of Steven Wright, who was an All Star this year and had the lowest ERA in the American League at the All Star break.

Then, in 2013, he signed free agents Mike Napoli (who he later extended), Shane Victorino, Koji Uehara, David Ross, Stephen Drew (the first time), Jonny Gomes, Mike Carp, and made trades for Jake Peavy and Joel Hanrahan — but the real value in that Hanrahan trade was getting Brock Holt, an All Star in 2015. Speaking of trades, in 2014, Cherington traded two months of Andrew Miller for six years of Eduardo Rodriguez, and he traded two months of Jon Lester for a year and two months of Yoenis Cespedes, which he then traded for five years of Rick Porcello.

Jake Peavy was also part of the 2014 fire sale, which Cherington turned into Heath Hembree. In 2015, Cherington took pieces from the 2012 blockbuster deal with the Dodgers, and turned that into Wade Miley, who Dave Dombrowski then turned into Carson Smith. Cherington also acquired a valuable bullpen piece in Robbie Ross Jr. for Anthony Ranaudo, who has a 10.13 ERA between the Texas Rangers and Chicago White Sox this year. Not that he’s a huge contributor, but Cherington flipped Will Middlebrooks for Ryan Hanigan. Addition by subtraction, I guess.

Cherington also comes from a scouting and player development background, which is what he’s going to bring to the table in Toronto, and it should be noted that he drafted a handful of Boston’s top prospects, such as Andrew Benintendi, Michael Kopech, Sam Travis, Brian Johnson, Mauricio Dubon, and Michael Chavis, as well as signing Rafael Devers, Luis Alexander Basabe, and the aforementioned Moncada as international free agents.

And he should also be commended for the moves he DIDN’T make, as well. When teams were pounding on Boston’s door for Mookie Betts two years ago, Cherington didn’t budge, despite the Red Sox’s desperate need for starting pitching. Fast forward to today, and Betts is more than likely the favorite to win the American League MVP award at the age of 23.

See? It wasn’t all bad during the Cherington Era. It certainly feels that way with three last place finishes in four years, but the true impact of a general manager can’t truly be recognized or appreciated in such a short window of time. Look at this 2016 Red Sox team. Theo Epstein has been in Chicago for half a decade, and yet his fingerprints are all over this 2016 roster — David Ortiz, Dustin Pedroia, Clay Buchholz, Mookie Betts, Xander Bogaerts, Jackie Bradley Jr., Travis Shaw, Matt Barnes, Christian Vazquez, Blake Swihart, Noe Ramirez, and Junichi Tazawa — all Theo guys.

Dave Dombrowski is steering the ship now, but the core of Boston’s elite young talent has all been put in place by Cherington and Epstein before him, and it could be years before we see just what kind of impact Cherington actually had on the Red Sox franchise as a general manager. Unfortunately, I don’t think he’ll ever get the credit that he rightfully deserves.