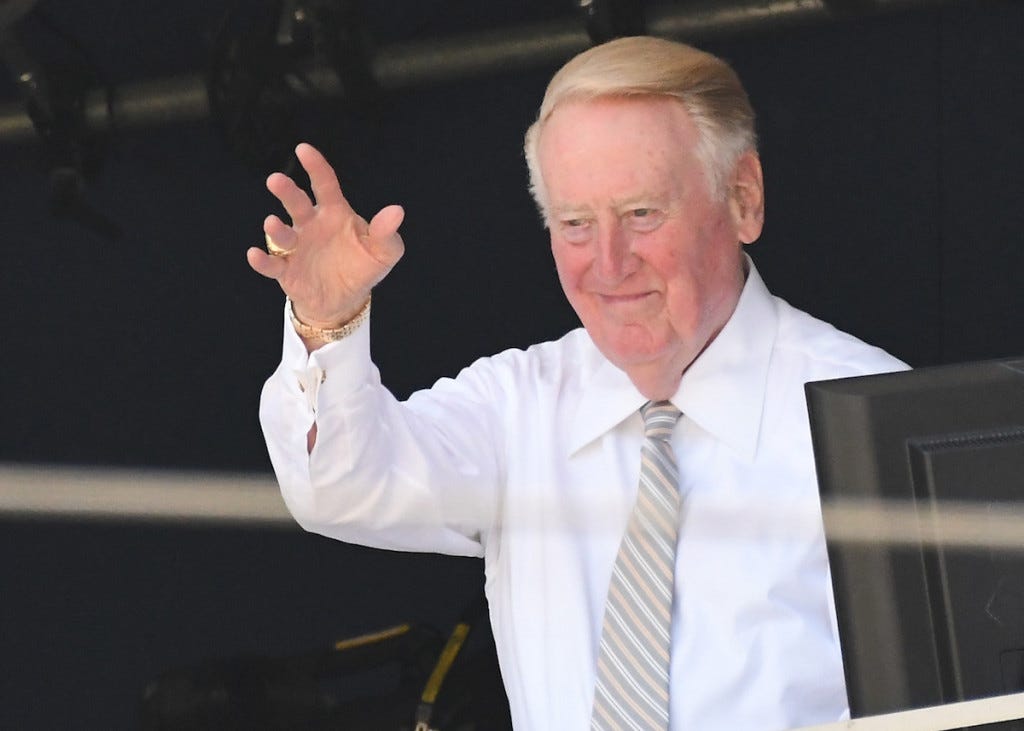 Eighteen games. That’s all you’ve got left with legendary broadcaster Vin Scully behind the mic.

We knew coming into this season that 2016 would be Scully’s final season as the Dodgers broadcaster, but it wasn’t until Tuesday that the 88-year-old announced that LA’s final regular season game on October 2 will be his last game as a broadcaster.

“I’m going to say goodbye at Dodger Stadium the last game with Colorado. I will say goodbye in San Francisco. And then that will be it. Otherwise, I’d be saying goodbye like in grand opera, where you say goodbye 12 different times,” Scully told The Times.

Hey, good for Vin for wanting to ride off into the sunset at the end of the regular season, and not make the Dodgers’ pursuit of a World Series title all about him. Not that he’d want that, but that’s what it’d inevitably be. Because he’s right — either way you look at it, if the Dodgers are playing an elimination game, the story shouldn’t be about whether or not it’s Vin Scully’s last game, it should be about the Dodgers surviving and moving on, or their season ending. And if they win the World Series, the story should be about the team winning the World Series, and just that.

You’ve gotta give him credit, because I’m sure most guys who have been in the business for as long as he has — 67 seasons as Dodgers broadcaster — they’d want a grand sendoff on the biggest stage. Nope, not Vin. He just wants to play out the string, and then fade into the shadows, as the Dodgers head off into the choppy waters of October.

Vin gave the aforementioned reason for why he’d be walking away on that date, which I’m sure carries more weight, but he also gave a second reason, which I’m sure helped justify his decision to walk away on October 2.

For Scully, 88, the most poetic sports broadcaster of all time, his career will have a poetic ending.

He grew up in New York. As he walked home from school one afternoon, at age 8, he passed a laundry that displayed the score of that day’s World Series game: New York Yankees 18, New York Giants 4.

“As a little kid, my first thought was, ‘Oh, those poor Giants,’“ Scully said. “From that little kernel, I developed a desire and a love for baseball. Since the Giants were 20 city blocks from my school and I could get there thanks to the Catholic Youth Organization and the Police Athletic League, I could go to games free, Monday through Friday. So I became a very big Giants fan.

“As things turn out, the last game of the season, and my last broadcast, will be against the Giants, in San Francisco, Oct. 2, 2016 — exactly 80 years to the day that I saw that Giant-Yankee scorecard.

“That is a fitting conclusion, I think, to my career.”

PS — How about your boy Feitelberg being the biggest Vin Scully hater in the game. The hell’s up with that?