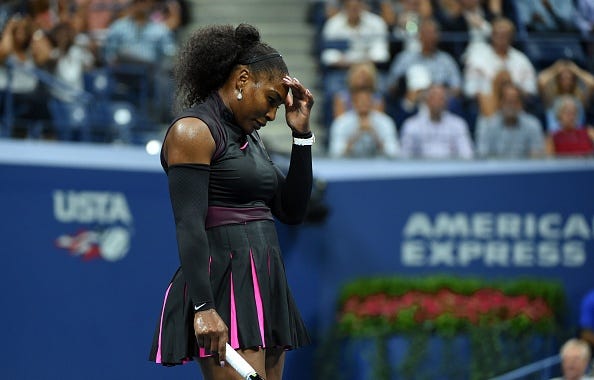 There was once a time when Serena Williams was the greatest women’s tennis player in the world. She has won 22 career grand slam events and nearly completed a grand slam in just 2015 alone. However, her only win this year has come at Wimbledon. And after losing in the 3rd round of the Olympics and in the semi-finals at the US Open, she has dropped out of the world’s #1 ranking and currently sits at #2. Could this be because she’s just getting older? Could this be because maybe she’s just losing a step or two? Or could this all be an intentional diversion to stray us away from thinking Serena Williams is taking all different sorts of steroids? Well it looks like it might be the latter.

The hackers published documents this week showing that Ms. Biles, who won four gold medals in gymnastics at the Rio Olympics last month, and the Williams sisters received medical exemptions to use banned drugs.

Now first off, as an American I would just like to say that these Russian hackers can frigg off straight to hell. Trying to besmirch the good clean name of American athletes like that? We’ll drop a bomb on their ass. But asshole Russians aside, the fact of the matter here is that Serena Williams is basically the Alex Rodriguez of tennis and is getting away with pumping her body content up to 75% banned substances. Which leads me to believe that she has been sucking ass at tennis on purpose to throw us off the trail.

It’s the perfect plan, really. You just suck so much that nobody could even possibly fathom the idea that you’re taking a shit ton of illegal drugs. Suck so much that people start to feel bad for you and start saying maybe you actually should start taking PEDs because you suck so bad. If Serena Williams was still winning tournament after tournament, it would be the biggest “no duh” of all-time that she’s actually the one getting all those steroids mailed to Peyton Manning’s wife. And I know what you’re thinking. Why would somebody use steroids only to not reap the benefits of them? Honestly… I haven’t thought that much into the conspiracy theory yet. But there’s gotta be a reason. There’s something fishy here and I’m gonna get to the bottom of it.