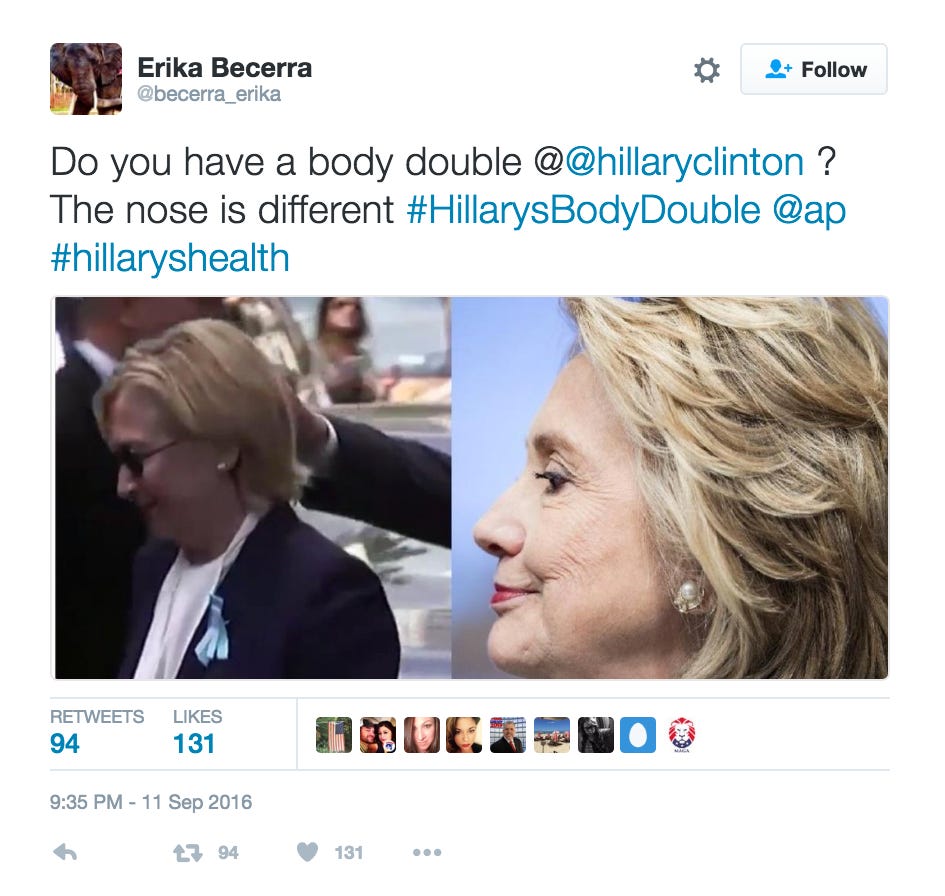 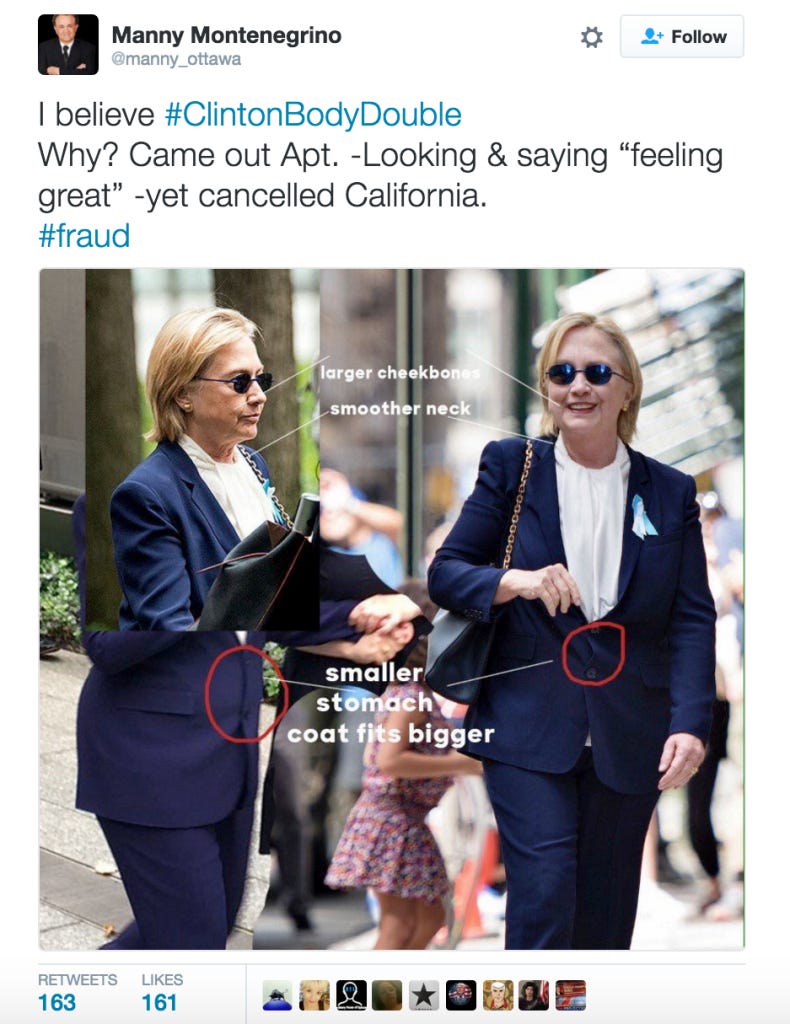 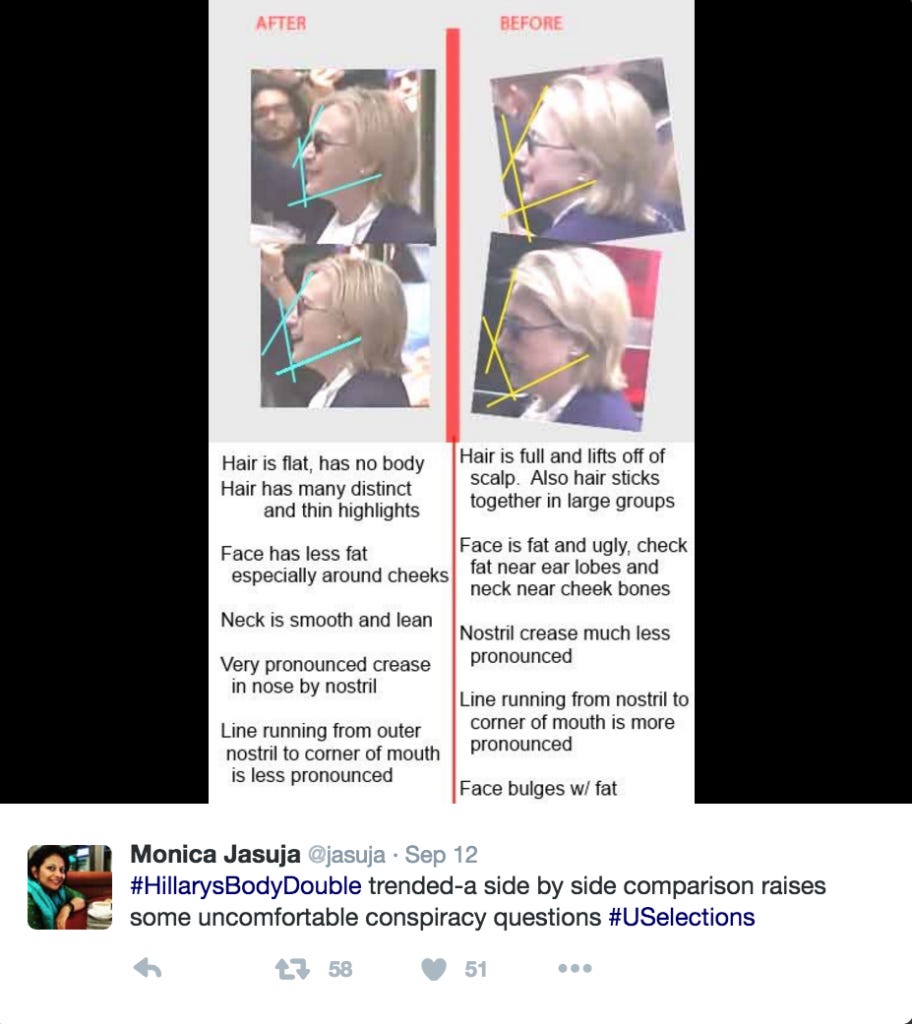 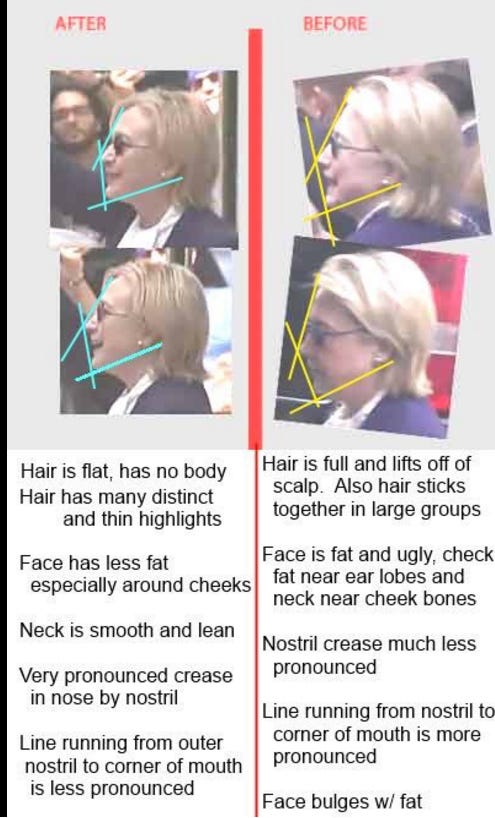 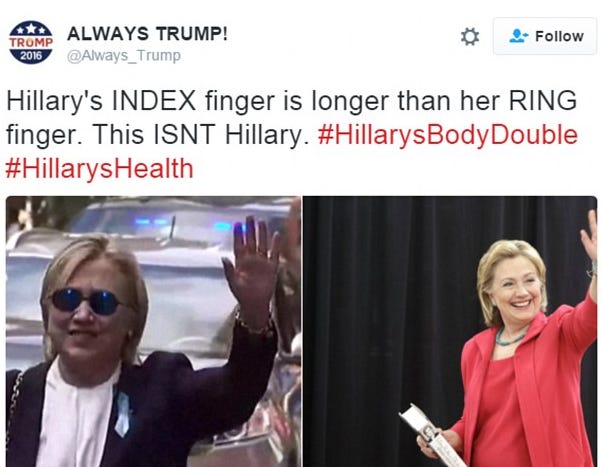 Daily Mail- Conspiracy theorists have claimed Hillary Clinton used a body double after she suffered a dizzy spell at the 9/11 memorial on Sunday. Social media users have begun sharing photo comparisons of the Democratic candidate to point out supposed ‘physical differences’ in the Clinton that was seen emerging from her daughter Chelsea Clinton’s house after the medical episode.

Video of Clinton collapsing as she climbed into a van after visiting the National September 11 Memorial & Museum in New York City sparked health concerns. The 68-year-old, who later announced she is suffering from pneumonia, insisted she did not faint but simply felt dizzy and stumbled. She said after sitting in the air conditioning and drinking a glass of water she ‘immediately’ began feeling better and felt well enough to take a detour to visit her daughter Chelsea and her grandchildren. However, critics say the woman who emerged from Chelsea’s apartment was a lookalike and not the real deal.

God I love this election! Conspiracy theories left and right. Entertainment value through the roof. Sure our country is probably fucked regardless of who wins, but that’s Future America’s problem.

As for today’s conspiracy du jour my response is the classic “No shit, Sherlock”. Has anyone ever seen the movie Dave? In my opinion, every President has at least one body double. Probably 3 or so. If a President dies in office, we can’t let our nation be run by a Vice President. It’s like having your team quarterbacked by someone that willingly would take a backup QB role. I want my President either in the White House or scratching, clawing, and politicking to get into 1600 Pennsylvania Ave. And can you imagine what Putin or China would be doing if we had a VP in charge? Dialing up jailhouse blitzes every time out. We just need someone that looks like the President to keep everyone in line while the people the really control the government get us by until the next election year. In the words of Prop Joe “Look the part, be the part, motherfucker.”

As I think this out, we have to be past the point of Dave technologically as a country, right? Why can’t these be Hillary look-alikes be clones like in Multiplicity? They don’t even need to look identical like the moron clone that loved eating pizza. Or how about a Face Off scenario? You just need to find a frumpy Ewok shaped person and slap Hillary’s face on him/her. Boom, you are golden.

P.S. I am still not sure if I believe this conspiracy theory or not. I’ve been looking at these pictures like a game of Photoshop and I’m still not sure. If you are sick, you look like shit. But if I hear any conspiracy enough times, I’ll believe you. That’s why I will be the worst juror of all-time.

P.P.S. This blog opened up a quick conversation with Nate about the movie Dave, and I’ll be damned if it doesn’t have a 94% Fresh Rating on Rotten Tomatoes.