Some of you may have heard, Tom Brady has a lot of free time on his hands right now. Seeing as he’s bored as shit, he decided to sit down for an interview with New York Magazine. It was a revelation. Just a complete look behind the curtain to see what makes the god tick. What’d we learn? Glad you asked.

First, we found out he’s gotten a haircut. No more bowl cut part. 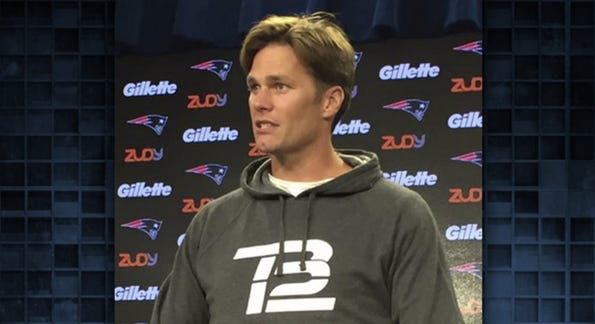 If you had, “Well his hair still looks like he’s stuck in the 90s,” as your planned insult once you TB12 gets back and is dominating, you better hit the drawing board. We don’t have photographic evidence of this just yet, but I’ll be you it looks fantastic. I’d also like to speak up for Tom regarding this haircut, if I may. Was it his best look? No, it wasn’t. I’ll be the first to admit that. But he was growing it out. Anyone who’s ever grown their hair out knows you hit an awkward stage that you just have to muscle through. Five to six months in you start to look like a real asshole and there’s nothing you can do about it. You can try some different looks, but facts are you just need to grin and bear it.

We also learned that Tom Brady smells like wood and looks like a cardboard cutout of Tom Brady. Finally got the answer to two eternal questions. What’s it like to see Tom Brady in person? He’s so beautiful that he looks like a photoshopped version of himself. What does he smell like? Wood. Such a fucking badass smell. He looks like a model but has the scent of a lumberjack. I’m not even a cologne guy but I need to go out and get myself a wood scented one immediately. Such a dagger to the people who say he’s a pretty boy. Oh yeah? What pretty boy have you ever met that smells like a fucking redwood? Thought so.

He’s got more suits than there are days in the year. Anyone else and I’d say that this is an exaggeration, like a child saying they can do a thousand jumping jacks or Donald Trump saying he’s worth over ten billion dollars. But with Tom? I believe it. He’s got at least 370 suits and there’s not a doubt in my mind about it. Wouldn’t be surprised to learn that they have a whole dry cleaners set-up in their basement with suits and Korean slaves working around the clock to make sure everything’s ready to go the moment it’s needed. Tom deserves that.

Finally, Tom revealed that he’s never had a strawberry or a sip of coffee. The sip of coffee we actually knew, TB12 let us know that in the famous nightshdaes interview. the strawberries are a new one. Never had a strawberry? Guess what, I was eating a fruit bowl (yeah I’m dieting, whatever) as I read the article and immediately picked all the strawberries in the trash. Stupid ass butt plug lookin fruit, fuck you. I used to be a big strawberry guy. Chocolate covered strawberries, strawberry Air Heads, Special K with strawberries, even used strawberry lube once (the girl thought that’s what her vagina tasted like, didn’t have the heart to tell her the truth). But now? Fuck strawberries. If Tom doesn’t get down with you then neither do I. Solidarity, my brother.