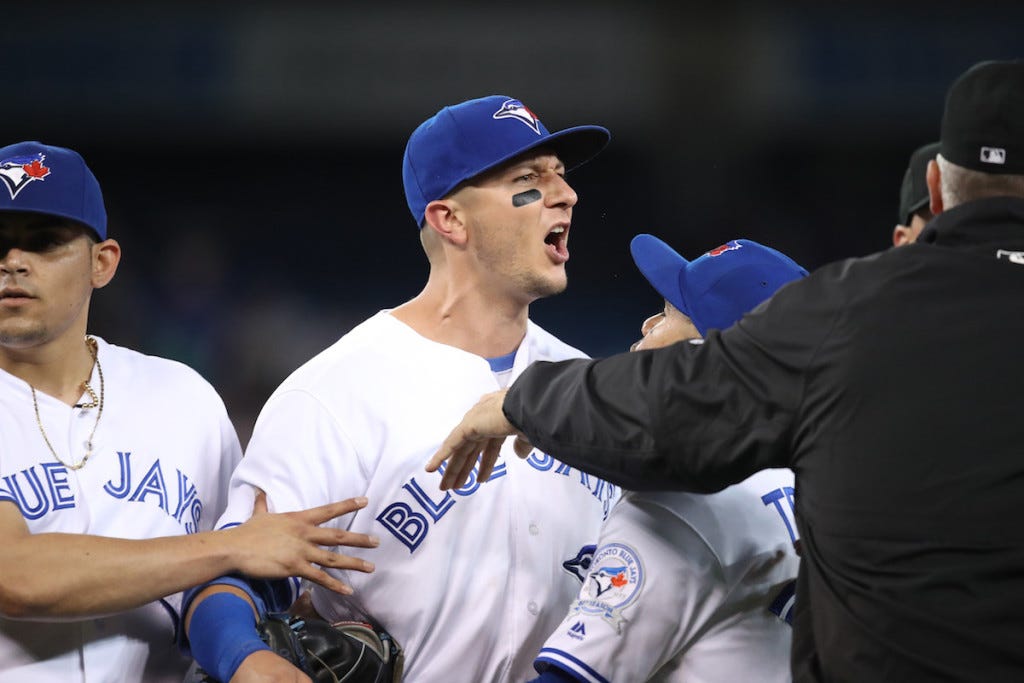 Before I get into the benches clearing part of this story, I just wanna say one thing. Last month, I had some tweet go viral, because I made a joke about Blue Jays fans being new to baseball, and their lack of baseball knowledge in general, because they’re a huge bandwagon fan base right now. After outrage spread through Canada, like news of Terrance and Phillip getting cancelled, these syrup-chugging idiots tried to refute my claim that they were bandwagoners, so I had to put them in a bodybag real quick.

How is that relevant to this story? It’s not even like Roberto Osuna deserves a pass for this — he doesn’t — but the fog horn operator? You fucking kidding me, bro? Just because your closer celebrates the final out of the game, does not mean that the final out of the game has actually occurred. I’m assuming that wherever the Lord of the Fog Horn is located in the Rogers Centre, there’s gotta be a monitor in there with the game feed on it. If you’re watching the game on a screen, which I’ve gotta believe Foghorn Leghorn is, then there’s no excuse for pushing the red button on a blatantly dropped foul tip. You were following Osuna’s lead, and he was very wrong. What’s the lesson here today, Kermit the Fog? Be a leader, not a follower.

Anyway, onto this pointless bench clearing incident. On the surface, without any context, you’d think, what? Steven Souza Jr. took exception to Osusa prematurely celebrating a strikeout and a victory that he didn’t actually attain, and that Souza probably said some shit, and blah, blah, blah, testosterone, let’s all get up and yell at each other, and have people hold us back. Well, according to Blue Jays catcher Russell Martin, who apparently was at the center of this — not Osuna, or Troy Tulowitzki, who would later insert himself in the middle of this for some unknown reason — it was actually just one big misunderstanding.

The body language on the field would certainly indicate some sort of miscommunication, especially with both parties who were most involved, Martin and Souza, being calm and understanding at the end of it, with Souza visually indicating that it was his fault at the end. So, if the whole thing was just one big misunderstanding, and there was no problem between the two sides, then what the fuck was Tulowitzki so mad about? Oh, he doesn’t wanna talk about it.

Acting like a dickhead for no reason, and then not holding yourself accountable for it afterwards = HARDOOOOOOOOOOOOO