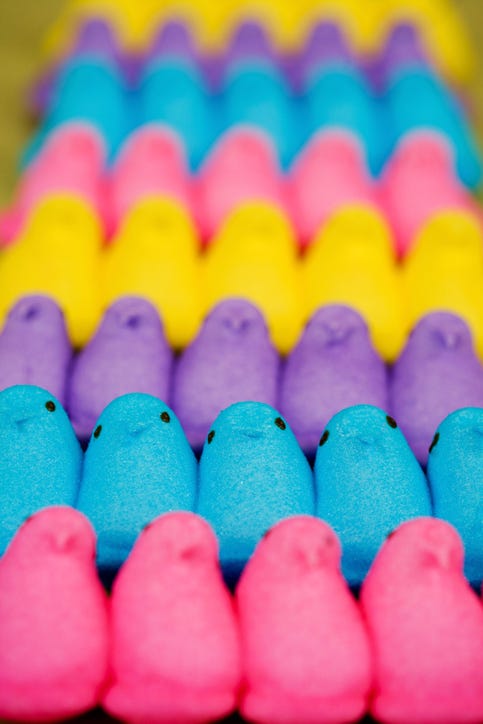 Philly.com Just Born Inc. employees began a strike Wednesday at the Bethlehem plant that manufactures Peeps marshmallow candy, the employees’ union, Local 6 of the Bakery, Confectionery, Tobacco Workers and Grain Millers announced. The company had already shipped its Halloween candy and most of its Christmas merchandise, but was gearing up for shipments for Valentine’s Day, a spokeswoman said. The union, with its headquarters in Horsham, said the plant’s 400 workers went on strike after the company proposed eliminating the workers’ pension plan, offering inadequate wage increases and increasing worker contributions to health care.

“The primary barrier to an agreement is the company’s proposal to have future hires participate in a healthy 401K rather than the unsustainable multi-employer pension plan,” company spokesman Matt Pye said in a statement. The union asked its members nationwide to boycott the company’s products, which include Mike and Ike, Teenee Beanee jelly beans, Hot Tamales and Goldenberg’s Peanut Chews. Union members at the Goldenberg plant in Philadelphia are not on strike.

Hey good news to the union of Peeps workers. I don’t think you have to worry about people getting behind your call to boycott the candies of your employer. Are you fucking serious with that lineup? Mike and Ikes are like a C- candy, but they look like LeBron on the 2008 Cavs compared to the rest of the candies. I don’t think this company can afford to lose a penny of business when their products include a spicy chewable candy and peanut chews that can break your teeth.

And then the centerpiece of this, Peeps. The worst holiday (and maybe overall) candy on the planet. Almost comically bad at this point. Peeps are one of those things that everyone hates on the internet like communism or Lena Dunham, but somehow there are still people that like eating raw marshmallows with crunchy, sand-like sugar. I just got grossed out goosebumps simply typing that sentence. And the fact that this happened after Peeps got greedy and tried to ruin every holiday instead of just Easter is perfect. A new seasonal candy aisle is a wonderland to walk down in the grocery store after they change it. But now that also means we see the latest awful concoction by the Peeps people trying to shoe horn their way into other holidays. Fuck you Peeps. And to the union workers, go find a job at a much better company that doesn’t sell a bunch of dog shit.