Don’t worry, guys. I know the whole world has been taken aback by the horrific actions of Colin Kaepernick over the past few weeks. I realize that this is a dark and troubling time in our nation’s history. But the good people of Philadelphia are here to make everything right again. Finally, we have a group of people who are willing to so boldly and courageously stand up against Kaepernick and voice the TRUE opinions of hard-working, blue-collar AMERICANS everywhere. We, as a city, didn’t ask for this responsibility. We we bravely accept it with open arms. And this man right here is our fearless leader. 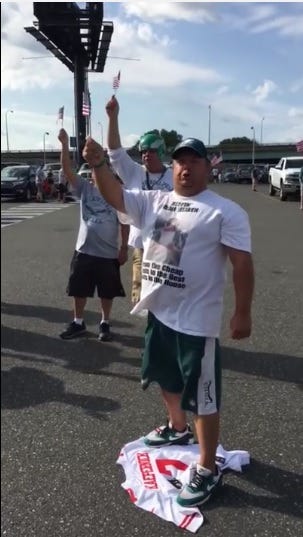 You see that right there? That is a man who loves his country just as much as he hates his gay son. Think about how much time and effort went into setting this whole shindig up. It couldn’t have been easy. I mean, the guy had to go out and buy all those little flags. Then he had to head on over to Modell’s to purchase the Kaepernick jersey. A task that had to have taken plenty of guts and fortitude to accomplish. Seriously. Think about how this exchange must have gone down.

MODELL’S EMPLOYEE: “Good afternoon, sir. Can I help you find anything today?”

FEARLESS LEADER: “Yeah, I’m looking to grab a Kay-per-nick jersey. It’s not for me though. Well actually, it sort of is but…”

MODELL’S EMPLOYEE: “Sir, I don’t care if it’s for you or not. The NFL jerseys are all over there”

FEARLESS LEADER: “But that’s the thing. It’s not for me. Seriously. Me and the gang are heading down to the Iggles tailgate on Sunday and we’re gonna sing the national anthem and…”

MODELL’S EMPLOYEE: “Like I said sir, I don’t care”

MODELL’S EMPLOYEE: “Sir. I’m gonna have to ask you to leave.”

Come to think of it, maybe that is why Kaepernick jersey sales have sky-rocketed over the past few weeks. Just a bunch of middle-aged racist white dudes buying up all the Kaepernick jerseys so they can burn them and stomp on them. But yeah, he finally got all the materials he needed, probably set up some sort of Facebook group to plan the event, probably spent the entire week before the game telling everybody about the gang’s big plan to stick it to a millionaire athlete who has no idea they exist, and then it was show time.

Yikes. Maybe he should have practiced in the shower a few times before the main event. Never a good idea to start off that high. Way out of range. A little pitchy, dawg. It’s gonna have to be a no from me. Good news, however, is that this dude at least had a plan for being bad. Here comes the X-factor. 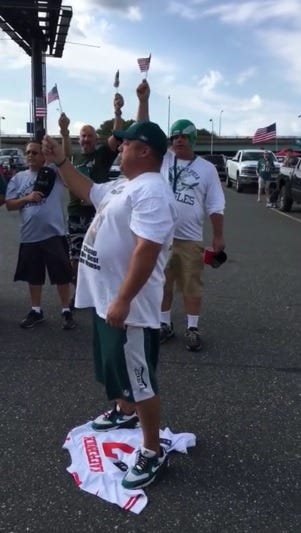 Boom. Bring in the dude wearing a helmet. Now nobody knows if they can make fun of this video or not because they’re unsure if they’ll be making fun of a mentally handicapped person. Brilliant. And then, from the heavens above, a miracle came out of nowhere. This dingus trying to capture the concert for snapchat. 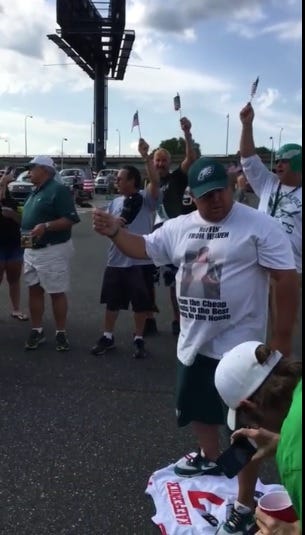 Thought for sure we were about to witness a Nike to the face here. He’s just giving him that look like “what in the fuck does this pussy ass Millennial think he’s doing right now?”. If there’s one thing that white dudes who hate black people don’t appreciate, it’s being put on camera without their permission. But like I said, this was a miracle. Because it gave this guy just enough of a break to finally find his range. Brought it down a notch or two when he hopped back in the chorus and that’s when the magic happened.

Stomping on that jersey with the passion of about a thousand divorces. Only way this day could have gotten any better for this guy would be with an Eagles win and a parking lot ight before heading back home. I’m sure he hit the hat trick. 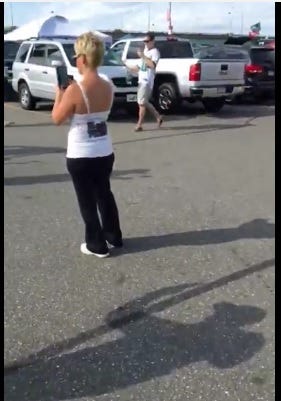 By the way, I’ve seen this haircut a million times before in my life. That’s a Delco Damsel right there. Willing to bet the house this group was Ridley born and raised.