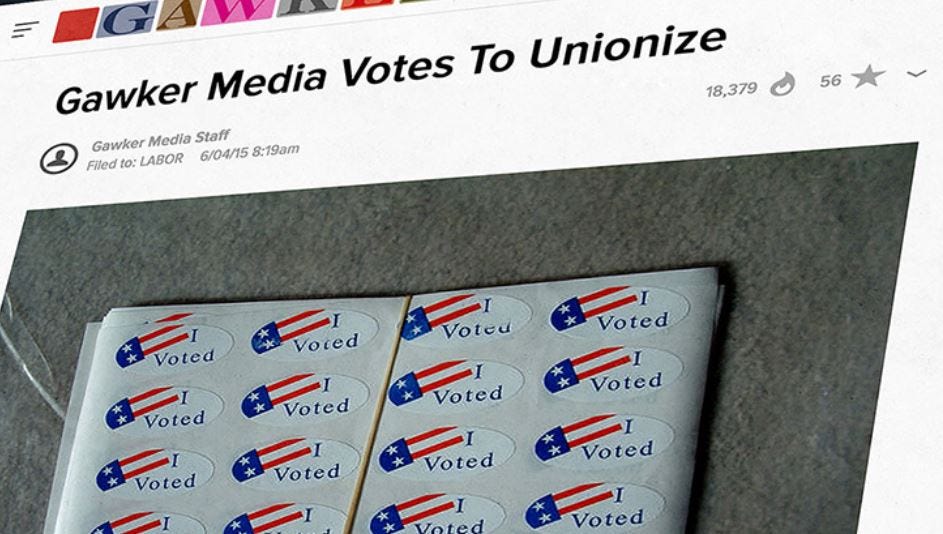 Mediate – Gawker is no more, but Gawker Media––including Deadspin, Jezebel, etc.––is now under Univision ownership. And they’re not happy about Univision taking down six old posts. In fact, Mediaite has learned that have been talks among Gawker staffers about a walkout. The deleted posts include “Man Acquitted of Sexual Assault Sues Blog for Calling Him Serial Rapist” and “Wait, Did Clowntroll Blogger Chuck Johnson Shit On The Floor One Time?”, and all six were taken down due to ongoing litigation they’re all involved in. The vote was this past Friday, and Gawker Media executive editor John Cook reacted by saying, “Disappearing true posts about public figures simply because they have been targeted by a lawyer who conspired with a vindictive billionaire to destroy this company is an affront to the very editorial ethos that has made us successful enough to be worth acquiring.”

And then the Gawker Media Editorial Union put out a lengthy statement on Gizmodo today decrying the six deletions:
This decision undermines the foundation of the ability of Gawker Media’s employees to do our work. We have seen firsthand the damage that a targeted lawsuit campaign can do to companies and individual journalists, and the removal of these posts can only encourage such attempts in the future.

We condemn this action by Univision’s executives in the strongest possible terms. It sets an alarming precedent both for our relationship with our new owners and for the business of journalism as a whole. It is unacceptable for a publisher to delete legitimate and true news stories for business reasons. We now face the task of trying to rebuild trust with Univision and find a resolution that will allow us all to once again do the work that we were all hired to do without fearing that our parent company might fail to support us when we need it most. We hope that Univision will take extremely seriously its responsibility to reach an agreement with this company’s writers and editors that will allow us to safely do our jobs here.

They spoke with a WGAE rep about what a strike would look like and even contemplated the idea of going into “safe mode”––in which they would protest by “writing weak or friendly articles about the world.”

Is there a more insufferable group of people on the planet than the Gawker Writers Union?  Do they not understand that Univision is a business?  I mean how did it work out for Gawker last time they refused to take down a post?  Oh right they got sued into bolivian by the Hulkster. Seriously I feel like the only people who don’t realize Gawker went bankrupt and was sold off yet are Gawker employees.   Like the Gawker editor was actually bragging about how their past behavior got them acquired.  Yeah not by choice bro.  And let’s not make it seem like Gawker is the NY Times either.  Not exactly the bastion for great journalism.  I mean neither are we but if somebody sues us/KFC over a post I can pretty much guarantee it’s coming down.