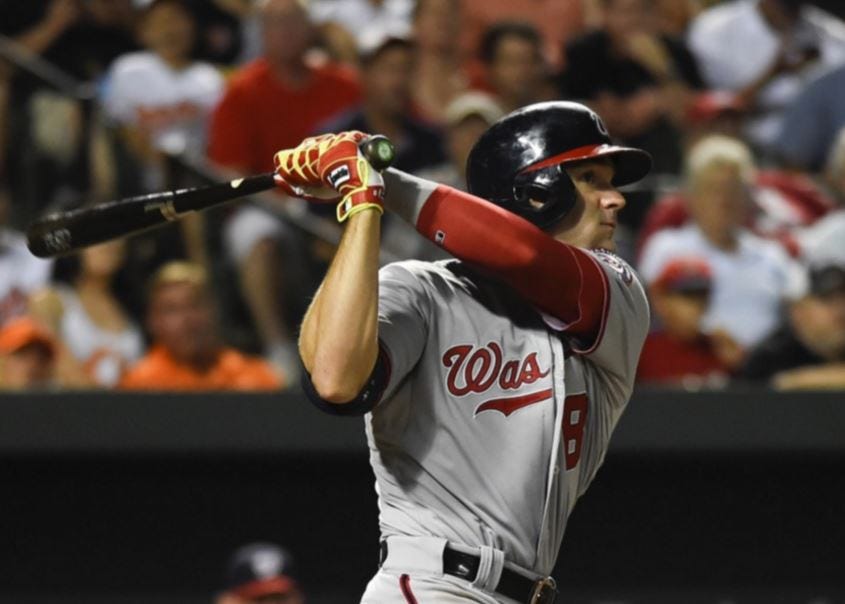 Could Danny Espinosa be any more erratic than he has been this year? He had an incredible month of June where he blasted 9 homers, hit .309, and made me feel like an idiot for wanting him out of the starting lineup. If you take away that Daniel Murphy-esque June, he’s hitting a buck 98 and looks like the mediocre hitter that we’ve come to know over the past seven years. Playing Danny Espinosa every day has been Dusty Baker’s M.O. all season and while Dusty has been pretty good and there wasn’t much wrong with that in the past, its time for a switch. Sure Ben Revere has been even worse than Espinosa but he’s also got a lot more upside; why not start Espinosa only against lefties (.258 career vs. LHP, .218 career vs. RHP) and start Ben Revere against right-handed starters. If something like this were to work, Trea Turner would shift to SS against righties and keep the rust off there, the Nats’ overall lineup would improve, and something could click for Revere and transform him back into the spark-plug that he has been in the past.

Since his phenomenal month of June, Espinosa has been K-ing about one third of the time, has nearly four times as many strikeouts as walks, and has 12 extra base hits in his past 62 games – that amounts to an average of just 31 total extra base hits in a full 162 game season (that’s not good). After slugging .663 in June, Espinosa’s SLG% looks a lot more like a batting average in the past 2 months (just .307). Sure, Danny Espinosa provides pretty good defense but the lack of a bat far outweighs his good glove.

The best way to extract value from the Nats current roster is to play Ben Revere against right-handed starters and hope he picks up his play in time for the playoffs and play Danny Espinosa against LHP where he has at least a serviceable career line. Sure, Ben Revere is traditionally better against lefties too but his splits are nowhere near as radical as Espinosa’s. A Revere-Espinosa platoon (with Trea Turner alternating between centerfield and shortstop) is the best way to maximize value in the Nats lineup.
Follow @SAlaskaBarstool