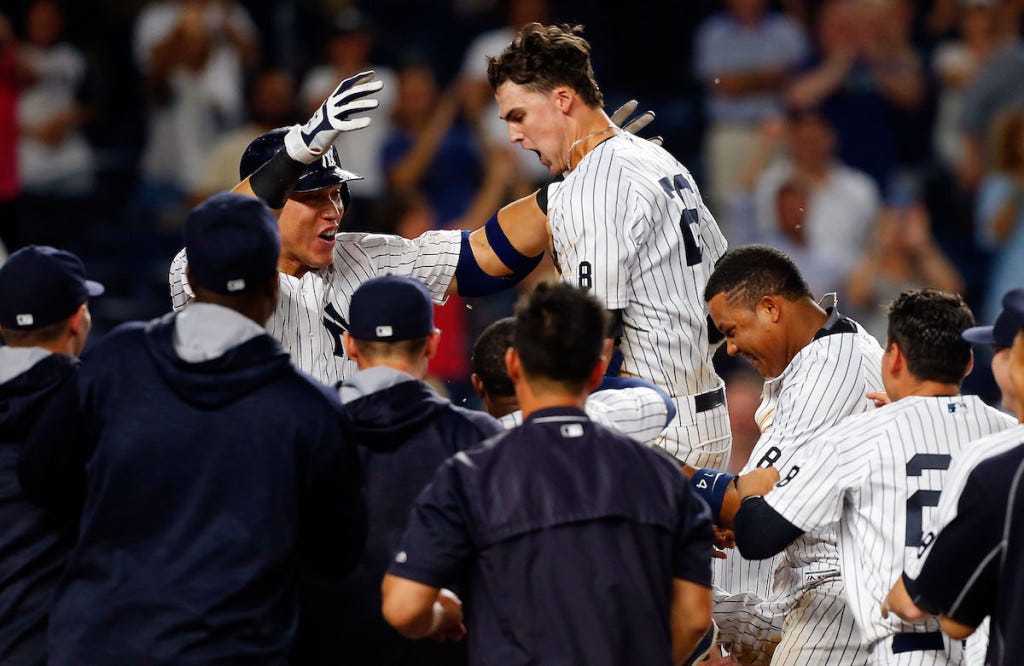 I can’t even believe I have to ask this fucking question. Should we be worried about the Yankees sneaking into the postseason?

On August 2, LESS THAN A MONTH AGO, the Yankees were a .500 team with a record of 53-53. Three days later, Mark Teixeira announced his retirement at the end of the year. Two days after that, the Yankees and Alex Rodriguez announced that he would be released after his final game at Yankee Stadium on August 12. With Rodriguez out of the picture, and Teixeira’s time about to expire, the Yankees wasted zero time integrating a flurry of new, young talent, unlike anything we’ve ever seen from this organization in the last 15+ years. Gary Sanchez was recalled on August 3, day one of New York’s resurgence. Tyler Austin and Aaron Judge made their major league debuts the day after A-Rod’s release, and both homered in their first at-bats.

Oh, and I forgot to mention the most important detail of them all! In the week leading up to the trade deadline, the Yankees traded their best hitter in Carlos Beltran, and two of their best pitchers in Aroldis Chapman and Andrew Miller, intentionally depleting the talent on their roster by a significant amount. Basically, what the Yankees did was they cut one of their arms off and then challenged the rest of the American League to a fist fight. Bold move.

So, let’s examine just how in the fuck they’re actually doing what they’re doing. I’ll say it again — the Yankees had a .500 record on August friggin’ second. Since then, they’ve gone 21-12, which is tied with the Kansas City Royals for the best record in the American League, trailing only the Chicago Cubs (24-9) for the best record in the majors over that span. The question then becomes, who’s been stepping up for the Yankees that hadn’t been before? Well, the answer to that question is Gary Sanchez, and the only reason he didn’t step up before is because he wasn’t on the roster. Since being called up on August 3, he’s hitting .348 with an 1.136 OPS to lead the Bronx Bombers, and his OPS is fourth in the majors over that span.

But a team can’t go on a run like this just because of one guy. Starlin Castro has really elevated his game, hitting .288 with an .827 OPS, Aaron Hicks has been pretty solid (.286 BA, .792 OPS), Chase Headley is actually doing something with his life (.270 BA, .780 OPS), and even Jacoby Ellsbury has been better (.276 BA, .752 OPS). But really, those are all your top offensive performers since the Yankees have turned a corner last month. Does anybody really blow your mind except for Sanchez? Not for me, no. Outside of Sanchez, they’ve been good, not great. As a team, since August 3, they’re hitting .268 with a .779 OPS, which means they’ve only been a little bit better than league average (.260 BA, .754 OPS).

That must mean that they’ve been getting great pitching then, right? Luis Severino began the year as a starter, then he went to the bullpen, then he started a couple games, and now he’s back in the bullpen. He’s got a 13.50 ERA Since August 3, so we can rule out Severino being a contributor to New York’s recent success. Michael Pineda (5.01 ERA), nope. Not him. Chad Green (4.91 ERA)? Not him, either. What about CC Sabathia (4.57 ERA)? Don’t think so. Maybe it’s Nathan Eovaldi (4.50 ERA) then? Negative.

That brings us to Masahiro Tanaka, who has a 2.08 ERA since August 3 in 6 starts. Over that span, only Jon Lester (1.55 ERA), Kyle Hendricks (1.60 ERA), and Carlos Rodon (1.91 ERA) have been better. However, out of those four pitchers over that span, Tanaka has walked the fewest (4), and has the highest strikeouts per nine innings (8.77). The Yankees are unbeaten at 6-0 in all of Tanaka’s starts since August 3.

I’m still confused, though. How the hell are the Yankees winning all these games? When you lay it out like that, for a team that went from the definition of mediocrity to having the best record in the league for about a month, the only standout performers have been Sanchez and Tanaka. But it’s been enough, I guess. Since August 3, the Yankees are averaging an even 5 runs per game, with a team ERA of 4.18. The numbers add up. You don’t have to blow every team out of the water in order to go on a run like this, so those margins would lead one to believe that that’s a winning formula, and it has been.

To answer the question, is it time to start worrying about the Yankees making the postseason? You bet your ass it is. They’re four games back in the division, and two games out of the Wild Card, just a game back of the Detroit Tigers, the only team standing in front of them and the second Wild Card spot-holding Baltimore Orioles. But as a followup question, IF the Yankees were to make it to the postseason, are they a team that you should be afraid of? Looking at these numbers, no. I don’t think so. Outside of Tanaka, they have no pitching, and there’s nobody in their lineup outside of Sanchez who opposing pitchers would have any problem facing.

It’s been one hell of a run, and if they make it to the postseason, they will absolutely deserve it. But for this young group of Yankee players to come in and make as big of an impact as they have, completely turning an entire season around in less than one month’s time, it makes you wonder what they’ll be capable of doing over a full season in 2017.