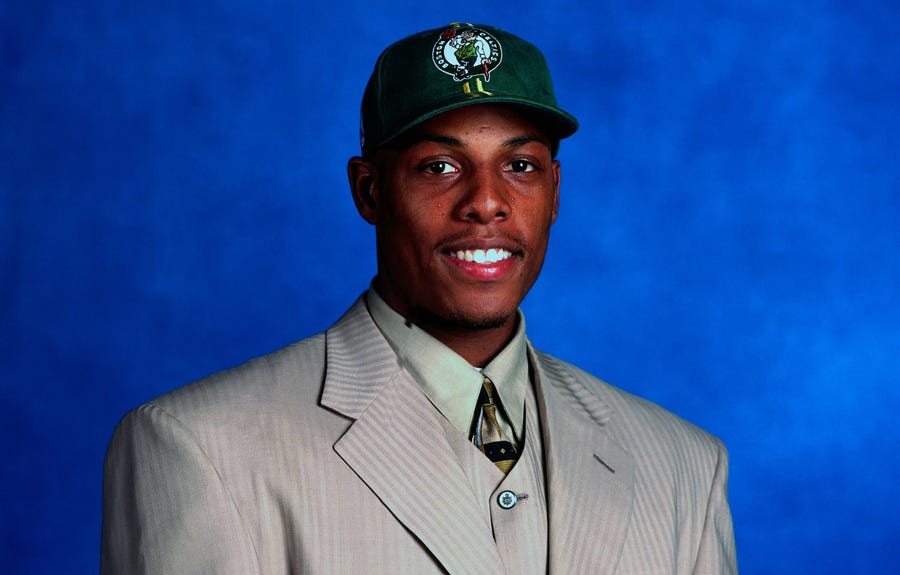 Doc Rivers came out the other day talking about how when Paul Pierce finally retires, it should be as a Boston Celtic. For a guy who hopped on the first flight out of Boston once it became clear it was time for a rebuild, he sure does love talking about them. That’s neither here nor there. The point of this blog is to focus on that first sentence. Putting aside the fact that this could have very well happened THIS year if Doc didn’t get cold feet this summer, I actually agree with everything he’s saying. Pierce needs to come back. I don’t need Kevin, or Ray, or Rondo, or Perk, but Pierce is something I think we all need, even if deep down you don’t know it. Sign him to a deal, let him play 1 game, and call it a night.

That got me thinking, what would that night look like? We’ve already dealt with The Return and all of that, but this would be different. This would be more of a celebration and a send off into the Hall Of Fame for one of this franchise’s most important players. So here’s what I want you to do. I want you to close your eyes (not literally though since you’re going to need to read this, but you get the idea) and go on a journey with me to the 2017 NBA season opener. Ready?

The date was October 25 2017 and there was a special buzz up and down Causeway Street that bled into the historic North End and carried down to the Waterfront. Since Danny Ainge signed Paul Pierce to a one day deal just a day before the season, fans were understandably excited to send off a generation’s favorite player one final time. The line outside the players lot on Causey street had Green Teamers camped out since the night before, waiting to get a glimpse of The Truth.

The season would open against the Chicago Bulls, which was fitting because there was no other NBA team Pierce faced more. 64 times in all. As players started arriving at the Garden a few hours before the tip it wasn’t until Paul Pierce got there that things felt real. As a long time NBA vet, you would think Pierce would arrive in something sleek and expensive, but understated. Not this time. Not for this game. Instead Pierce rolled out this beauty from his personal collection 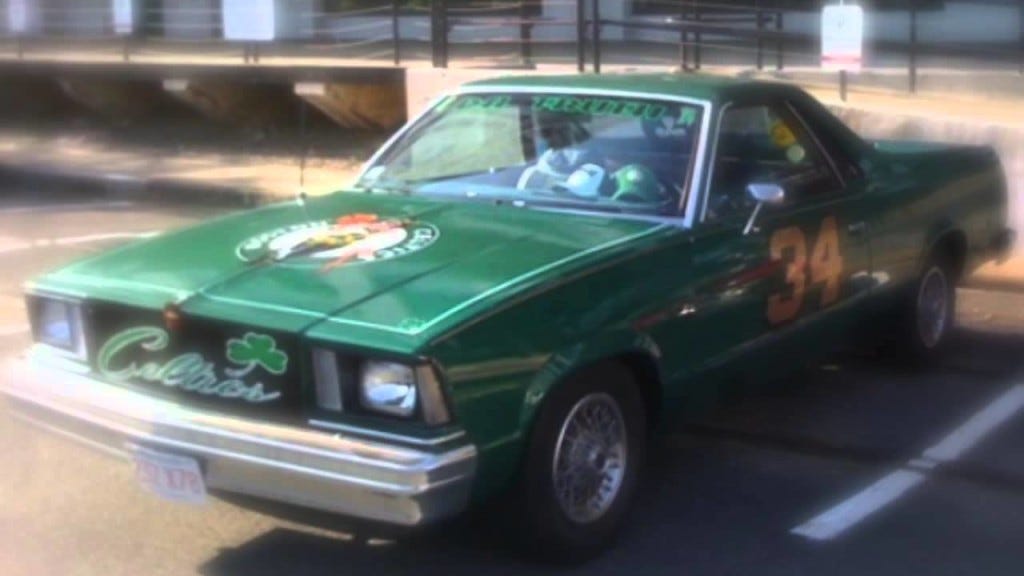 After signing a few hundred autographs, Pierce makes his way into the arena to get his normal pregame treatment and to start mentally preparing for what’s to come.

He gets a weird feeling as he opens the door, its been a while since he’s come in the home players entrance. Paul says hello to the familiar faces he sees as he makes his way through the halls, and suddenly, he is stopped in his tracks. There it is 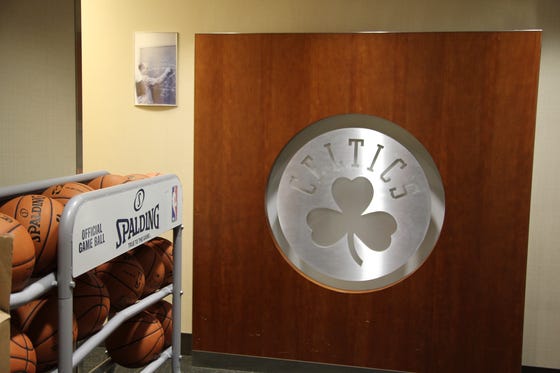 Pierce places his hand on the shamrock as a final goodbye and walks into the locker room he once owned for 15 years. Right away he’s greeted by some old friends. Just a couple of guys who put their differences behind them in an effort to celebrate their buddy. Ubuntu at its finest.

A quick glimpse at the clock tells Pierce that it’s time to get the show on the road. After helping release Ray Allen from a Shaq headlock and Garnett noogie, Paul makes his way to his lockermate and longest tenured Celtic Avery Bradley. Avery has come a long way since he was a young pup in 2010, and he’ll be the first to tell you Pierce had a lot to do with that development. Pierce spends maybe 15 seconds just standing in front of his locker, almost in disbelief this is even happening. 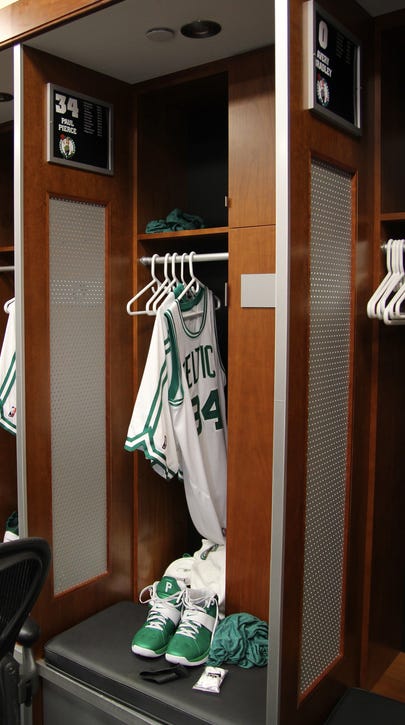 As Pierce is finishing tying his shoes Boy Wonder Brad Stevens makes his way over to the legend and lets him know that not only will he start the game, but he has been made an honorary captain. Isaiah said it was only right. After a quick run of the gameplan, the team heads out to the tunnel and Pierce taps the exit sign as he jogs by, and it’s time for Celtics basketball, one final time. 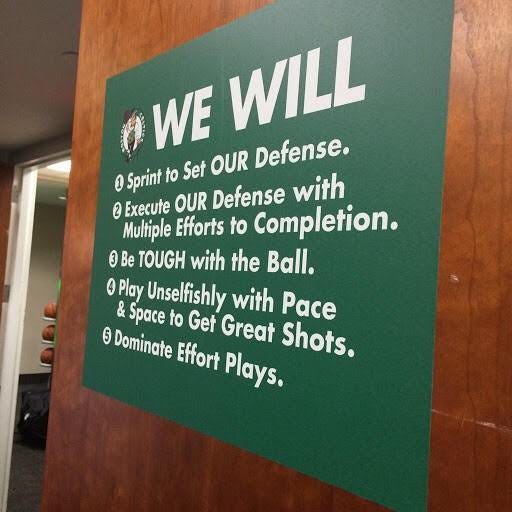 Once the team is on the court, the Garden is already at mass hysteria. That dabbing kid is dabbing, Aztec Gino is going crazy, chest pump guy is fucking killing it, the environment is everything that makes the Garden a truly special place. The starters start to get announced, with each name the crowd getting louder. Eddie Palladino gets through Isaiah, and Avery, and Amir, then Jae, and finally, that familiar call arrives

Here’s the thing, Pierce doesn’t truly know how much he had left in the tank. His 2016 season was spotty, and with a young Jimmy Butler on the other side, not many figured Pierce would be able to do much. They figured wrong.

On the Celtics first possession Isaiah gets the ball over half court and Pierce catches the ball on the left wing. Jimmy is jawing at him. Pierce is jawing back as the shot clock winds down, 15 seconds. Being old as shit, Butler knows Pierce has no intention of driving, and he continues to sit there and talk, 7 seconds. Now the crowd is getting loud, this is some way to start, and as the shot clock buzzer goes off. Nailed it.

“Al Harrington 2.0!!” the crowd screamed. Pierce laughing his way back down the court can only shake his head. Maybe this was going to be a special night after all. After a Rondo missed jumper Pierce took the ball up the court like his did so often during his time in Boston, and after a quick pick and roll he found himself across from a tired Taj Gibson. He sized Gibson up, and the crowd sensed what was coming. The Pierce Elbow Stepback. You could argue this was one of the most effective shots in NBA history, and it wasn’t even close, Gibson had no shot. Looked just like it did in the 08 Finals

With the game being a 20 point blowout Celtics lead, Brad puts Pierce back in one final time late in the fourth quarter for a final goodbye. He somehow draws a foul, and as he approaches the line the Garden gives him the farewell he deserves. Don Orsillo used to say on the last out of a Red Sox game that “Fenway stands as one” and in looking around there was not a person in attendance not on their feet, young or old. It was magical

As the clock wound down, all that was left for Pierce to do was sit back and reflect. Somehow, some way, he was able to turn back the clocks and pour in a 34 point 3 rebound 4 assist 3 block 4 steal performance. A 34/3/4/3/4, incredible. 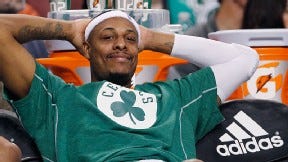 So should the Celtics find a way to bring back Paul Pierce when he retires? I think we all deserve a night like the one above, so I say absofuckinglutely.