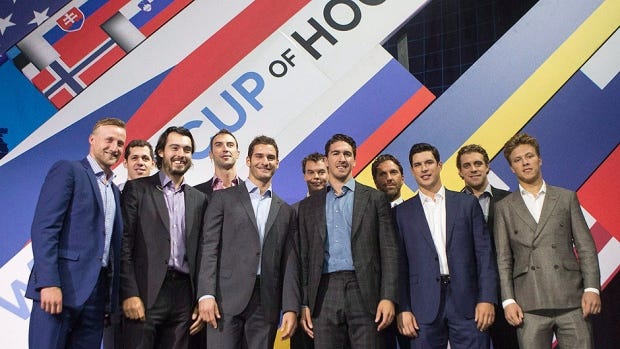 We’re less than 10 days away from the start of the 2016 World Cup of Hockey. Just to clear some things up to my co-workers from their performance on the Rundown yesterday, no, the World Cup of Hockey is not a brand new event. Is it only the third World Cup in 20 years? Yes. So it midas whale be new especially since it’ll also be drastically different than the 1996/2004 World Cups. Russia will be in the mix this time and instead of letting Germany go out there to embarrass themselves, there will be a European all-star team which was basically created just so Anze Kopitar could be in the tournament without having to invite an entire Slovenian team. Also, there will be a North American 23U team. The best young players that the United States and Canada have to offer. A little racist of the NHL to not invite any Mexicans to play for Team North America since they technically belong to this continent. However, that’s just how the NHL rolls. So yeah, not a brand new event but basically new considering there hasn’t been a World Cup in 12 years. No, it’s not the same thing as the world Juniors or the World Championships since this is a tournament that is, for the most part, strictly an NHL tournament.

Now that that’s out of the way… let’s talk about the hottest topic in the streets these days–national anthems. As mentioned above (and for the past 12 months), there will be a Team Europe and a Team North America. Since neither of those things are nations, it’s a little hard to come up with a national anthem that the players could protest during for both of them. It was reported that they were working on some sort of hybrid anthems for both teams, but yesterday each team decided to take the easiest way out. 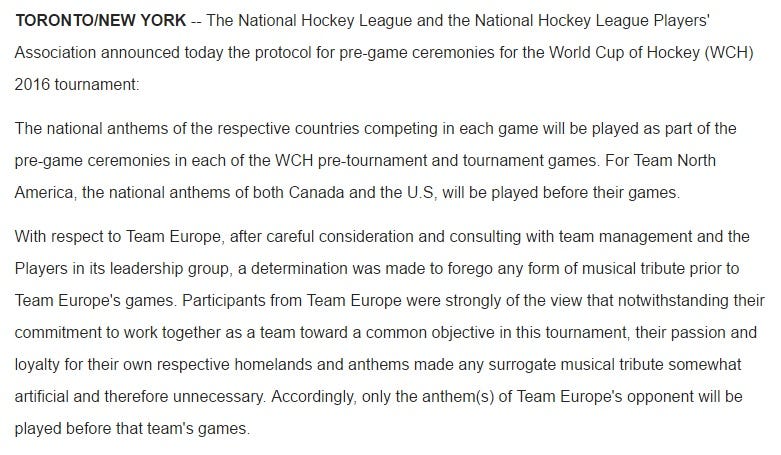 That’s pretty fucking lame, if you ask me. I mean it makes plenty of sense and definitely seems like the easiest way to go about it without causing any unnecessary controversies. But still lame nonetheless. So since we still have 9 days until the World Cup of Hockey officially gets going, here are some better options for both teams to go with.

– Anything by the band Europe. Feel like this one is a layup.

– The German A-Capella group from Pitch Perfect 2 performing “Light ‘em Up”. 1) becasue they are Europeans. 2) Because if there’s one thing the NHL loves, it’s a healthy dose of Fallout Boy.

– Circus theme music. Maybe not for Team Europe to pick themselves. But act like you wouldn’t laugh if somebody in Toronto hijacked the PA System during the pregame ceremonies and threw this on.

– Smells Like Teen Spirit. Because they’re kids. Also because I’m sure there’s at least one guy one the team who will tell you that Nirvana is one of his favorite bands ever yet can’t tell you the name of another song besides this one.

– Youth Of The Nation. Actually, I don’t even need the P.O.D. version. If we could just get the guys on the team to chant the chorus before each game, I think that would be deathly terrifying. Like some sorta Children of the Corn cult shit.

– Danza Kuduro. As Hank pointed out on PMT, it’s one of the hottest songs ever made. EVER. Plus, this will finally put that little bit of Mexican flair into Team North America that they’re looking for.

(Please don’t yell at me if none of these videos work on the website. It’s not my fault that YouTube is a piece of shit)