FB - According to Starbucks Melody, the coffee chain is testing a “Weekend Brunch” in the greater Portland and Seattle areas. Brunch items include baked French toast, Belgian waffles, and quiche. If you’re already tired of Starbucks’ pastry rotation, the new menu might be a welcome change. 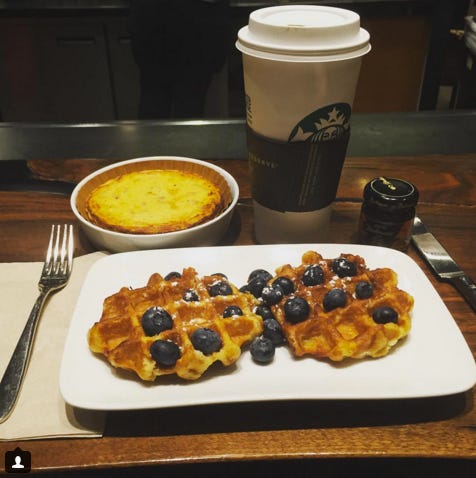 Lots of things about being an adult suck dick. Having to bills. Having to be responsible for your own actions. Having to put on pants and go into an office. But a few things don’t suck about being an adult. And one of those things is without a doubt, brunch. At first, when I was a young lad around 21 or 22 years old, I didn’t see the appeal of brunch. Why pay a lot of money for weird shaped foods at an odd hour? God, I was naive. It’s like the future was right in front of me, like wireless headphones, and I was poo poo’ing it because I didn’t understand how great it was. And boy, brunch is GREAT. A bit hungover from the night before? Blood Marys on Bloody Marys on Bloody Marys. Not sure what you want? Order 10 small plates and have yourself a day. The options are limitless when it comes to brunch….BUT….

But brunch is only awesome because it’s a social gathering, like most, that revolve around drinking. To put it mildly, the world revolves around alcohol. I can’t remember the last time I made an important life decision that wasn’t influenced by alcohol, or led to drinking alcohol. Unless Starbucks is pouring Frapemosas and Grande double shot bloodys, I want NO part of it. I cannot be dragged, nor should you be dragged, to any sort of brunch where you’re paying out your ass for coffee, a couple of stale waffles, and there isn’t bottomless alcohol to get white girl wasted on at noon.

So Starbucks, figure it out. Don’t soil the good name of brunch without at least meeting the bare minimum of expectations. Just because you serve some quiches doesn’t make it brunch. Brunch isn’t just a time of a day, or even just a meal. It’s a lifestyle, a cultural phenomenon. Either come correct or don’t bother coming in my face at all. No half measures, Bux.