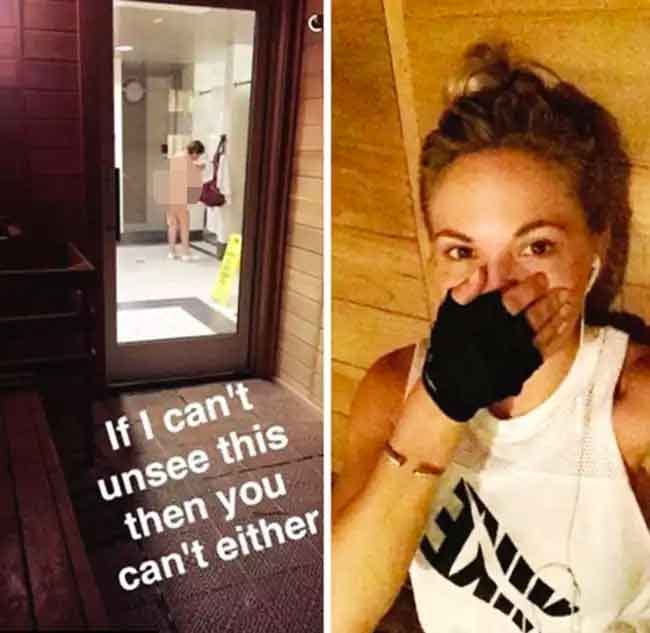 PREVIOUSLY: The Playboy Chick Who Snapchatted A Fat Lady Has Already Lost A Job, Got Banned From Her Gym, And Might Get Arrested

ABC7 – The woman who was body-shamed in a Snapchat photo posted by Playboy model Dani Mathers has been located by Los Angeles police, the city attorney’s office confirmed.

“We did receive the case from the LAPD. It’s currently under review from our office. We will be making a final decision soon but there’s no timetable at this point,” City Attorney Mike Feuer’s office told ABC News on Monday.

If a charge is filed, it would be a misdemeanor, likely with a six-month sentence.

Mathers admitted to posting a picture of a naked woman in a locker room at an LA Fitness gym with the caption: “If I can’t unsee this then you can’t either.”

The woman, described by authorities as being in her 70s, has not been publicly identified.

So it’s in the hands of prosecutors now on how they want to handle it after the 70-year-old lady indicated she wants to see her prosecuted. Dani Mathers has been trying to stay under the radar since the initial heat hit with her losing gigs, she hasn’t even tweeted since the initial controversy started blowing up almost two months ago:

My question at this point: Has any ten-second lapse in social media judgement cost someone so much in such a short period of time if she does end up getting prosecuted and going to jail? I mean this really was one moment in time of this girl being an old-school Mean Girls type hot chick and she could end up losing all her career options and end up living out Orange Is The New Black instead because of it. That’s SO much time to have something hanging over your head for a fleeting oversharing social media dick move. Especially considering that the lady is 70 years old and must have had zero fucking clue what a Snapchat is in the first place until the LAPD explained it slowly and using old episodes of The Lawrence Welk Show. I’m not defending Dani Mathers, not saying everyone should go around Snapchatting naked old ladies (Nate may respectfully disagree), but that’s such a stiff price to pay. A powerful lesson to learn for hot chicks who make a career being naked and usually never have to worry about a thing.