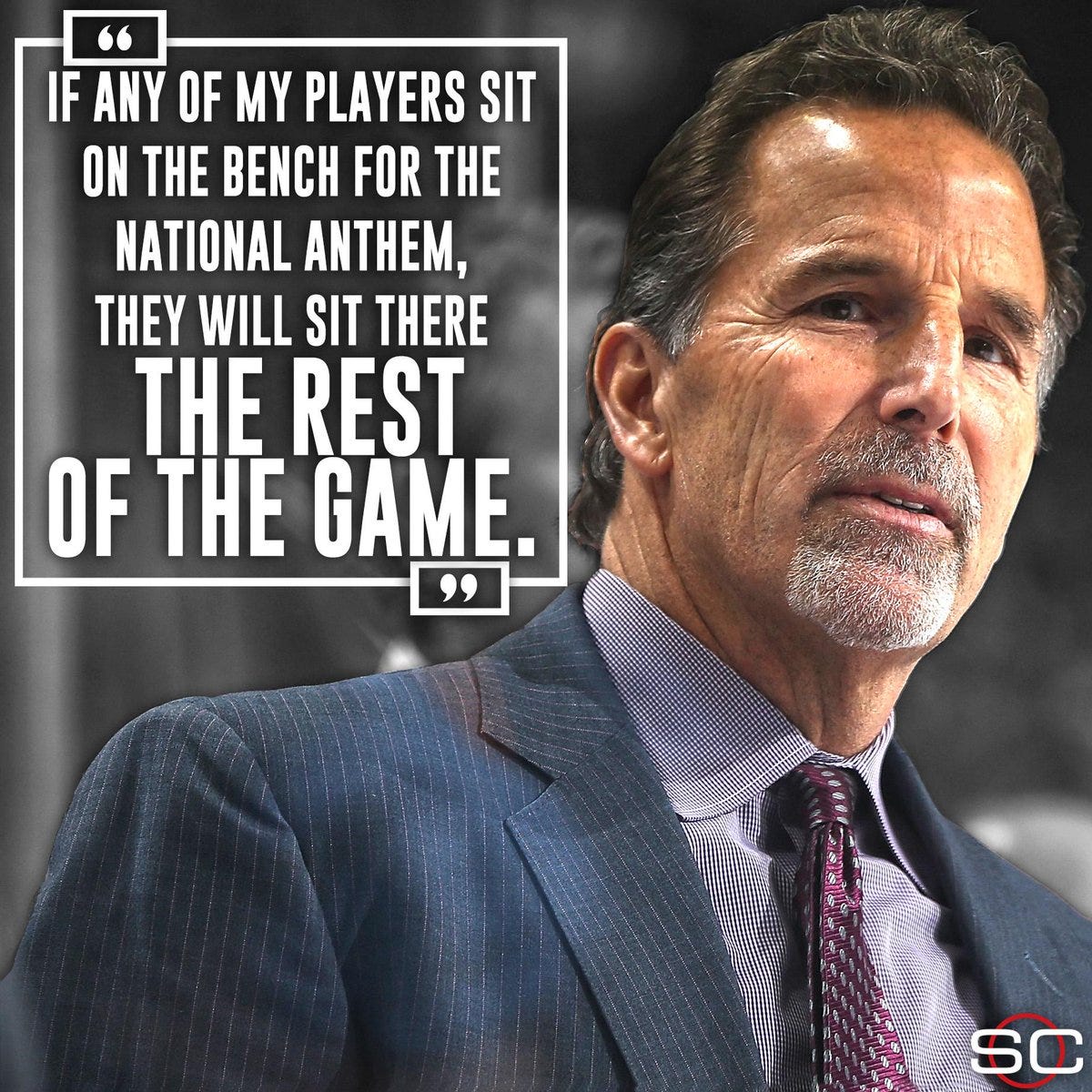 Fox Sports - The always-colorful John Tortorella will be behind the bench as head coach of Team USA during the World Cup of Hockey later this month. He’s already making it known that he’s not going to tolerate any national anthem protests from his players during the tournament. “If any of my players sit on the bench for the national anthem, they will sit there the rest of the game,” Tortorella told ESPN’s Linda Cohn on Tuesday. San Francisco 49ers quarterback Colin Kaepernick has made headlines over the past few weeks thanks to his protests of the national anthem before his team’s preseason games. Kaepernick has chosen to remain seated or kneeled for the anthems as a way to speak up against police brutality and racial injustice in America. Several other athletes — including Seattle Seahawks cornerback Jeremy Lane and American soccer player Megan Rapinoe — have followed in the quarterback’s footsteps. It’s unclear if any American hockey players were planning on exercising their constitutional right to protest, but Tortorella’s stern warning makes it clear that he doesn’t want any part of it during the World Cup. It seems unlikely that anyone will go against his wishes, but if it happens, it’ll be interesting to see if the coach follows through with his threat to bench the protesting player(s). It’ll also be interesting to see what kind of media firestorm ensues if he does.

John Tortorella with a little gasoline on the fire! Thanks, Johnny! Just what everyone wants…more National Anthem drama!

Now to be clear – John Tortorella is coaching the USA Mens team for the World Cup of Hockey. That makes a big difference considering if you’re on that team you agreed to represent the country. Another X Factor in this situation is that John’s son, Nick, is a BAD ASS MOTHERFUCKER in the 75th Ranger Regiment. So when John Tortorella is sent to rep his country and his son reps this country on a much more significant level than playing hockey, you better believe he wants everyone on his feet for that song. I dont think this is John Tortorella not liking Colin Kaepernick or what he did. He just has his own code given his family ties to the armed forces and the job he’s accepted.

And when you’re on a team, on this level, what the coach says goes. Coaches and managers and franchises control athletes lives off the field all the time. They tell them where to be and when to be there. How to cut their hair and how to look. How to behave off the field. And if you break those rules you get punished. Reprimanded somehow. This is John Tortorella’s ship and he’s deciding how they will all act as one unit during their time together as a team, and if you choose to use that time for you political statements, then you’re not meshing with his game plan and you will be treated accordingly.

I actually dont have as much of a problem with Kaepernick’s actions anymore. I think he’s made it pretty clear when he stood for the troops and honored them during halftime of that preseason game after the initial protest that he’s able to divide up his allegiances and his support in different instances. Hold two different thoughts in his brain at the same time, which is something people cant seem to do. I originally said he threw the baby out with the bathwater and I kind of think now, sometimes, if you really want to address that shitty bathwater, you need to do something drastic enough to cause a stir, which would be tossing out that baby. I think Kaepernick still probably takes a LOT of shit in this country for granted…A LOT…and thats why hes still being kind of an asshole, but I’ve softened on him since it initially happened. Its his right to try to raise awareness for an aspect of this country that quite frankly stinks.

But as a head coach its John Tortorella’s right, and quite frankly his job, to say that if you want to pull a divisive stunt on the team’s time, you’re riding the pine. Take your protests elsewhere. My job is to win a Gold Medal and protests like that can divide a locker room, can mess with team chemistry, and overall just create drama. Taking advantage of the privilege to be on a sideline or on the ice is a distraction and anybody who knows anything about John Tortorella knows he doesnt fuck around with distractions.

Everybody has the right to freedom of expression but when you’re being paid or accept a role on a team with certain expectations, that expression is going to have consequences. Plain and simple.