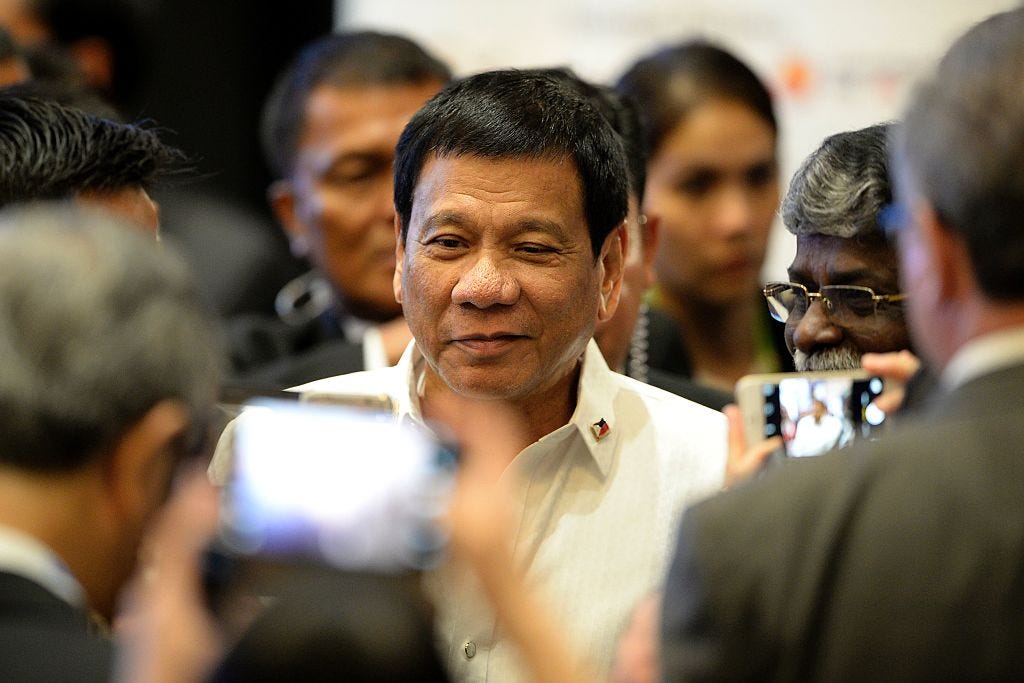 The Guardian — The president of the Philippines, Rodrigo Duterte, has expressed regret for calling Barack Obama a “son of a whore” – a remark that led to the US leader cancelling their meeting during a regional summit in Laos.

CNN — “Who does he think he is? I am no American puppet. I am the president of a sovereign country and I am not answerable to anyone except the Filipino people,” Duterte scoffed in a speech Monday. “Son of a bitch, I will swear at you.”

In a statement read by his spokesman, Duterte said the remark was not intended as a personal insult. “While the immediate cause was my strong comments to certain press questions that elicited concern and distress, we also regret that it came across as a personal attack on the US president…”

Always fun checking in with Rodrigo Duterte. Remember, this is the guy that pledged to murder 100,000 criminals and throw their bodies in the bay. And then held up that pledge. He’s made it 100% legal to straight up kill drug dealers without a trial. Both police and citizens are basically eliminating anyone they have a bad feeling about. And it’s totally legal. A few weeks ago I blogged about the Filipino women who are professional assassins. Barry has understandably had some choice words against this absurd policy and that sparked Duterte calling him a son of a whore and a son of a bitch.

Anyway, hilarious move to claim calling someone a son of a whore is not a personal insult… to say you regret that it “came across as a personal attack.” Literally what else could it possibly be? It’s not a professional insult. It’s not a compliment. You called the dude’s mom a whore. That’s fine cuz you’re a psycho and you got elected spewing pyscho rhetoric, but don’t call our leader the son of a whore then backtrack when he big times you on your meeting. You’re the fucking Philippines. You think Barry just gives out free meetings to 34th world countries floating around in the Pacific? No shot. And you think he’s going to hold that meeting when you call his mom a whore? Come on, Rodrigo. Petty insults have no place in our political sphere. No sir. Not in America. One couldn’t possibly get anywhere or have any success or gain any sizable, loyal following doing that kind of thing here. It’s embarrassing and America won’t stand for it. Act presidential for us one time.