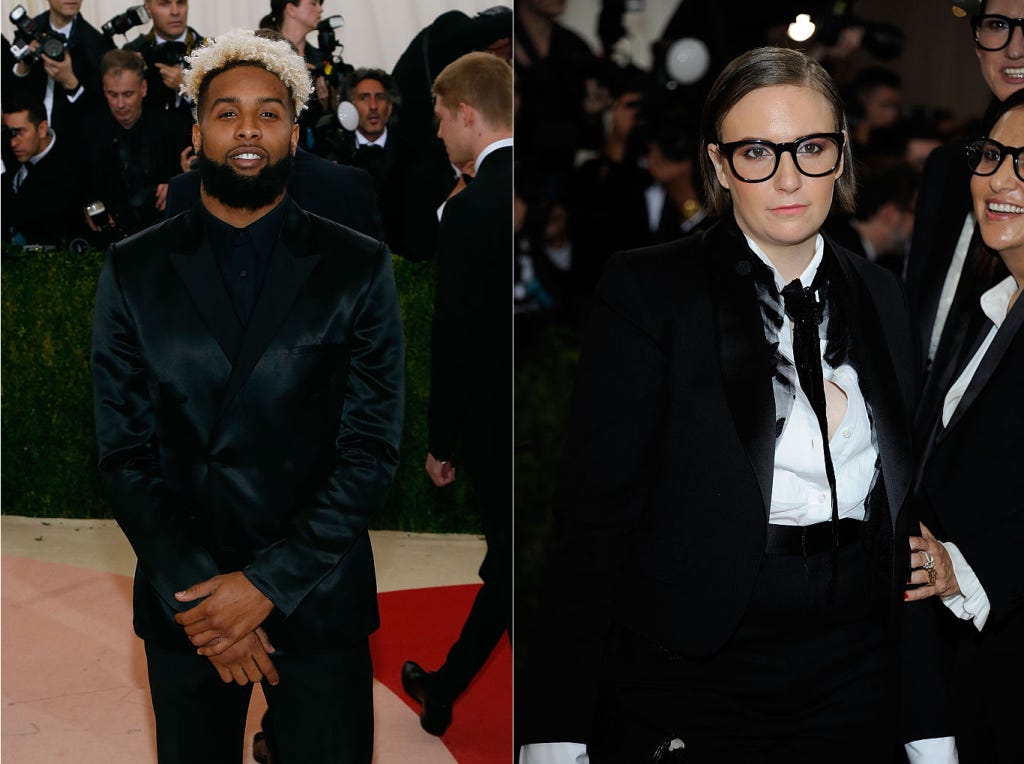 Daily Mail- Attracting the biggest stars of the year, the Met Gala is one of the hottest nights on the celebrity calendar. Yet landing the golden ticket doesn’t necessarily mean a great night out – not least because guests are seated according to a strict table plan. Lena Dunham opened up about her own experience placed next to Khloe Kardashian’s love interest Odell Beckham Jr at this year’s bash – admitting she couldn’t have been more miserable.

‘I was sitting next to Odell Beckham Jr., and it was so amazing because it was like he looked at me and he determined I was not the shape of a woman by his standards. ‘He was like, “That’s a marshmallow. That’s a child. That’s a dog.” It wasn’t mean — he just seemed confused.’ Talking to Amy Schumer, who she was interviewing for her Lenny Letters series, Lena said the sports star ignored her in favour of his phone.

‘The vibe was very much like, “Do I want to f*** it? Is it wearing a … yep, it’s wearing a tuxedo. I’m going to go back to my cell phone.” ‘It was like we were forced to be together, and he literally was scrolling Instagram rather than have to look at a woman in a bow tie. ‘I was like, “This should be called the Metropolitan Museum of Getting Rejected by Athletes.”

Look at the gall on this bag of fucking milk! I honestly don’t know what Lena Dunham expects out of Odell Beckham Jr. Did she want him to make small talk about how nobody knows or cares if her show is still on TV? Or maybe how can someone who has done so little be universally hated by the internet? Or he could have went with what he was thinking when he first sat down: “Who the fuck are you and how did you get invited to the Met Gala?” Because I’m pretty sure Lena wasn’t going to bring up the time she fingered her little sister as an ice breaker.

Of course Odell was on his phone the whole time. That’s what you do when you are sitting next to someone you don’t know or don’t want to talk to. Hell, I could be next to my best friend and I’m still on my phone half the time like an asshole. One of the best football players in the universe and most eligible bachelors in the city doesn’t give a fuck what some mouthy potato has to say just because HBO gave her a show a few years ago (again, if he even knew who she was).

And don’t give me that “It’s because I was a woman in a bow tie” garbage either. I think we can all agree that ODB isn’t going to turn down someone because they were wearing a bow tie. I’ll just leave it at that. You know who also looks like a marshmallow and dresses like a child? The person writing this blog. And I’m pretty sure I could at least get a word in with Odell in between swipes on his phone because I’m a normal person that isn’t always looking for attention or dressing like an asshole to make a statement. And if Odell didn’t acknowledge my existence, I wouldn’t give a flying fuck. Thinking someone should talk to you because they were forced to sit next to you is straight up loco.

In fact if we are being honest, whoever made that seating chart should be fired. How do you put an A+ celebrity like Odell Beckham next to a frumpy asshole that loves stirring shit up so she can stay relevant? It’s almost criminal. ODB should have been in the general vicinity of people like Beyonce and Jon Snow while Lena Dunham was sitting next to the bathroom or right in front of a speaker. I would rather watch that dude fuck a McChicken while he watched 2 Girls 1 Cup while they watched Allan Ray’s eyeball pop out of his head in the 2006 Big East Tournament on loop than spend one minute next to Lena Dunham. How much longer are we going to allow her to act like a celebrity when 90% of the world hates her? Fuck this chick, man.