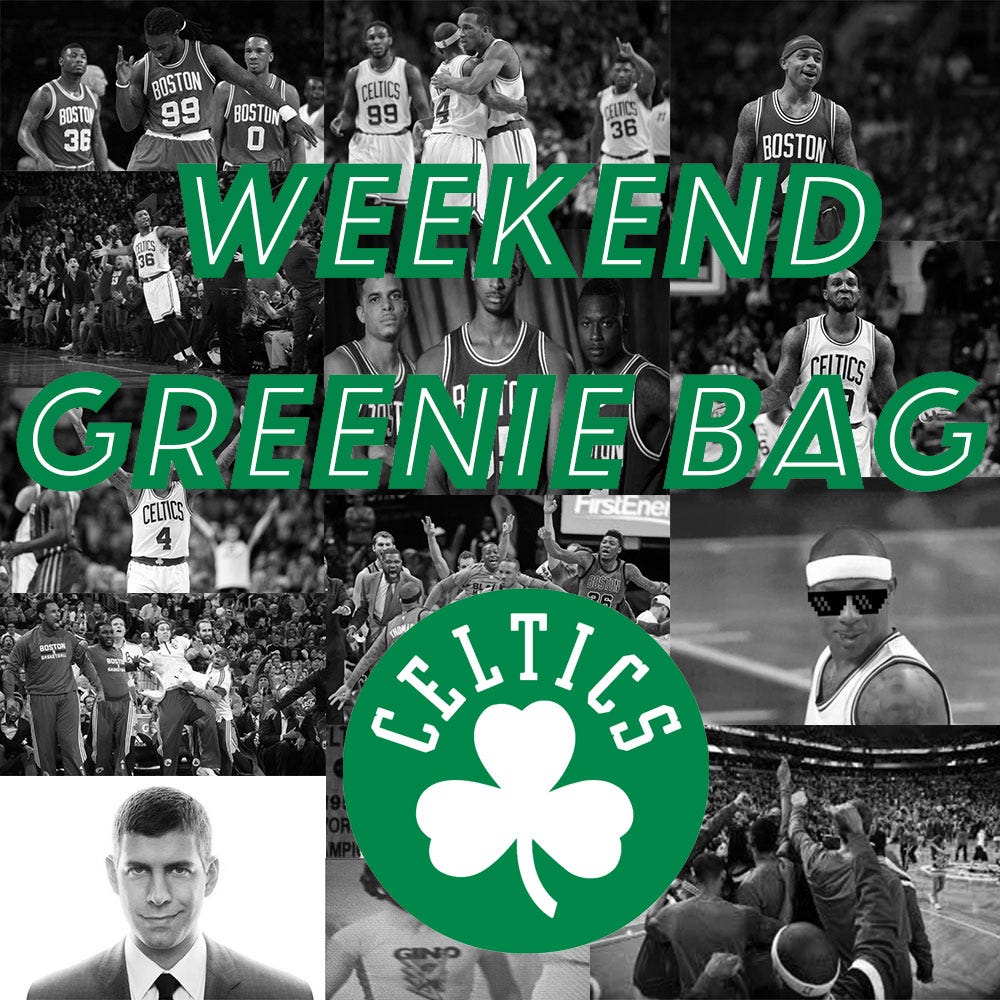 Hello there, and welcome back to another edition of the Weekend Greenie bag. By now this is probably your favorite Saturday tradition without you even realizing it, so even though its Labor Day weekend and I’m currently loving life in beautiful Arizona pretending I’m not 29, the Greenie bag never sleeps. After a slow start to the week, submissions were strong on Friday and as a reminder, you have a Celtics thought, your next move is to tweet it to me with #GreenieBag or email it to me at greenieceltsbag@gmail.com. It’s that simple. Step 1, thought. Step 2, tell Greenie.

Ronnie, you were not alone in wondering about a potential Celtics trade this season and it’s a fantastic question because I am a firm believer in the idea that it’s never too early to dream. Things get a little complicated with the ESPN trade machine and picks, so I’ll so you the trade and throw in the pick breakdown after. This should surprise no one, but was very hard to do on a personal level, here’s why 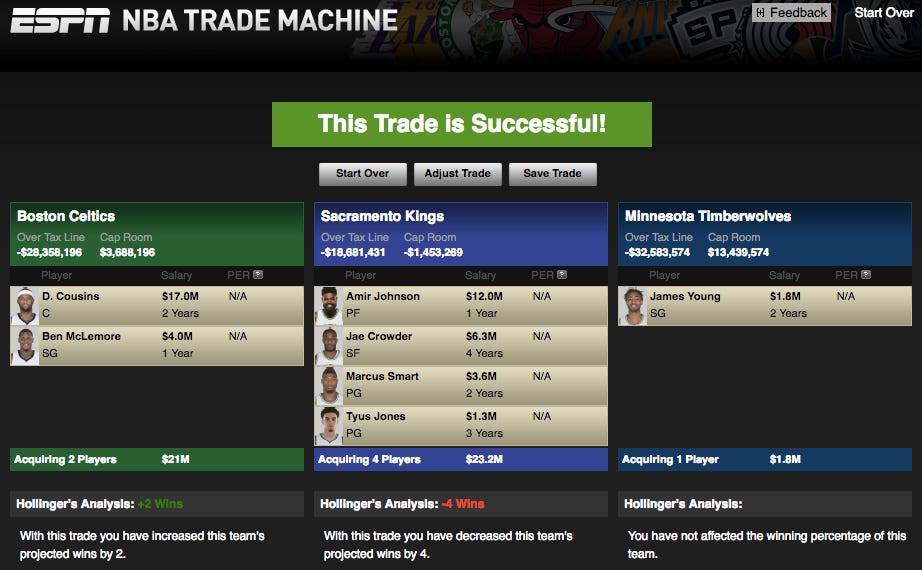 Is this trade realistic? No chance. If this trade gets brought up again at the deadline, or to start next year when SAC 100% knows Boogie is leaving? Then you might have something. Obviously it costs the Celtics a lot to acquire Boogie, but welcome to the world everybody. You have to pay for elite talent and in my opinion, a trade like this is why we acquired all these picks in the first place.

Oh, and James Young/KAT/Wiggins on the same team would dominate the NBA for decades. Fact not opinion.

Well Jonathan, it’s not as simple of a question as you may think. A lot goes into the frontcourt pairing, mostly matchups on what the opponent throws out, injuries, who’s playing well, all really vague shit like that which allows me to dodge your question. Having said that, long ago I talked myself into the front court pairing to start will be and should be Amir/Al. This lets Al play PF which allows him to play more in the high post which I am a fan of, and also gives you your best defensive frontcourt options who can also run the floor.

It all depends on what your own definition of “ideal” is. Is it which pairing is the best offensive unit? Because for me that’s Olynyk/Horford. Is it more when the Celtics go small a play Jae at the four, which is probably their best all around group of talent. It’s tough to say. In my scenario, if Tyler Zeller isn’t traded in December, you could very well see Jordan Mickey be the odd man out. I know that sounds crazy. I’m at a point where I’m not sure I can look past his summer performance. Over five Las Vegas Summer games Mickey averaged just 6.6 rebounds per game. That ranked 27th. Safe to say that is in no way encouraging. Now lets be fair, when you look at his Per 38s* from last year, they read 13/8. If that’s even close to a reality if Mickey actually gets minutes, it’s a huge win.

*ignore the fact that you often use Per 38 stats when you have no other material to make your point.

Email: Hey Dan – really enjoy your work. I live in Sweden (grew up in Rhody), so follow the Celts mostly through from you, Rainin Js and some of the other guys.

1) Is Brad Stevens such a good coach that he is messing up our ability to trade for a star? Basically, the assumption is that he is getting 100% of  players potential, so that they will not perform to the same level on a different team with a lesser coach? King of the opposite of the Cousins, “he will play better in  stable situation” hope.

2) Are we confident that Brad can develop young players? Especially in regards to shooting. Your boy #FreeJamesYoung is example #1, but RJ, Marcus, KO, etc haven’t really developed as much as we would have hoped. Maybe a new shooting coach should help??

Just to be clear, I think he’s the best coach we could ask for, so neither of these should actually be viewed as criticisms of him.

Keep up the good work – Jonathan

Nbd I just live in Sweden. Can’t imagine that sucks too much. Anyways, as always thank you Jonathan for your #pageviews and your loyal dedication. No idea what the time difference is from where I am to Sweden, but I hope they give you a good idea of what’s going on. You asked a two part question, so I’ll give you a two part answer.

1). I respect your general idea. Not a bad thing to throw out there and see if it sticks. Sadly though Jonathan, what you have just said is one of the most insanely idiotic things I have ever heard. At no point in your rambling, incoherent response were you even close to anything that could be considered a rational thought. Everyone in this room is now dumber for having listened to it. I award you no points, and may God have mercy on your soul.

In all seriousness, I don’t think there are GM’s who are ready to trade big time NBA talent and all the sudden pull out because they are afraid that player will regress once getting out of the hands of Brad Stevens. I think GMs haven’t traded a superstar for the Celtics mainly because their best trade chips are unknown commodities, and the known commodities that you would pair with it, haven’t showed they are worth blue chip talent (minus Isaiah) yet. That’s why this year is so important, and next summer even more so.

2) This is the question I really care about, and made me take a hard look at someone I follow blindly with my life. There is not a person on the planet who has any idea about basketball who will even dare say Brad Stevens isn’t a basketball genius. People are already saying he should get to coach Team USA after Pop. It’s not just hype, it’s true. His win total has improved each of his previous three seasons, going from complete and utter disaster, so basically a 3 seed if not for some bullshit tiebreaker nonsense that shouldn’t be a thing. That’s the angle most will use, but for me I care that they have gotten considerably better against teams over .500. From being -16 in his first year, to a +7 in his third shows me that there is real progression. They aren’t just beating the terrible teams. That’s impressive since he’s done it all with guys who are either super young, were throw aways from other teams, and Isaiah. As an underdog coach himself, he was able to form an identity of disrespect and playing the right way, and his players have responded. What gets lost in all that love fest, are some cold hard facts.

I’m still not sold on how they have handled some of their young players. Yes, my #FreeJamesYoung moment may be the reason I have a bad taste in my mouth, but Jonathan makes a really great point. James Young, RJ Hunter, Jordan Mickey, Sullinger, all were young players you could say haven’t “flourished”. To that, I say pump the breaks. I’m not going to call RJ Hunter a bust because he didn’t win ROY. Mickey hasn’t played. We all know my thoughts on James Young, it’s too early to tell either way. These kids haven’t played, mostly because unlike your common rebuilding team, the Celtics have had the luxury of rebuilding while still having a competitive roster. That’s good news for fans like us that like to see the team win, but rough on your stable of first round picks and young talent that you can’t give minutes to in an effort to even find out what they are. End of rant. 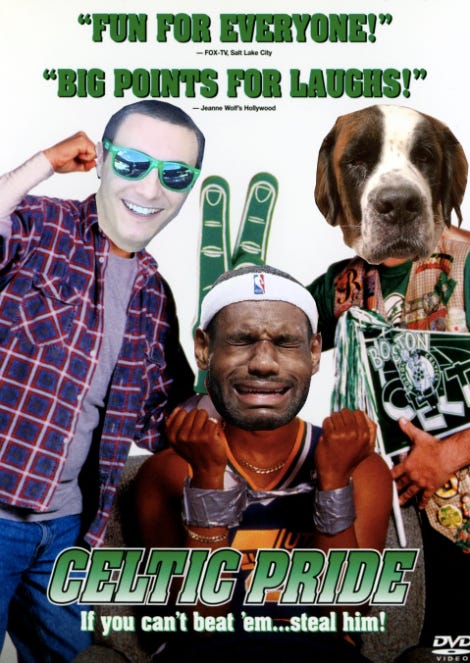 Email: Hey Greenie, loving the #GreenieBag and everything Celtics you do at Barstool. My question involves the Celtics making a blockbuster trade either at this deadline or before next year’s draft. If the Celtics are gearing up for someone huge, do you see anything untouchable with this team? Even if we get the number one pick and they’re getting something done on draft night? Thanks for all the Celtics insight and I can’t wait for this upcoming season.

I’m with you Ryan, I too cannot wait for this upcoming seeing. I won’t go crazy and repeat my brilliant plan to bring boogie to Boston, just scroll up a little bit and take a look. I’ll wait……..ok…..good? I’m putting my eggs firmly in the no deal probably happens this trade deadline, because their main targets like Boogie don’t really become a trade attraction until next year, but you never know what can happen with a teams season and who knows maybe someone blows it up.

Now for the part of your question where you ask if I think any of the players on the Celtics roster are untouchable. Sadly, that answer is no. Basically every player in the NBA is tradable if you aren’t named Steph Curry or Lebron, so for the right price I would pretty much move everyone on the roster. Even Isaiah. Again it all depends on the price. Part of Trader Danny’s job is to look at things for both the long term and immediate future, so if he finds something that satisfies those requirements, he makes the move.

And that should do it for this Labor Day Weekend Greenie Bag, congratulations on a great way to start your day. Thank you of course to those who wrote in, for next week don’t be shy send in your takes. We’re a quick 52 days from a date with Brooklyn and camp will be here in a blink of an eye. Until next Saturday, have a fantastic long weekend