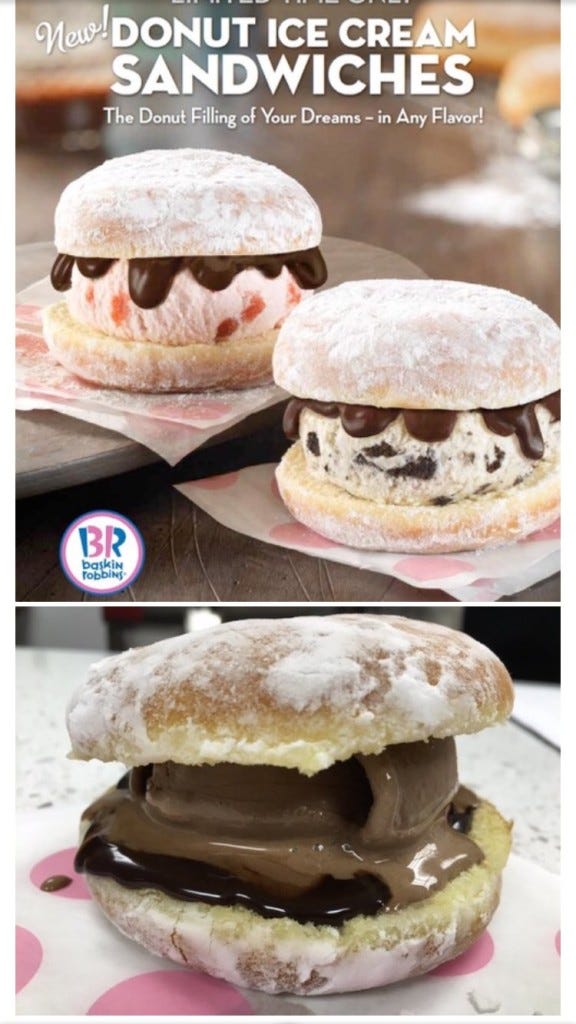 Food Beast- Baskin-Robbins just announced that they’ll be adding Donut Ice Cream Sandwiches to their menu. The ice cream chain gave us the scoop, all puns intended, on their new line of customizable desserts created in collaboration with Dunkin’ Donuts.

On September 1st, the day the donut dessert sandwiches are released, customers will be able to customize their own donut sandwiches with the breakfast cakes made by Baskin-Robbins’ donut-slinging sister brand. You have your choice of all the flavors Baskin-Robbins offers sandwiched between a powdered donut from Dunkin’ and topped with any of the toppings the ice cream chain offers. This includes hot fudge, caramel, marshmallow, and strawberries.

This is one of those ideas that I love in theory but am completely meh about when it becomes reality. I personally dislike most of the food at Dunkin Donuts. In fact I think most of it is trash. Don’t get me wrong, I’m obviously not gonna turn down a powdered jelly or glazed chocolate if anyone brings donuts into the office. But if I had to choose between Dunkin Donuts or donuts from Krispy Kreme or Entenmann’s, I’m picking against Dunkin Donuts almost every single time.

And I think the only time anyone gets ice cream at a Baskin Robbins is if there isn’t a Carvel within driving distance. Fudgie The Whale and Cookie Puss curb stomp anything Baskin Robbins has to offer. Same with Cold Stone. Plus I would imagine that you can only buy these donut sandwiches at those hybrid stores that have both a Dunkin Donuts and Basking Robbins inside, which always seem bootleg as fuck.

But I suppose a crappy donut and average ice cream could help these two chains make some cash. I’m all for a little bit of synergy in the name of spiking my insulin level. This would definitely be one of those “the sum is greater than its parts” things. But that’s fine. Especially if they make up some sort of a secret menu because who doesn’t love secret menus at restaurants? I don’t know what kind of mashup flavors you can make because I don’t have the brain for that type of stuff. But I do know that the only time I mess with Jelly Belly jellybeans is when I can combine flavors like some sort of mad scientist. Maybe Dunkin Donuts and Baskin Robbins aren’t total trash after all.

(Just kidding, they both stink unless you can get a free Dunkin iced coffee the day after your NFL team wins a game)