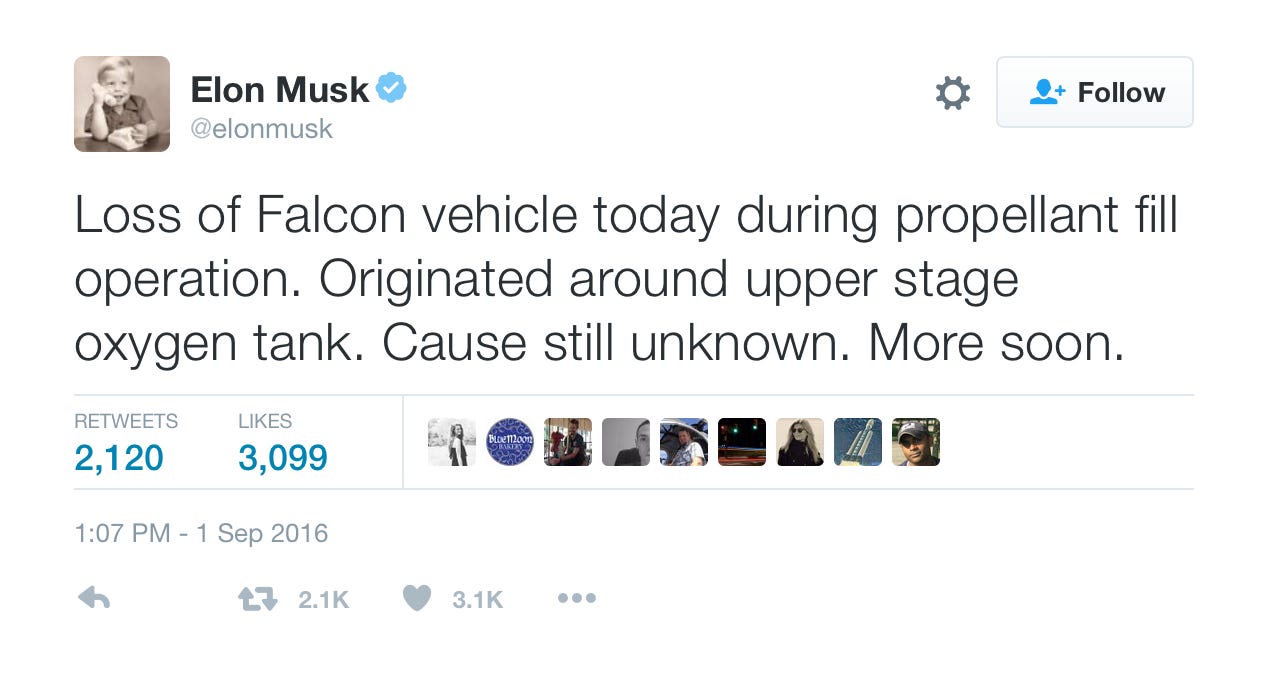 CNNM- A SpaceX rocket exploded at its Cape Canaveral launch pad Thursday morning, destroying the rocket and the satellite it was due to launch on Saturday. SpaceX said there were no injuries as a result of the explosion, which it described as an “anomaly.” SpaceX CEO Elon Musk tweeted that the explosion happened while the rocket was being fueled, but that the cause of the blast is still unknown. The rocket was carrying a private satellite that was to be launched in a partnership between Facebook (FB, Tech30) and French satellite firm Eutelsat Communications to bring internet access to Africa, the Middle East, and Europe. The satellite, called Amos 6, was owned by Israeli company Spacecom, which contracted with SpaceX to carry it into orbit.

I like watching Elon Musk fail. It brings me joy for some reason. I know almost nothing about him other than people call him the real life Iron Man which is pretty absurd. So when his rocket blows up I get a real kick out of it. This time around it’s even better because Mark Zuckerberg’s 200 million dollar satellite was on the rocket and now it’s just gone. Blown to pieces. I guess you could say I like it whenever any billionaire fails. So this story is like a double dip. Proof that even the most high-functioning people amongst us still fuck things up from time to time. And how about that passive aggressive Facebook post from Zuckerberg? Yeesh. Very girl-who-just-got-broken-up-with-but-has-found-the-energy-to-somehow-push-forward. “As I’m here in Africa” might as well say “As I sit here and reflect on my life and think about starting a new chapter” like the countless posts you see from girls you went to high school with who suck at one thing after the next. I look forward to Zuckerberg finding a sexy rebound rocket and posting pictures with it along with captions like “Love my life. So happy I found you babe”