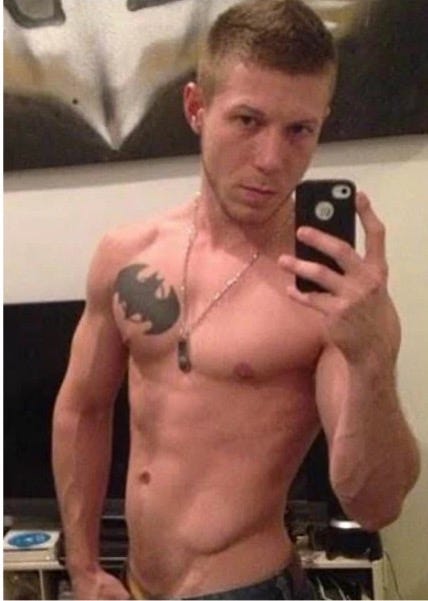 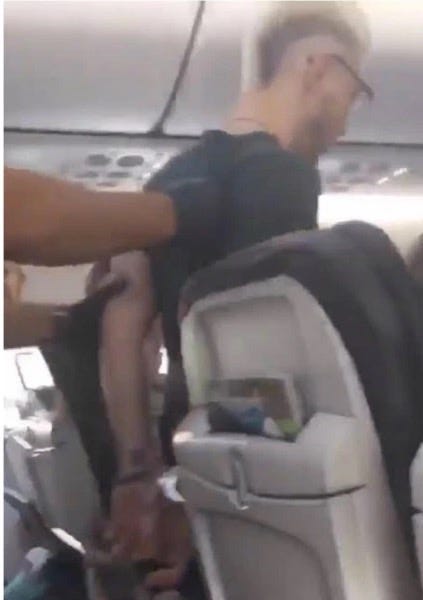 NY Post – A buff barber from Hell’s Kitchen went berserk while high on drugs during a flight from JFK to Seattle and had to be restrained when he tried to open an emergency exit, officials said.

Jordan Fragiacomo, 28, tried to open a rear exit door on an Alaska Airlines flight Monday after babbling incoherently and attempting to kiss two flight attendants, according to a police report.

“If you continue to restrain me, there’s going to be problems,” Fragiacomo said at one point.

He also admitted to authorities that he had ingested the date-rape drug GHB, in addition to unknown amounts of cocaine and Xanax, three hours before the flight.

Exactly what I was talking about on the Rundown re: Yoga Chick. Sure it’s a little annoying to look over your shoulder and see a woman throwing her ankles over her ears and going downward facing dog on aisle seat 12C…

…but when you think of all the possible shit you could deal with on a flight, does that even rank? Something like, for example – a dude roofie’ing himself with GHB, blowing coke and taking Xanny bars to the face, then forcing an emergency landing because he started fights with all the passengers and tried to forcibly make out with all the flight attendants.

During the flight, Fragiacomo began grabbing passengers’ headphones and drinks, the ­report said.

A witness said that it was ­“obvious he was under the influence of something” and that he was speaking nonsensically.

Fragiacomo then tried to smooch a flight attendant before deciding he wanted to “get off the flight” and bolted toward the back door.

Several flight attendants and two off-duty pilots were able to finally restrain him, but not before he grabbed a second attendant and once again tried to plant a kiss on her.

The plane went into lockdown mode to secure the cockpit while they kept Fragiacomo restrained.

The jet was forced to make an emergency landing at Minneapolis-St. Paul International Airport at 9:45 a.m. Monday local time.

Traveling is already the most stressful experience in the world, any little problem at the airport or delay with your flight can ruin your whole trip. A guy making your plane divert to fucking Minneapolis? Because he date rape drugged himself and tried to jump out of the emergency door at 30,000 feet? Skip the trial, grounds for immediate execution IMHO.

To his credit, this part was pretty funny.

When asked for identification, Fragiacomo referred authorities to a website that shows him shirtless and offers his clients a hot shave “in the privacy of your own home.”

Ok we just did and you’re an even bigger fucking weirdo than we thought, come with us creep.