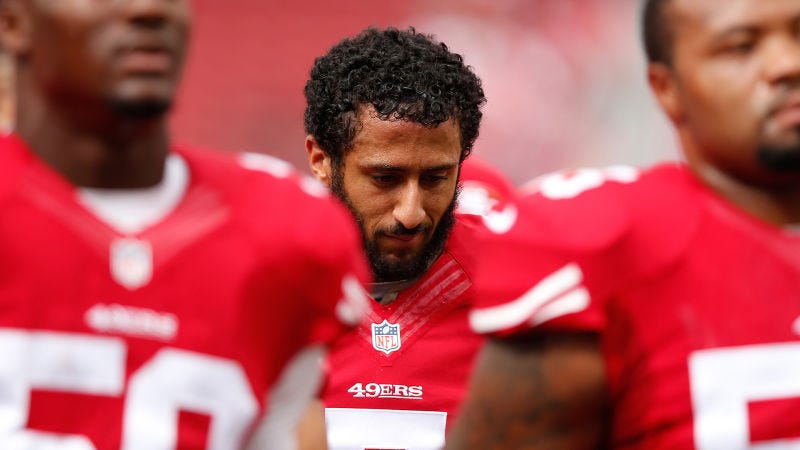 SANTA CLARA, Ca. — Forty Niners quarterback Colin Kaepernick has willingly and knowingly immersed himself into controversy by refusing to stand for the playing of the national anthem in protest of what he deems are wrongdoings against African Americans and minorities in the United States.

His latest refusal to stand for the anthem — he has done this in at least one other preseason game — came before the 49ers preseason loss to Green Bay at Levi’s Stadium.

“I am not going to stand up to show pride in a flag for a country that oppresses Black people and people of color,” Kaepernick told NFL Media in an exclusive interview after the game against Green Bay. “To me, this is bigger than football and it would be selfish on my part to look the other way. There are bodies in the street and people getting paid leave and getting away with murder.”

The 49ers issued this statement: “The national anthem is and always will be a special part of the pre-game ceremony. It is an opportunity to honor our country and reflect on the great liberties we are afforded as its citizens. In respecting such American principles as freedom of religion and freedom of expression, we recognize the right of an individual to choose and participate, or not, in our celebration of the national anthem.”

For much of my adult life, what Colin Kaepernick did last night in refusing to stand for the National Anthem would have really bothered me. It would have bothered me that someone could live in this country and disrespect the flag and the anthem so brazenly.

I love the flag and the National Anthem. I love what they represent. To me, the flag represents an idealism that is firmly grounded in freedom and liberty. Freedom and liberty don’t always mean the same thing to all people. I’m not a black man so I don’t know how a black man like Colin Kaepernick feels with the current and past political climates. I’m glad that he voiced his opinion through both passive and verbal means despite the fact that I dont like the method that he used.

Someone asked me on twitter what I would do if I saw a person refusing to stand for the National Anthem. Well, here’s my answer. I wouldn’t do anything. How someone feels about the United States, flag, and anthem is really none of my business. I’m of the opinion people should be able to do whatever the fuck they want as long as it doesn’t inflict harm on someone else. Colin Kaepernick got what he wanted out of not standing for the anthem. He was able to verbalize his displeasure with current policies and situations surrounding the communities where he’s from. I support that. I’m ok with people protesting or refusing to stand because real liberty and freedom demand that right.

Patriotism and nationalism don’t always have to fit inside one box. It doesn’t always have to be screaming Toby Keith and chuggin bud light limes. It can be thoughtful, deliberate, and passionate protesting against the tyranny that you perceive. Expressing rage in the face of your government despite the populace’s majority opinion is as American as it gets, uncomfortable and tasteless as that rage might superficially appear to the majority.

Do I like it when people refuse to stand for the anthem? No. No, I don’t. But, I’m sure as fuck glad that people defend that right as well. Stand. Dont stand. This too they’ll defend.