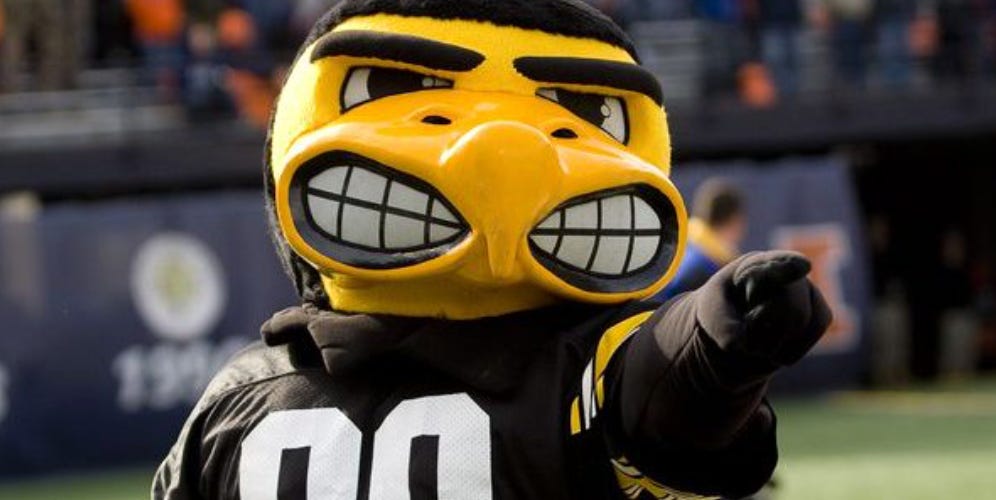 Press Citizen- A University of Iowa professor is asking for the Department of Athletics to allow the university’s mascot, Herky the Hawk, to display a wider array of facial expressions in university publications. “I believe incoming students should be met with welcoming, nurturing, calm, accepting and happy messages,” Resmiye Oral, a clinical professor of pediatrics at UI, wrote recently in an email to UI athletic department officials. “And our campus community is doing a great job in that regard when it comes to words. However, Herky’s angry, to say the least, faces conveying an invitation to aggressivity and even violence are not compatible with the verbal messages that we try to convey to and instill in our students and campus community.” The email was included in a message Oral sent Tuesday morning to other members of the UI Faculty Senate, where she is one of the representatives from the UI Carver College of Medicine. In a phone interview Tuesday, Oral said she has been concerned for some time with the lack of emotional variety displayed in the images of the university’s long-standing mascot — specifically the Fighting Herky, the “Old School” Flying Herky and the Tigerhawk logo developed by retired Hawkeye coach Hayden Fry.

“As we strive to tackle depression, suicide, violence, and behavioral challenges and help our students succeed, I plead with you to allow Herky to be like one of us, sometimes sad, sometimes happy, sometimes angry, sometimes concentrated,” she wrote.

Get out. Get the fuck out. What is this professor even talking about? Are we sure she didn’t mean to send that e-mail to The Onion and not the athletics department? Cause otherwise that’s some serious new age hippie shit right there. It’s a mascot! It runs outta the tunnel with the football team and waves an Iowa flag around. That’s it. He’s supposed to look intimidating and scary. That’s what mascots do. That’s why mascots are always tigers or lions or bears or knights and not puppies or pillows. Herky the Hawk isn’t all that intimidating so they gotta throw a grimace on him. End of story. I would actually argue that wanting a mascot to express more feelings through facial expressions is psychotic behavior. That professor needs to take a mental health test.

Also, does this professor really think there are high school seniors out there being like, “Hmmm where should I go to college? Let’s see. I like Iowa a lot. Beautiful campus. Good academics. Great party school.  Ohhhhhhh but you know what. Their mascot is a little too scary-looking. I need him to smile more. Next.” I doubt it. And if they are, they’re the biggest losers in the world and we don’t want them in the state of Iowa anyway.