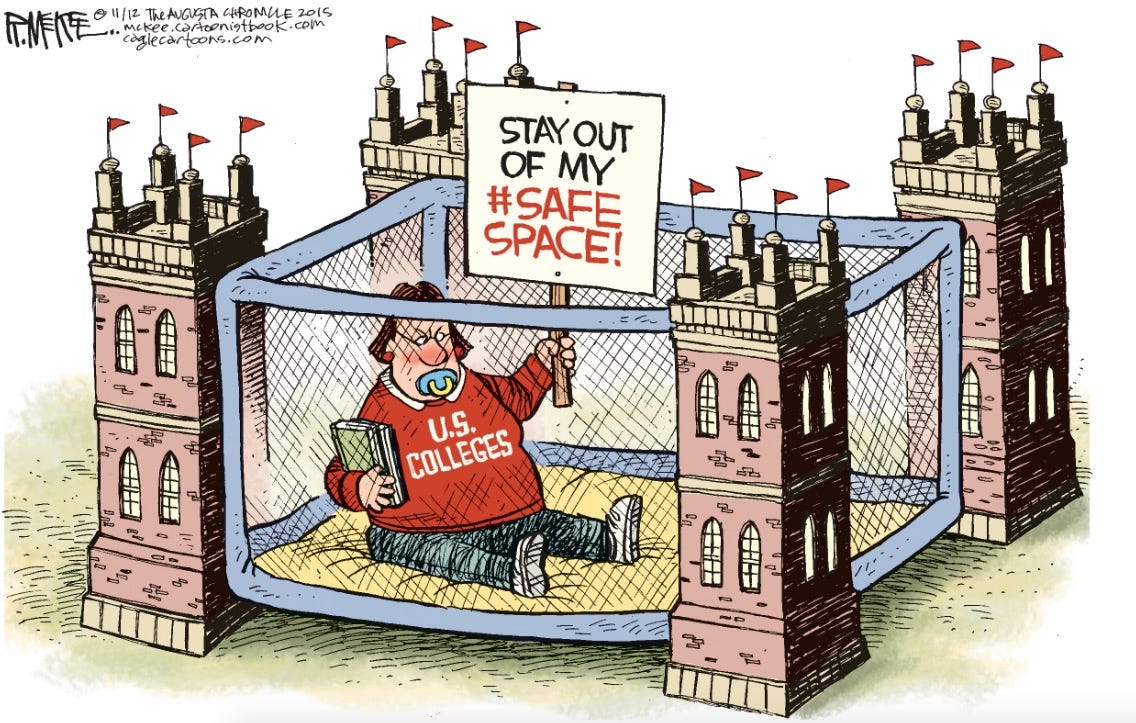 Intellectual Takeout - Academics around the country are embracing the relatively new trend of using trigger warnings to shield students from ideas that might be discomforting or trauma-inducing. These ideas often include topics that touch on “racism, classism, sexism, heterosexism, cissexism, ableism, and other issues of privilege and oppression.”

Similarly, many universities are creating “safe spaces” where students can relax free from ideas that might be stressful or anxiety-inducing. Among these is Brown University, which last year created a room “with cookies, coloring books, bubbles, Play-Doh, calming music, pillows, blankets and a video of frolicking puppies” because a debate on sexual assault was taking place on campus.

Others universities have canceled “controversial” speakers—Condoleezza Rice, George Will, Jason Riley, and Michelle Malkin, among them—under pressure from faculty or students.

Apparently not all universities are on board with this trend.

The University of Chicago recently made it clear to its crop of incoming students that academic freedom and inquiry remain pillars at the institution, and that the university does not support “so-called” trigger warnings or offer safe spaces that allow students “to retreat from ideas and perspectives at odds with their own. Here is how the university welcomed its incoming class of 2020: 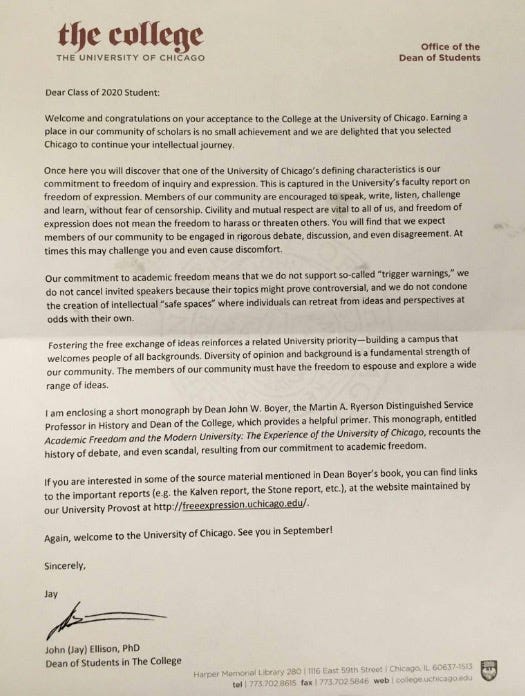 Welcome and congratulations on your acceptance to the college at the University of Chicago. Earning a place in our community of scholars is no small achievement and we are delighted that you selected Chicago to continue your intellectual journey.

Once here you will discover that one of the University of Chicago’s defining characteristics is our commitment to freedom of inquiry and expression. … Members of our community are encouraged to speak, write, listen, challenge, and learn, without fear of censorship. Civility and mutual respect are vital to all of us, and freedom of expression does not mean the freedom to harass or threaten others. You will find that we expect members of our community to be engaged in rigorous debate, discussion, and even disagreement. At times this may challenge you and even cause discomfort.

Our commitment to academic freedom means that we do not support so called ‘trigger warnings,’ we do not cancel invited speakers because their topics might prove controversial, and we do not condone the creation of intellectual ‘safe spaces’ where individuals can retreat from ideas and perspectives at odds with their own.

2015-2016: the years of the Safe Space. A trend that we saw explode from campus to campus across the country – college kids wrapping themselves up in a bubble demanding that no opinions they disagree with be allowed in, administrations bending over backwards to help protect them from any world view that might upset them. Canceling concerts, banning well respected speakers, investigating everything from cafeteria food to sidewalk chalk if there was even the possibility it offended one person. Ideas and arguments and platforms from a different political party were no longer points of debate – they were “trigger warnings” that had to be eliminated.

Here’s just a brief list of some of the stuff we’ve covered, to jog your memory:

Those were just the ones in my first two pages of search.

And along the way you had a (very small) group of people telling them to cut it out. To quit it with the safe space nonsense. Begging colleges to remember they are supposed to be a place for healthy debate and academic discourse, not coddling and censorship. President Obama in one of my favorite speeches of his presidency. Bloomberg during his Michigan commencement speech. An Oklahoma college president’s open letter saying “this is not a day care. It’s a University.”

But now we have my favorite one yet by far. University of Chicago taking the initiative and preemptively emailing all incoming students. Warning them if they come their safe spaces and trigger warnings won’t be recognized. That if a speaker from a different political party with ideas you disagree with comes to campus, they won’t be turned away at the gate because you sat in a hallway holding a sign – you’ll either have to stand up for your own beliefs and fight them with arguments and debate, or go do something else and ignore them.

Maybe this is the tipping point to going back to normal and Making College Great Again. I doubt it, but maybe!