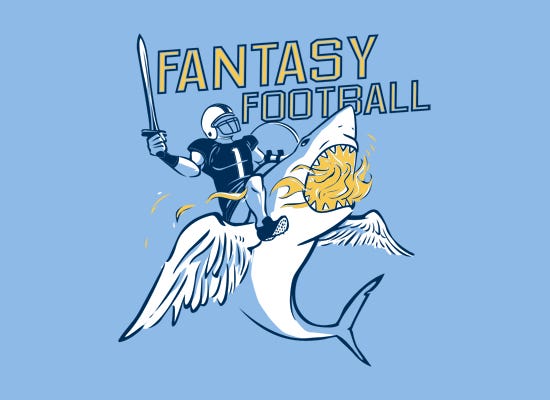 FF – The NFL’s popularity is going to cost your boss this season. Fantasy players are expected to use one hour per week updating their rosters, making trades and checking injury reports at work. As a result, the projected 56.8 million Americans and Canadians who will play fantasy football could cost their employers as much as $16 billion in lost wages, according to an estimate from consulting firm Challenger, Gray & Christmas. CEO John A. Challenger acknowledged that the true measure of fantasy football’s impact on the bottom line is hard to predict. “However, one cannot dismiss the idea that fantasy football is not wildly popular or deny that it has crept its way into the workplace,” Challenger said in a statement. Based on the latest data from the Fantasy Sports Trade Association, participation in fantasy football has soared 350% versus the 12.6 million people that played in 2005. An estimated 66% of this season’s players, or 37.5 million, are employed full-time.

And people should be surprised? Cube monkeys do anything and everything to get through the day without actually doing work. There’s only so many times you can doodle at your desk or phone into the Call & Oates hotline and pretend like you’re locking down a sale. Taking a shit on the clock more than twice a shift has become a damn national pastime, but not even the strongest of men can withstand the corporate bathroom in the afternoon. Those stalls have been bombed more than London in the ’40’s. That’s where Fantasy Football comes in to fill the seasonal gap. So I’m not gonna lie, I thought that number would be a lot higher. Like a couple trillion. There are guys in FF leagues who write novels every day. They make up tall tales and poems of how Jamaal Charles is going to smite your wife just to escape the drudgery of reality for a couple of hours. These Pulitzer worthy feats aren’t created at home. They’re done on the clock. Even the casual Fantasy Football player takes time out of their day to curse out absolute nobody’s like Justin Hunter or Lance Moore for being outright inactive bums. The League could legitimately be a documentary at this point.

*Call and Oates. A cube dwelling master’s sweet Gospel music. Good for a break every hour or so.