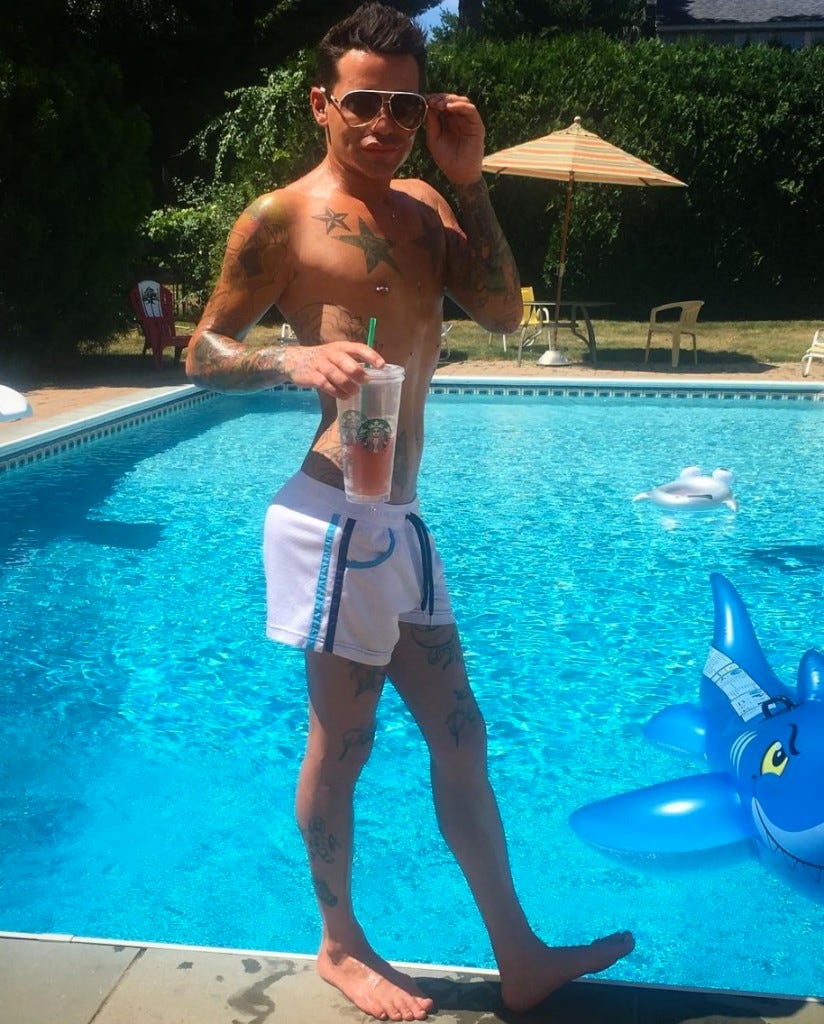 Daily Mail – Joey Prixx, a 26-year-old piercing artist from Boston, had the biggest implants possible for his tiny frame – an operation which meant he couldn’t sit down for six weeks.

‘They feel like two huge water balloons, it feels really cool sitting down now,’ says Mr Prixx, who has spent more than $60,000 on surgery thus far.

So far he’s had 100 cosmetic procedures, the most recent being his bum implants which tripled the size of his derriere.

Mr Prixx adds: ‘I’ve wanted them for such a long time and worked really hard to get them so I couldn’t be happier.

‘What can I say? My motto is “plastic is fantastic”. I’m now saving up for another nose job to improve my bridge and I’d like to double the size of my bum implants.’

Over the past five years Mr Prixx has forked more than $60,000 on two nose jobs, silicone bum implants and sweat gland removal; as well as Botox on his forehead, eyebrows, eyes, nose and chin and fillers for his lips and cheekbones.

Listen you clicked this headline, I’m writing this blog because it’s going viral, we’re gonna embrace our intellectual curiosity and look at this dude’s butt. NSFW: 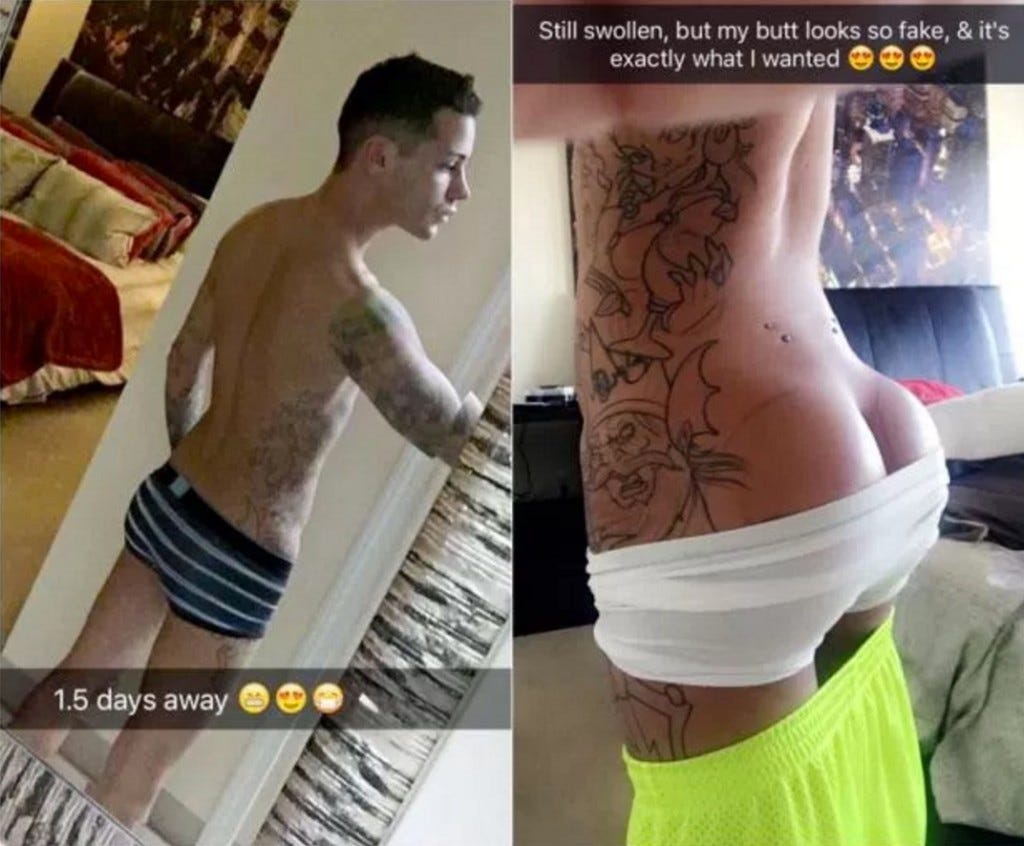 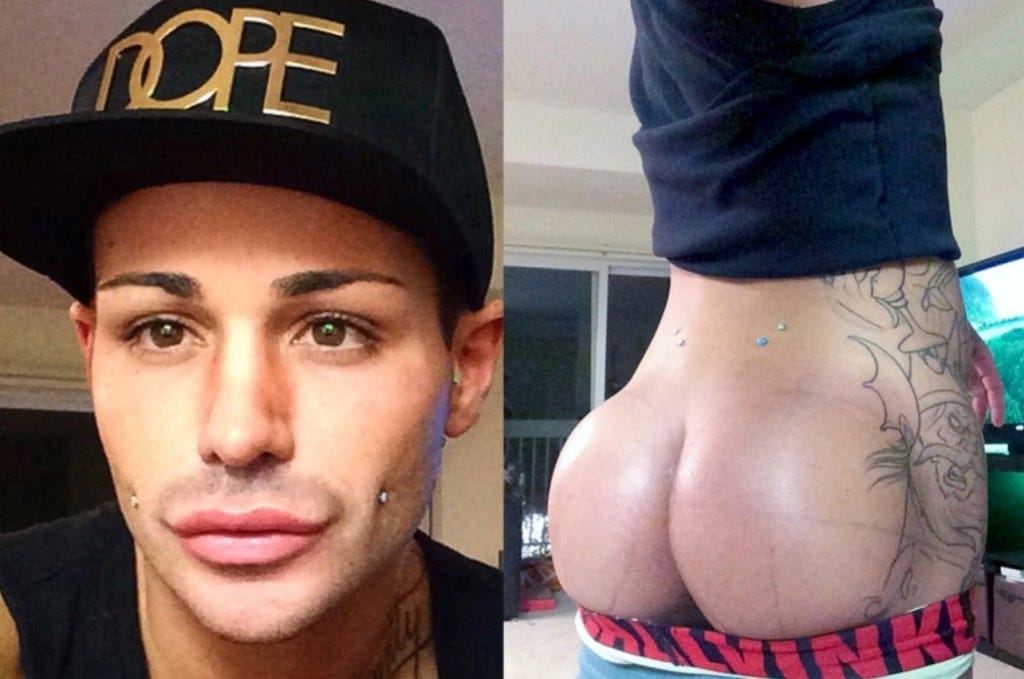 Right off the bat I will say that I would not define that as a perfect butt based on my personal world views. HOWEVER! If this guy Joey Prixx (this may be a pseudonym, call it a hunch) thinks he’s achieving perfection, then that’s what really matters. If you’ve got that much money to blow, more power to you on how you choose to use it. He didn’t invest in a home or stocks, he invested in himself. Plus you know he’s picking up all sorts of ass (or sweet dick one may assume) in the process with this vibe he’s got going. So with all of these positives working on his behalf entirely thanks to these surgeries, maybe it is perfection. Beauty is in the brown eye of the beholder.

I do have a question in general though: What’s the deal with fake butts? Like I keep hearing “Oh so and so celebrity has a fake butt” “This Insta ho definitely has a fake butt” but I can’t say I’ve ever been within range of one in real life. Are they that common? Do they all look this hilariously bulbous or are there ones that are more tasteful, same as how boob jobs are? Seems like the fake butt lobby should put more information out there so we’re all aware, a lot of anti-fake butt propaganda has been going on.

Also the one thing I will say this guy did that’s genius is he apparently got his sweat glands removed under his arm pits. With this heatwave in NYC lately and how bad I am at dealing with humidity, I’ve been literally turning to mush the second I step outside to the point where it’s fucking shameful. I’m sure removing sweat glands probably poisons your body with things you’re supposed to expel but whatever man, small sacrifice to not feel like you’re a 300-pound man in a sauna. Props to this dude for living the sweatless dream.