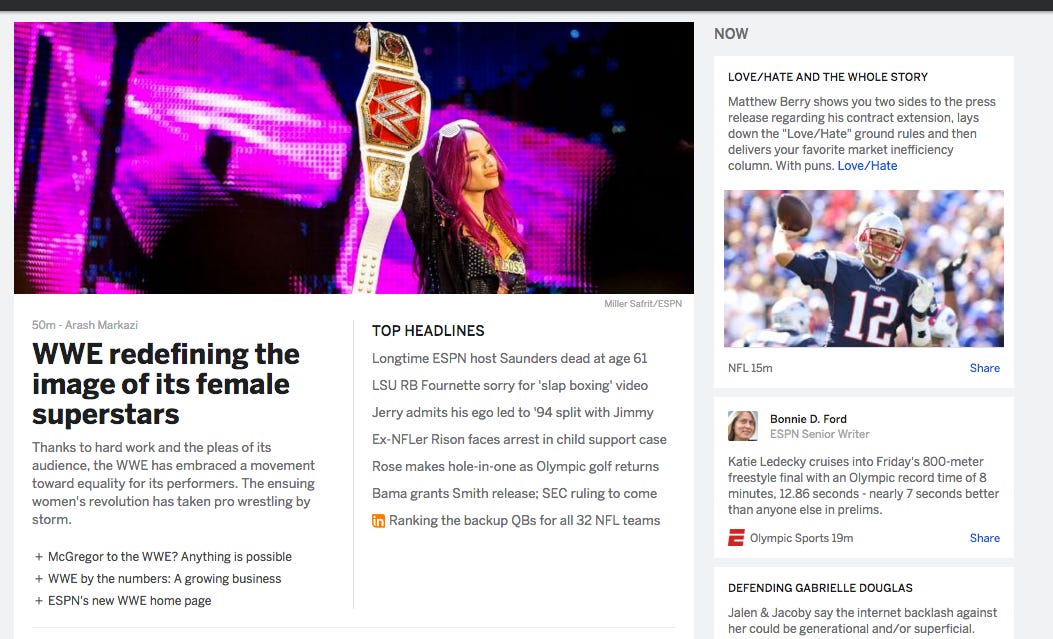 Love ESPN or hate ESPN, there’s no denying the world wide leader is the biggest name in sports media. Though not on the same level as a decade or so ago due to the way they have watered down their product with the likes of Stephen A Smith and the “hot take” culture which feeds the lowest common denominator, EPSN is still a powerhouse.

Last year, they started a weekly segment hosted by former WWE personality and current ESPN anchor Jonathan Coachman called “Off The Tope Rope”, which was their first real venture into adding WWE into ESPN programming.

There are, of course, people who hate it, who yell things like “THAT AIN’T SPORTS!” and “DON’T YOU KNOW IT’S FAKE!” when it comes to WWE. The responses to those two statements are 1) the E in ESPN stands for entertainment, which is also what the E in WWE stands for as well. And 2) Yes, this isn’t 1984 anymore, everyone knows the outcomes are predetermined. But combining the athleticism of sports with the entertainment factor of television is why WWE has maintained it’s popularity for so long.

Which leads us to today, when all of the above mashed together and ESPN launched it’s WWE vertical, with Sasha Banks headlining the front page of the website. It’s no small achievement for WWE to come this far into the mainstream, and it’s top female wrestler leading the way. Now, if you’re not a regular reader of my WWE blogs, you should know I’m a huge Sasha guy, as is pretty much anyone who has seen her wrestle. Her, Paige, Bayley, Charlotte, Becky, and others are the reason WWE has stopped calling their women “Divas” and now call them the same as the men, “superstars” (and occasionally wrestlers as well).

They could have used Brock Lesnar, they could have used Roman Reigns or Seth Rollins, but instead they have Sasha. With the Olympics going on and the first NFL preseason games today, Sasha Banks is at the top of ESPN.com. Pretty big step for WWE, wrestling, and women’s wrestling to boot.

PS: If you’re new to wrestling, not a fan, or just somewhere in between, I’d behoove you to find a way to watch the Sasha vs Bayley match from NXT Takeover Brooklyn. The video package before it leading into the 10/10, 5 star match is one of the best you’ll ever see and you’ll fully understand this entire blog.