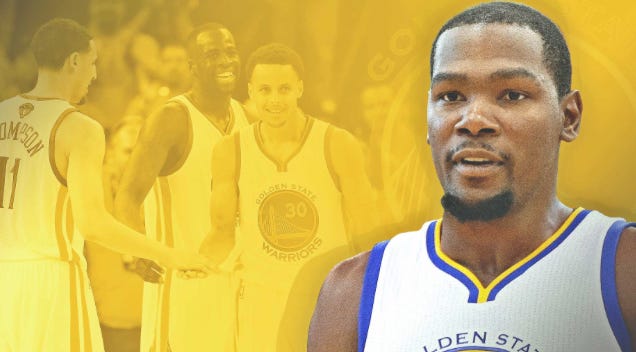 (Source) Durant always appeared to be the perfect fit with Oklahoma City, with his humble nature and down-home demeanor. But he also was drawn to a bigger city, not necessarily for the brighter lights, but for the ability to blend. In Oklahoma City, Durant carried a larger-than-life burden everywhere he went. He’d privately lamented to friends an inability to be in public. Westbrook’s ideal night off the floor, though? At home with his wife, Nina, watching anything other than basketball. That’s a fit with Oklahoma City.

You know what, fuck Kevin Durant. I’m so sick of this dude. I don’t even care that he chose Golden State, I said it at the time that it was his right and he should do whatever he wants. But time and time again it feels like Kevin Durant complains about being a millionaire professional athlete. He had temper tantrums with the OKC media, he doesn’t want to be recognized, he wants to just be normal and be left alone. Fuck out of here man. No one has had it better than Kevin Durant. Lebron went 9 years before he won his first title and he got murdered for it. KD just finished his 9th season and no one says shit. He has gotten the ultimate pass. He’s one of the top 3 players in the league and people barely call him out for not winning a thing. Then he turns around and says the media is unfair to him and he just wants to be left alone. I can not wait for this season, for the expectations that will be on the Warriors. I know Steph and Klay can handle it, but this is a different beast for Durant. No more small town media, no more getting a pass, no more bullying reporters and getting pouty in press conferences. Can’t wait for Durant to realize he’s been treated with kiddie gloves for the past 9 seasons. Every other superstar in the NBA gets scorn except KD. Lebron, Dwight Howard, Kobe, Chris Paul, even Steph gets it now. Guy thinks people were too much in OKC, ha! Bout to get so much worse.