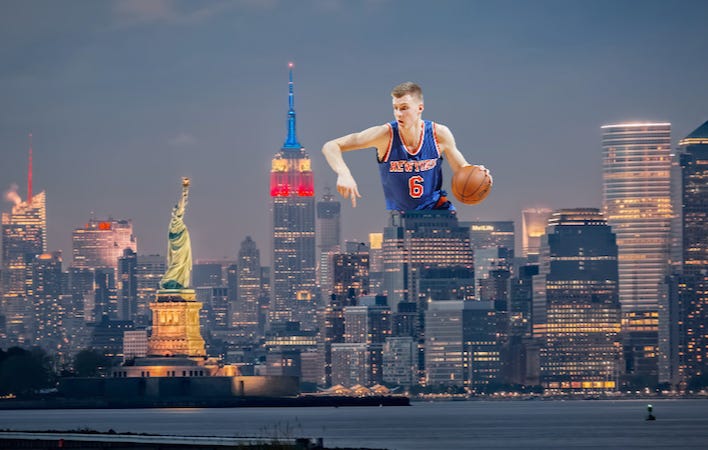 NY Post- It’s a basketball brotherhood troika. Latvian-born NBA star player Kristaps Porzingis just scored a new pad in Midtown West. The 7-foot-3-inch player has leased a corner penthouse that was asking $8,000 a month at Sky, the mammoth rental tower at 605 W. 42nd St. He also nabbed another two high-floor units for his two brothers, Martins and Janis, because “they are close and like to be near each other,” a source said. Thankfully, the units have high ceilings. They also have access to a Carmelo Anthony-designed, NBA regulation-sized basketball court. “It’s part of the 70,000-square-foot Life Time Athletic at Sky, a fitness club open to residents and non residents.” The 71-story building’s amenities include a gym, spa, children’s playroom, billiards lounge and cafe and three pools. Porzingis’ units have city skyline and river views, floor-to-ceiling windows, chef’s kitchen and spa-like bathrooms.

Press play and listen for the premium blog experience. Oh yeah, and just say “Westside” whenever the song says “Eastside”

Now does it worry me that Young Kristaps is going from a handful of dimes in White Plains to the Federal Reserve of smokeshows in Manhattan? Of course it does. Do I think every morning a different girl will be walking funny as she leaves the corner penthouse at Sky? No doubt. Does Rihanna finally get the pipe now that Krisaps rests his head in a Manhattan zip code? Perhaps (Even if the thought of what she would do to him terrifies me). But that’s why Janis and Martins are there. To keep both of Kristaps’ heads where they’re supposed to be. And when push comes to shove, I’m just happy this tweet wasn’t a mistakenly leaked trade announcement.

Also lets not gloss over Kristaps having access to one of Melo’s basketball courts. Ball is going to be soooooooo fucking life for Melo and Porzingis as they help Knicks mesh into a super team right in front of our eyes. And don’t think I didn’t notice the fitness club being “open to residents and non residents.” The Mega Bus is fueled up and ready to make his triumphant return to the inside of a gym.

Lots of best friends meet for the first time at a gym, right? Isn’t that how Jerry and Keith Hernandez met on Seinfeld?

P.S. I’m going to have “Moving On Up” in my head for the rest of the weekend. Even after all these years it still bangs.
Follow @TheClemReport