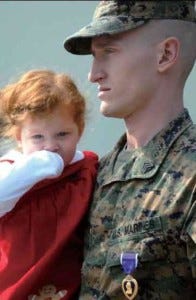 July 31st of 2007 is the single most memorable day of my life. I remember everything about that day. I’ve gone over it thousands of times. Many of ya’ll might remember that day as the day that Kevin Garnett was traded to the Celtics for Al Jefferson, Sebastian Telfair, Theo Ratliff, Ryan Gomes, Gerald Green, and two first round draft picks. Not me, bubba. I remember it as the day that changed my perspective on life forever.

Alive Days, in some circles, are celebrated more than birthdays. Alive Days are the days when people who were wounded in combat celebrate being, well, alive. For me that day is July 31st.

Nine years ago today I was getting surgery at a medical facility just outside of Fallujah, Iraq. When I woke up after the surgery, the first thing I saw was a baseball game playing on TV. I remember looking at the TV and then to my arm, which was in a long, hard cast, and thinking that everything was gonna be ok. I didn’t feel that way just a few hours earlier. I felt like, dramatic as it may seem considering that the bullet only went through my arm, I might die.

Here’s more of the backstory about what happened that day and the days right after I got shot, if that’s interesting to you.

Anyway, back to the point of this blog.

Unluckily for you assholes I didn’t actually die because now you have to read my content. I first started reading Barstool when I was at Marine Corps Base Quantico about 7 years ago so I’m fucking amped to be writing here now.
Despite what this first post makes it seem like, I’m not here to be the token military barstool bro. That’s the last thing I want and I’m sure it’s the last thing the readers want as well. Additionally it would be a grave mistake to ignore the elephant in the room during my introduction which is the fact that I’ve had vicious and unrelenting diarrhea since Easter of 2007. I cannot wait to travel around and review public toilets for you. By the time I’m done here, you will know exactly which airport, bank, hospital, fast food place and on and on to shit in. I will expose my ass to the worst places so that you dont have to. That’s a promise. That’s a service. 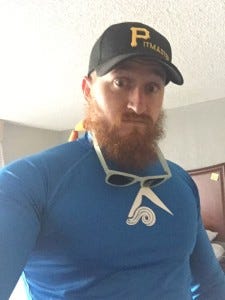 I’m also happy to say that Barstool finally has a Jaguars, Mississippi State, UTSA, Braves, and Orlando Magic fan in the mix rectifying one of the largest flaws in Pageviews’ empire.

Introductions are generally the worst so I’ll keep mine short here and explain more with Big Cat and PFTCommenter on Monday’s Pardon My Take; I will say that having an opportunity like this one come into fruition on my Alive Day is pretty surreal.  Having PTSD and other injuries makes you have some dark fucking days. Today is not one of those days.  Now, let’s get weird and Viva the Stool.