PHILADELPHIA- The Democratic National Convention is great because it offers a stark contrast to the RNC. Democrats are all about the small guy, the average joe who is constantly shortchanged by Wall Street. A major component of the Clinton/Sanders/Chaffee platform is to break up the large financial institutions and introduce a 21st century Glass Stegall bill. No more free rides. No more bailouts. The message was loud and clear: Democrats want nothing to do with being assocated with their greed, and they repeated this clearly and consistantly from literally a sold out Wells Fargo arena.

Last night as a service to all my readers I entrenched myself amongst the Bernie Bros outside the DNC to observe, monitor, and (go back later and use thesaurus to find another word for ‘observe’ and put it in here) the protests taking place as Hillary Clinton was officially selected as the Democratic nominee for President. The mood at the protests varied from frustration, to laughter, to hunger, to fatigue which is coincidentally the exact stages one goes through when a attempt at buying and smoking cannabis.

What is a Bernie Bro? Well, a Bernie Bro, near as I can tell it is someone who supports Bernie Sanders who deserves to be labeled and put into a box so they can be more easly dismissed. Its like calling someone a milleneal except without the connotation that they have a job in new media or any other field for that matter.

Here’s a nice mother and son team of Bernie Bros at the beginning of the protest expressing there frustration with Hillary capturing the nomination: 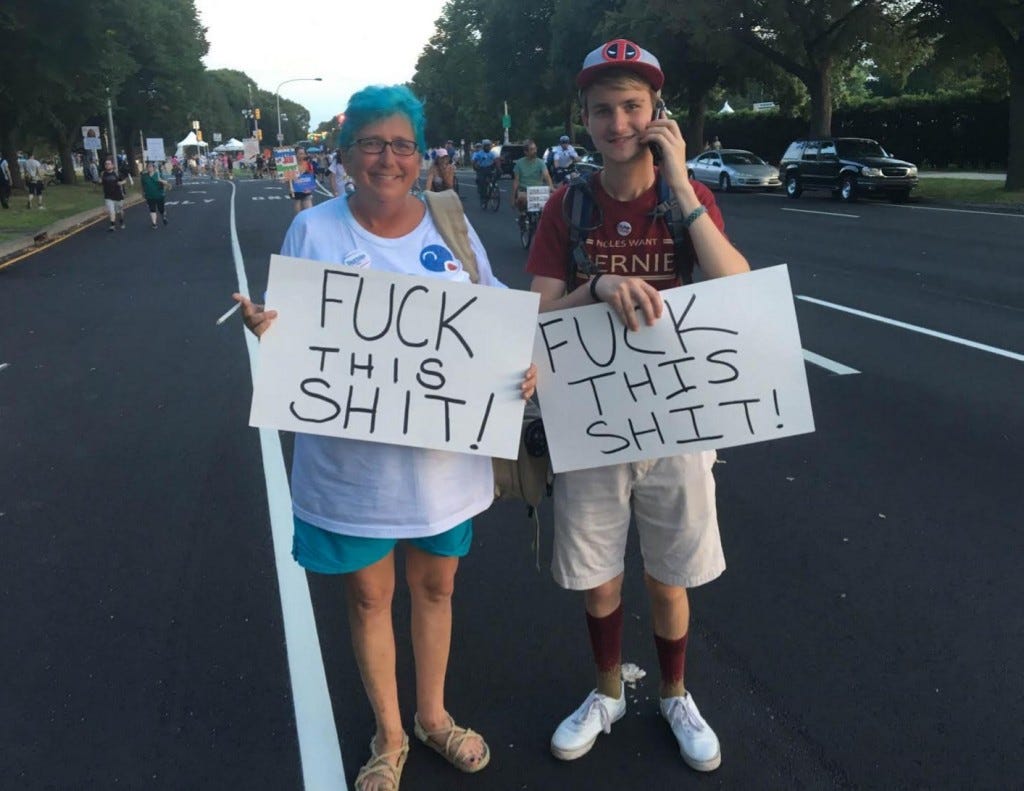 And then I spotted Jon Taffer filming a episode of “convention rescue” right at the gate keeping protestors out: 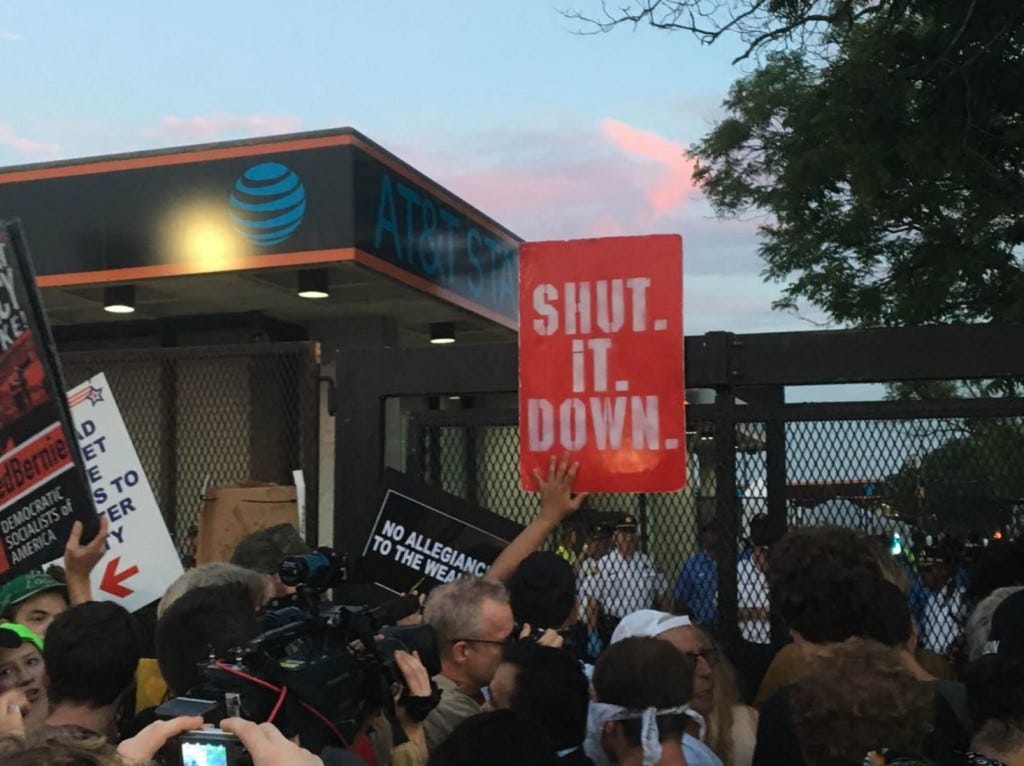 There was some lighter moments like this, and then there was some very dangerous illegal activities like the protestors scaling a fence to intentionally get themselves calmly arrested, proving guess what- walls work. There is no problem that cant be solved with a sturdy wall. Diarreah? Just poop behind the wall. Horny? Just fuck the wall. Basically Sanders campaign was based on the fact that he would be a glory hole but all that was waiting on the other side of this fence was a line of very patient police officers who were handing out free pairs of zip ties to tresspassers- just more free stuff.

The theme of the night was  watching every Bernie Or Bust supporter trying to reach there own conclusion as to what their own personal meaning of “bust” is. Since we’re in Philly its probably just easiest to look at the 76ers roster to get your definition but for some people, “bust” means just go home, and for others it means to get politely arrested for tresspassing and let out of jail an hour later.

Last night they turned there red, dialated eyes to Bernie to see if he would make one last ditch effort at honoring there votes. It was the political equivlant of when Eddie Lacey shows up to training camp and everyone wants to know if he’s fat or not. Fortunately for the Dems, Bernie spent his time swallowing his pride instead of China food and was the one who essentally declared that Hillary would be the nominee. Depending on how recently they showered, the Democrats either believe that Bernie did either the most, or least ethical thing of all time by endorsing Clinton.

The protesters were furious- at Bernie, at the system, at the fact that they were probably going to just eventually vote for Hillary as well. As the crowds dispersed, the somber, hopeless mood at the end of the night can best be described by this protester-turned Bernie-campaign funeral director. Feel The Urn.

Today, we have a electric Tim Kaine speech to look forward to, as well as “President” Obama hopefully apologizing for his wifes failure to acknowledge that the slaves who built the White House were actually very fortunate to of been born in the first place given the statistical nature of only one sperm out of a million impregnating a ovum. Should be another great one folks.