Wow. That’s all you can really say after last night’s episode of Raw. Wow. I’ve always said when they do it right, the WWE can be an incredible TV show. It seems for the better part of the last 3 years, it’s been 80% crap, 20% good. We’ve had bad times, like Batista winning the rumble, and we’ve had good times, like Daniel Bryan winning at SummerSlam. We’ve dealt with Kane being in the main event of Raw week after week for seemingly no reason. But we also got the epic Seth Rollins cash-in at Wrestlemania. And through it all, Raw kept churning out 3 hour show after 3 hour show, some good, some average, some bad. But even when they were good, it never felt like it was a full 3 hours of quality television. Last night was just that though, and it was awesome.

We might be able to say the “new era” actually started on Sunday, when they put together one of the better PPVs in quite a long time at Battleground. But it officially started last night in Pittsburgh, the first episode of Raw since the brand split. A new intro song, a new set, new announcers to accompany Michael Cole, it definitely felt different from the jump, and it didn’t disappoint at all.

Both Fatal Four-Way matches were exceptional. When Roman Reigns won his first match, we all thought it was going to be business as usual. Reigns vs Rollins at SummerSlam, round and round we’ll go. Nope. Finn fucking Balor pinned Roman Reigns clean in the middle of the ring. What a tremendously quick push for Finn, in literally his first night in the WWE, he pinned Reigns, who has been built up as unbeatable for 3 straight years. Also, side note, Finn Balor is 35 (!!!!!!!) years old. I had no clue he was already 35. He looks like a million bucks, I assumed he was like…26? That’s crazy to me.

I was asked on Twitter why we feel so okay with Finn Balor getting this huge push in his first day but hated Reigns’ push. I think it’s pretty simple, nobody set out to hate Reigns’ push. It’s just they botched it so bad with his promos and character, literally nothing about him was ever likable. They were pushing Reigns as a baby face when nothing he did resembled that of a baby face. Balor has the chance to really become a star, and he truly is a breath of fresh air- a young, small, high flying, charismatic wrestler. And very good looking to boot. Let’s pay close attention to how they use him…does he stay face? Does Balor Club form and he go heel? Lots of cool things can happen with him.

Charlotte vs Sasha was incredible. I mean we had Charlotte doing a moonsault off the top rope to the outside of the ring. Sasha did this dive through the ropes that almost killed her. And the match ended with Sasha the GOAT winning the Women’s Championship, a great moment for not just her, but all of us who have watched her climb to that moment. The crazy thing is, they haven’t even begun to scratch the surface with Sasha yet. We know what she can do as a heel from the NXT days, and eventually she is going to be working heel and it’s gonna be awesome. Can we just fast forward our lives to the Bayley vs Sasha feud please? 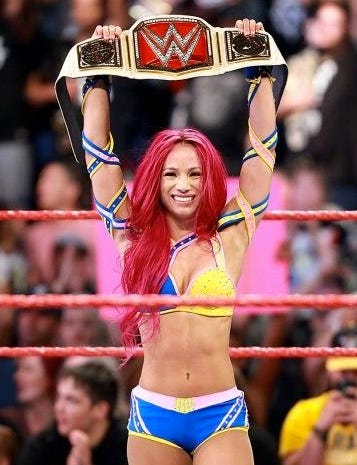 The return of squash matches! 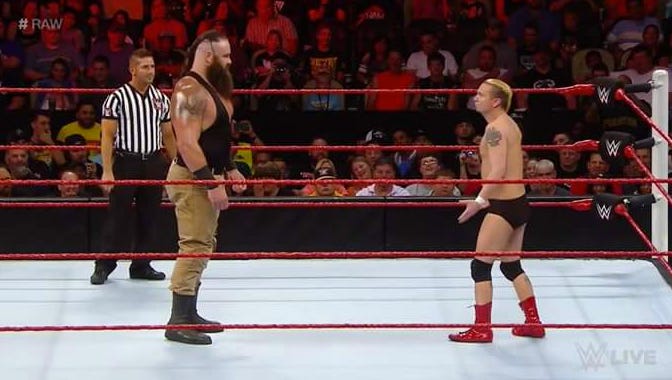 Local jobbers taking pins…meaning wins and losses will begin to actually matter again??! I’ve talked to a friend about this a lot, about how they really should put an emphasis on wins and losses and guys moving up and down the card based on that. I’m going to try to pay close attention to see if WWE plans on implementing more focus on wins mattering.

Tremendously important— announcing was much, much improved. Not having JBL yell nonsense for 3 hours was incredible. Corey Graves will develop a character over time and be great, I have no doubt about that. And Byron not only was good, but having him interview wrestlers in the ring before/after matches adds so much to the show, it was just very refreshing. Even the camera work was better. Not as many of the terrible “ZOOM IN ZOOM OUT ZOOM IN ZOOM OUT” camera shots at all last night.

One last thing- it was so refreshing to have an episode of Raw that was focused on the wrestlers. We saw a little Stephanie and a little Mick, but they let the wrestlers tell the story. Since it was only episode 1 of this new era we didn’t have a ton of stories to follow, but it feels eventually they’ll let the stories lead the show, not a 30 minute HHH promo. Seems like they are putting the big bad authority angle to rest and taking the show in a refreshing new direction.  Oh, and not to mention, New Day AND Enzo and Cass are both also on Raw. So there will be no lack of great promos and bits, as well as good wrestling, which is what a good wrestling show should be.

I am not sure if I’ll be able to watch SmackDown live tonight, but it’s on the DVR and I’ll watch it as I blog tomorrow. Can’t wait to see what they have in store…which is a weird sentence to type about SmackDown.